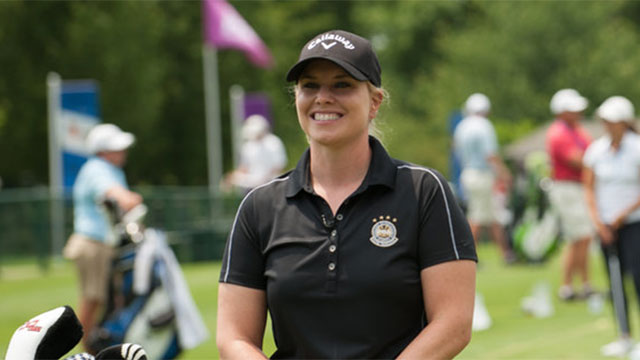 Today was the last day for practice rounds and preparation before the competition begins.

A few PGA friends and I teed it up for a practice round early this morning and had a blast. Lots of laughs and pictures, while taking some solid notes and strategizing the course. The rough is getting longer and the greens are becoming faster.

This was the first full round my caddie was with me, and it was a blast reliving our college days while enjoying the course. We have great player/caddy chemistry and that’s important in remaining focused and calm during an event like this.

The afternoon was abuzz with players getting their final finishing touches on their swings, with many players using launch monitors or pressure plates to check data. I thought it was interesting to see last minute shaft changes and putter changes, all to get that edge on tomorrows round.

The player hospitality is off the charts with any food and beverage desire catered to. The smoothie and milkshake bar is a hit with all the players.

The KPMG Leadership summit was quite popular with some big name speakers like Dr. Condeleeza Rice and Mia Hamm making appearances. And of course PGA President Suzy Whaley is everywhere, representing and doing a wonderful job.

I enjoyed a late afternoon of prepping for tomorrow, completing a short meditation, and marking golf balls before enjoying dinner with the family. I’ll be able to sleep in a bit for tomorrow round as I don’t tee off until 3:06 p.m. and hope the weather stays away.

Look forward to teeing it up tomorrow!

Read Alison’s lesson on how to “change” your putting stroke.