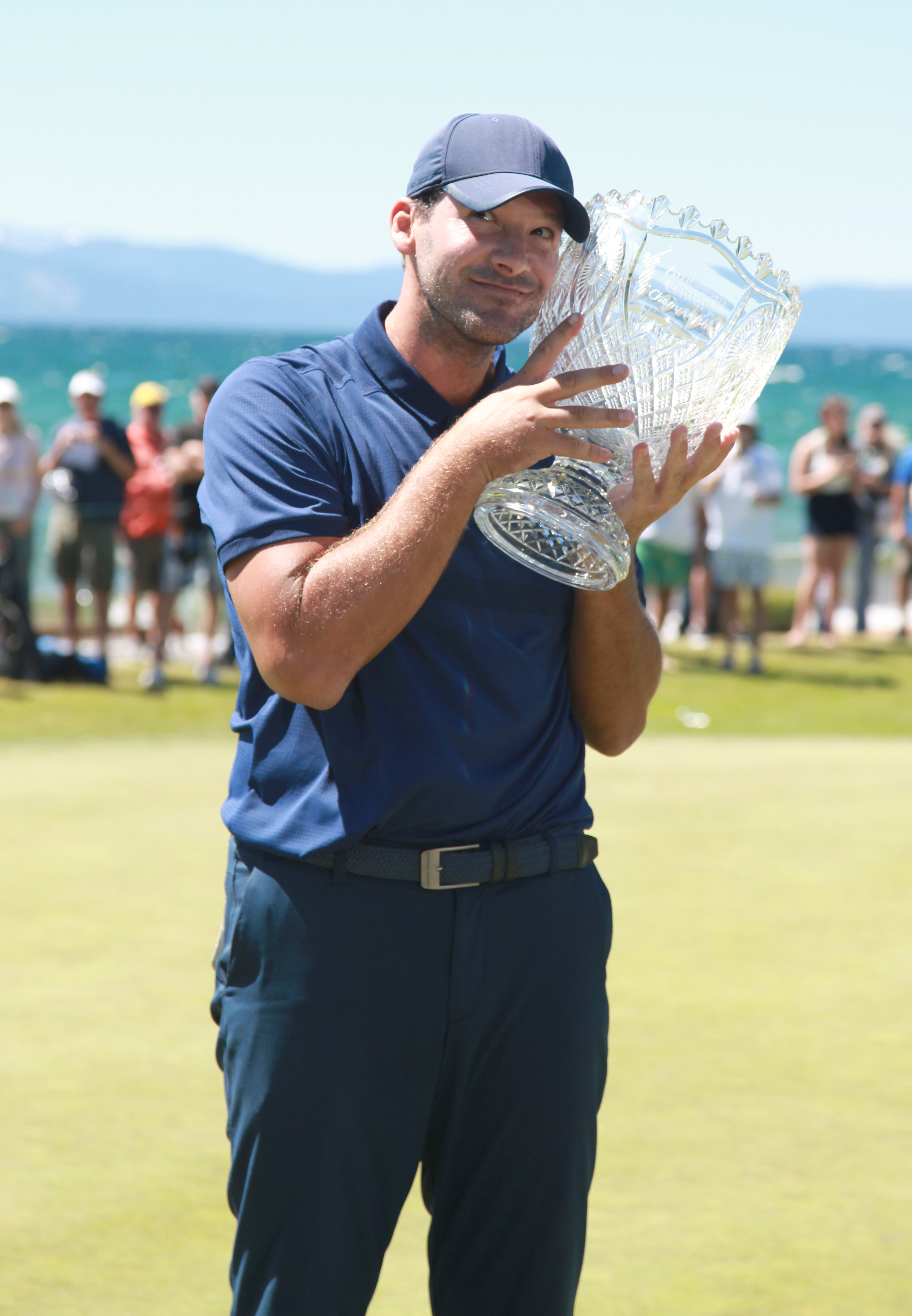 In the 30 years I’ve attended and covered the American Century Championship at that eternally gorgeous mountain jewel known as Edgewood Tahoe, I’ve seen some excellent celebrity golf, a lot of pretty good golf and a helluva lot of really bad golf.

That’s not only cool, it’s really the point.

I think most people who show up every July on Lake Tahoe’s lapping shores in shorts and flipflops — and more than a few sports jerseys emblazoned with the name of one hero or another — care far more about connection with the faces they see on TV, or perhaps in their local arenas, than they do about the game of golf itself.

A record 60,000-plus unabashed, beer-swilling and autograph-seeking fans showed up at Edgewood last week, and I can safely assert that not one of them was there looking to pick up that one mental image, or witness that one shot or strategic decision, that would push their own game to the next level, whatever that means (breaking 100? 90? 80?).

They were there to see their three-pointer-shooting, touchdown-tossing, goal-scoring (and script-reading, in the case of stalwarts like Jack Wagner) favorites brought down to somewhere near their own humble station in life.

Because golf, after all, is the most humbling of sports.

Unlike a PGA Tour, LPGA or high caliber amateur event where most swings look alike (at least to the untrained eye) and the proficiency-talent-hard-work-and-data-driven quotient is far beyond the average soul’s reckoning or imagining, the celebrity “tour” is where even the best players fall far short of where they’d need to be to truly compete with the Bubbas and Phils and Tigers of the world, and we love them for it.

Yes, Tony Romo is a damned fine golfer. He’s now won two ACCs in a row, which is two more than any NFC Championships he’s won, but a recent berth in a big Tour event laid him low.

Same deal with baseball hall of famer John Smoltz, who qualified for last year’s U.S. Senior Open but missed the cut at the Broadmoor by a tape-measure homer.

Former pitcher Mark Mulder has taken the Tahoe title three times, but even he’d admit he’s nowhere near the birdie-binging stratosphere where only the greatest sticks can soar.

Steph Curry has three NBA titles and five straight finals berths to his name, and he could conceivably win this thing one day (he notched another top 10 this time), but he could practice every day for a year and I’d venture he fall well short of true Tour-caliber capacity; he got a feel for just how tough that circuit is at a Korn Ferry Tour event in the Bay Area last year. Like his fellow NorCal sports immortal Jerry Rice, he came nowhere near making the weekend.

Ask any of the ACC’s previous winners whether they had the right stuff to play for real with the cream, and they’d say no. The all-time ACC title champ, former Dodgers pitcher Rick Rhoden, got it done time and again at Edgewood with a swing that would draw howls from Mssrs. Haney and Harmon. Doesn’t matter — he had the guts and game to get it done among his peers, and that’s all he needed. He had a brief stint on the Senior Tour, with predictably less-than-stellar results, but on the celeb stage, he shined.

In truth, among the 80-plus players who tee it up at Tahoe each year, perhaps a dozen are capable of winning. And even they display telltale cracks in their game when the pressure mounts.

Romo, for instance, was just like everyone else on Edgewood’s raucous par-3 17thhole on Sunday, coming up well short into a stiff mountain breeze, leaving himself a tricky back-of-the-front-bunker lie. It took him two to get out, and though his second blast was nifty indeed, coming to rest inches from the cup, a Tour stud would’ve escaped in one.

The point is, even the best of the celeb bunch couldn’t figure out how to find the putting surface on that hole in the hour-plus I watched groups come through. They either under-clubbed, hit skull-screamers through the green or sprayed one onto the beach, among the bikini’d and Bud-spilling masses.

And people loved it. They were watching their otherwise unassailable superstars struggle at a game they mightily struggle at themselves.

On the other half of the course, a legion of celeb über-hackers limped home with more than a few of their hardcore fans in tow. Celeb chef Bobby Flay looked positively whipped after a pick-up double on the par-3 7th. Ray Romano, who was playing with Flay, offered to pay a kid in the crowd $100 if he somehow buried the 40-footer facing him. Ol’ Ray three-jacked instead, the second putt from less than three feet. Everybody loved it.

Then there’s the king of the downtrodden-but-jovial star hacks, Charles Barkley, who actually showed signs of getting out of the cellar with a first round 92 before returning to his normal, flailing, hard-to-watch ways, ending up with -66 Modified Stableford points — amazingly, still good enough to beat two other players, DeMarcus Ware and “Today Show” talent Dylan Dryer.

And there were many more in the field closer in skill and scoring ability to Charles than to Romo, runner-up Mulder or third-place sharers Mardy Fish and Derek Lowe.

Yeah, they suck. But we love them for it.

We’ll keep loving them. We’ll be back in droves next year to watch the best 10 do their good-but-not-Tour-like thing with a sort of reality-based admiration … and the remainder of the field duff, skank and chili-dip deeper into our hearts.