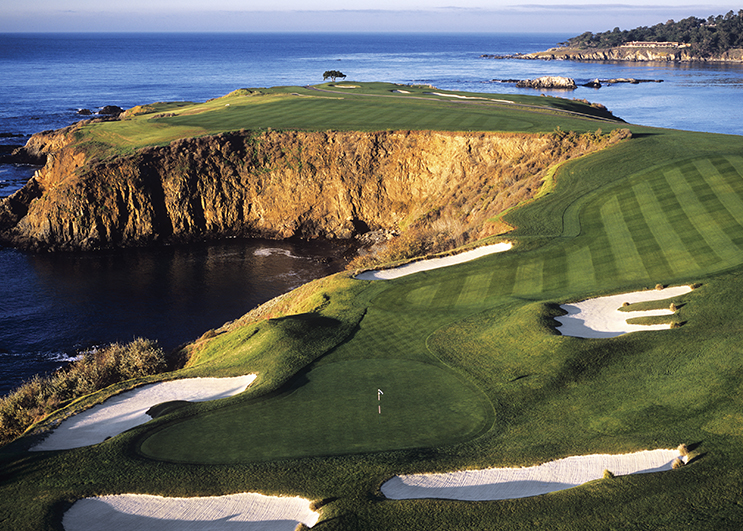 Ask any truly connected golf insider out here in the Wild West, especially in Northern California, who Jim Langley was, and it’s a safe bet a big smile will cross their face — a reflection of the man’s own smile, which never seemed to fade, right up to his death at age 75 in 2013.

For 34 years he was the PGA Head Professional at a little ol’ course called Cypress Point, scoring one of the game’s plum jobs after several years on the PGA Tour — he secured his card in the tour’s very first Q school in 1965. He welcomed players from all strata of society to what is perhaps America’s most beautiful and blessed stretch of golf real estate, right around the corner from Pebble Beach, and treated them equally with a soft-spoken, self-effacing grace that I was fortunate to witness in 2011 before his death, during a media event at Silverado Country Club in Napa, which hosted the fourth edition of a fundraiser tournament established in his name.

The man simply and humbly loved golf, the people who played golf and the life the game led him to live.

This week, Aug. 12-13, The Langley — A Tribute To Legends celebrates its 12th year and eighth straight at Pebble Beach with a gala gathering at the Beach Club Monday night (hosted by longtime Tour vet and TV color man Peter Jacobsen) and pro-am Tuesday morning. It boasts its biggest field yet, 160 players, who paid handsomely and gladly to support veterans through PGA HOPE, a program in which PGA instructors receive special training to teach and coach disabled and able-bodied vets to, says the tournament’s website, “help their social, physical and emotional well-being.”

Why this particular charity? Because after a near-fatal automobile accident in 1987, Jim Langley himself was a physically challenged golfer. He lost the use of his right arm but went on teaching, and playing, until his retirement. He also supported several local charities, both through his church and through golf itself, including The First Tee.

Each edition of The Langley honors two legends of the game, either as players or patrons of its traditions, or both; this year, two native Californians get the nod: Two-time major champion and 16-time PGA Tour winner (including five wins at the Crosby/AT&T National Pebble Beach Pro-Am) Mark O’Meara, and former real estate developer and San Francisco Giants owner Bob Lurie. They join an impressive list of honorees indeed — Arnold Palmer (the very first one, alongside Langley himself), Jack Nicklaus, Johnny Miller, Tom Watson, Ken Venturi, Hale Irwin, Billy Casper, Nancy Lopez, Patty Sheehan and others.

As this year’s event approached, O’Meara and Lurie talked about what the game means to them, how it transcends the divisions and political strife that plague us (now more than ever, it seems), what makes Pebble Beach so special, and why they’re so thrilled to be honorees.

O’Meara: “Jim Langley, to me, is a legend. Growing up in Southern California, I didn’t really know who he was until getting up there until 1977 or 78 when I came to the Monterey Peninsula. There’s no place prettier. What he meant to Cypress and the Peninsula, was incredible.”

Lurie: “I’m delighted and honored and surprised [being an honoree] happened, with all the people that have gone before me. I had the honor of knowing Jim all the years I played Cypress. He was always upbeat and delightful to be with.”

“The game, fortunately, is better because of Mr. Langley, but also because of the people involved, whether it’s a professional golfer, an amateur, a businessperson, people in the political world, the entertainment world, other athletes — they all gravitate toward the game of golf, because it’s a lifetime game that, to me, teaches you about life. I didn’t start playing until I was 13, but golf became my friend. And you couldn’t have a better friend. I owe my whole life to the game, and am thankful I was able to play it reasonably well.

“To be an honoree, to understand your responsibility as a golfer and human being, to help people move forward, that sets golf apart, and I’m thankful for that. We can all play together. It doesn’t matter if you’re a professional, amateur, man, woman, child — you can learn to play this great game for a lifetime.”

Lurie: “You can tell so much about a person playing golf — what his character. I’ve had the pleasure of playing for 70 years. It’s very different from tennis or anything else. It’s a pleasure to play.

“I started playing golf while in the service in Washington, D.C., after graduating college. Played tennis starting at 5, and continued playing after taking up golf, but I loved golf so much I haven’t picked up a racquet in 25 or 30 years.”

O’Meara: “I’ve traveled all over the world, but when people ask me what is my favorite course, of course it’s always gonna be Pebble Beach. In 1984 I won the Pro-Am, came back and won the Crosby in ’85, with Nathaniel [Crosby] there — I became a friend of the family. Then to go on and win four AT&Ts … when Phil Mickelson won this year for the fifth time, I texted him and said, ‘That’s great.’ He said, ‘It’s about time I tied the old man.’ I said, ‘I think it’s awesome, but you don’t have to win any more.’ It was always fun being the Prince of Pebble Beach.

“I was playing with [Ben] Crenshaw one year, and we were teeing off on No. 4, near the Beach Club. A spectator yelled ‘O’Meara, you own this place!’ I looked up and said, ‘That’s really nice, but if I owned this place, I wouldn’t be playing professional golf anymore, I promise you that.’”

Lurie: “Being at Pebble Beach, growing up in San Francisco, it was a thrill. I played with a lot of different golfers, including Palmer and Watson one year. Also played several years with George Burns. I always enjoyed the experience. It was just perfect.”

I asked both gentlemen about the idea — which someone, I can’t recall who, brought up in a Tweet on the heels of this year’s U.S. Open at Pebble — of including the course in a four- or five-course rota for the national championship, along with Shinnecock Hills, Winged Foot and perhaps Oakmont.

O’Meara: “The USGA has done a tremendous job. I know there’s been a few tough years as far as course set-up. I don’t think it would be a bad idea to go to four or five of the great golf course we have in this country, and rotate among those five, but I also know that somebody’s always trying to grow the game so they’re trying to cover different venues and places. It’s such a big production now that they’ve got to have room to be able to do all the necessary things that make a major championship special. I can understand them going to new venues to see if they can grow their base.”

Lurie: “To rotate to some of those courses is certainly a good idea. I’ve never thought to move the AT&T to some other place than Pebble Beach, which is where it belongs. But those other courses are terrific [for the U.S. Open].

Finally, O’Meara talked about what his life in the game has done for him:

“This is my 40th year paying professional golf, and I’ve been lucky. I made that putt on the 18th hole to win the Masters [in 1998], and certainly winning the Open that year was a great moment, but at the top of my list is, in 1990, I came back to play in the Pebble Beach pro-am, and I had my father come and play with me. I played with him twice, and he made the cut both times — in ’86 and ’90. But in ’90, I was in the last group leading the tournament. I went on to win, and had my dad right alongside me as my amateur partner. I just don’t know of many other sports where you can have that opportunity.”

Somewhere, Jim Langley is smiling yet.