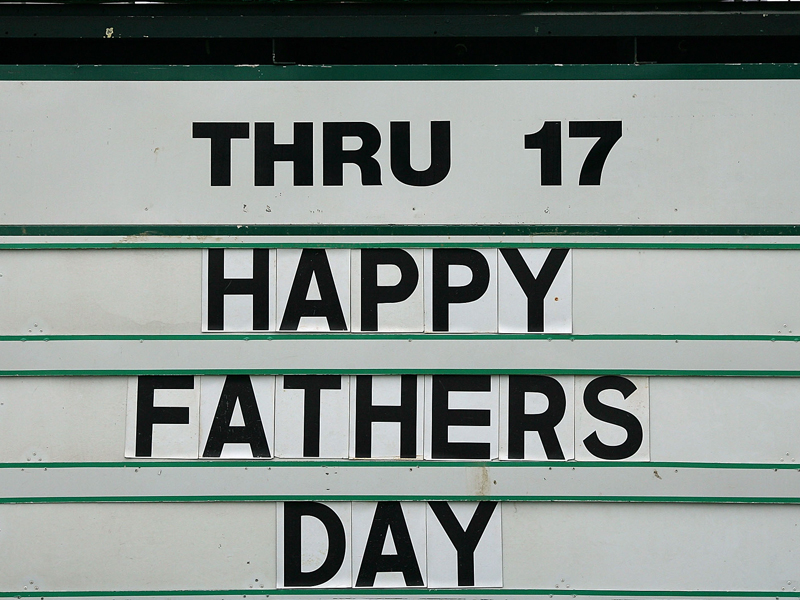 As both the U.S. Open at Pebble Beach and Father’s Day approach this weekend, the following guest column by author Michael Conlon celebrates the bond between father and son — and people and golf — that this annual confluence of championship and familial holiday always creates. Enjoy.

Father’s Day annually coincides with the United States Golf Championship, one of the major golf tournaments held in the United States. On late Sunday afternoon, there is often a touching embrace between the man holding the trophy and his father, along with the announcer’s fond recounting of the elder man’s influence on his son’s career.

My late father was an avid golfer. We once both won our divisions in a local tournament and he brimmed with a proud smile at our father-and-son victory. I could never quite conquer the game of golf, a sport he urged me to play after a teenage bout of epilepsy ruined my hopes on the gridiron. Rather, my glimpse at golf glory would come in a different form.

Golf is like gravity. It pulls you into its orbit when you’re not even noticing. Once you’re hooked it’s an addiction that’s hard overcome.

I consider myself a recovering golfer after many up and down rounds in my life.  There is something magical about striking that one fine shot close to the pin. Unlike any other sport, amateurs can play on the same course as the professionals do. It’s no longer a male, white, privileged sport. There’s nine-hole beer leagues like bowling, weekday golf scrambles with post-game barbeques, and golf ranges on rooftop bars.

Tiger Woods shattered any color barrier by winning fifteen majors and countless tournaments and joining the conversation as arguable the best golfer of all time.

When I was a mere fourteen years old, I caddied for a professional golfer in the PGA Championship at Oakland Hills Country Club, the last of the three summer majors. My dad followed my group around snapping photographs, four of which survive to this day.

So what in the world was a fourteen year-old caddying in this high stakes tournament in 1979? Kids that young do not caddy in a major championship. I did not caddy for my dad, a rank amateur. The cosmos just lined up for me that hot August weekend.

One factor on my side is that not all golf professionals, particularly the club variety, employ their own traveling caddy. Plus, some golfers want a club caddy because the local caddies know the contours of the greens and the blind hazards on the course. (For example, at Oakland Hills always play your ball short on 14 or you’ll end up across the slick green in Bogeyville.)

Getting the Major Bag did involve several hard summers of toting the heavy bag.  I’d worked my way up through the caddy ranks to honor rank.  It’s all a blur now, but one of the staff knew my family so perhaps that didn’t hurt.  I don’t really know for sure. What I do recall vividly is how scared to death I was caddying for George Shortridge (one of the finest club professionals ever to hail from Minnesota) in golf’s version of the World Series.

On that first morning, Mr. Shortridge warmed up on the golf range. A few practice shots later, the most famous golfer of all time came striding up in his trademark yellow, polyester golf pants along with his famous caddy, Angelo.

My Dad first set eyes on Jack Nicklaus when Jack was fourteen and becoming a local legend at the Scioto Country Club in Columbus, Ohio, where they were both members.  Watching my golfing idol hit ball after ball was a highlight. But what I recall the most was Mr. Shortridge acting like he didn’t notice the Golden Bear. He was there to beat Nicklaus, and just kept hitting missiles with his 5-iron straight as an arrow. Take that, Jack.

George Shortridge tied Nicklaus after the first round with a one-over-par 73. After missing the cut by a few shots on Friday, he gave me his failed putter, which I’ve played with until two years ago when it inexplicably disappeared, and I felt like I’d lost my pet rock of thirty-five years.

Australian David Graham won the 1979 PGA Championship in a sudden-death play-off against poplar tour player and future two-time Masters champion Ben Crenshaw.  Mr. Graham’s father didn’t greet him on the 18th green at Oakland Hills Country Club to congratulate the first Australian to win this prestigious event.  In fact, he hadn’t even spoken to his father for years due to some family rift.

How sad is that?

A love for golf is something my father and I shared together until he passed away several years ago. We always watched the final round of the U.S. Open together because it always ends on Father’s Day.

Golf is something a father can share with his son or daughter. If your dad enjoys golf, spend Father’s Day with him watching the U.S. Open. It might just be the best gift you can give him.

Michael Conlon is the author Looper: A Coming of Age Novel, available in paperback and e-book on Amazon.