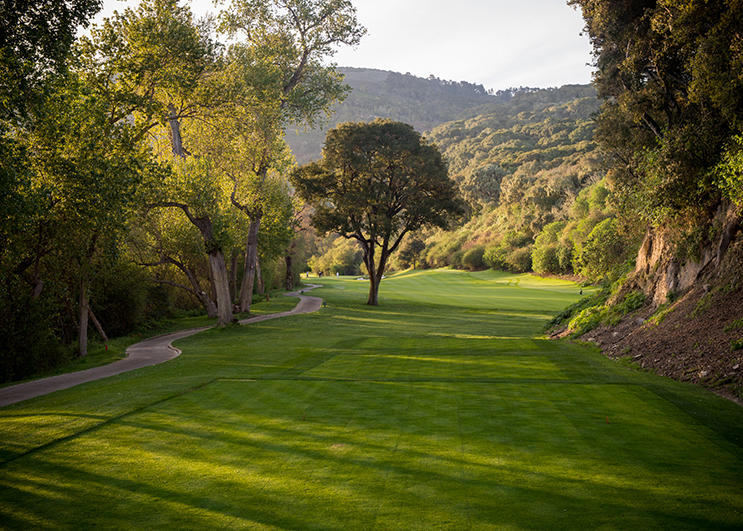 Robert Muir Graves sure got around Northern California during his 30-odd-year run as one of the region’s top golf architects. He had a hand in scores if not hundreds of public and private layouts, displaying a knack for turning virtually any Golden State terrain, from piney Sierra foothills to verdant coastal valleys, into a solid, workaday routing that fit any day-to-day member’s or weekend hacker’s game and aesthetic. Nothin’ fancy, just straightforward, classic golf. A good starting point to sample his work? Quail Lodge, located in Carmel Valley just a few miles east of the Monterey Peninsula.

Five decades ago, Graves spread 18 fine, fairly flat holes lined with old-growth sycamores and oaks and the occasional eucalyptus occupying the former farmland purchased by founder Ed Haber. He kept the course’s 66 bunkers pretty much on the sidelines of the broad bentgrass fairways and poa annua greens, a design standard of the day. He put several scenic ponds in play and framed many holes with surrounding hills that, thanks to a mix of moist of marine air and ample sunshine, glow green pretty much year-round.

Over the ensuing years Quail Lodge gained a well-deserved reputation as a getaway within shouting distance of Pebble Beach and its peninsula brethren, but secluded enough to keep the Carmel Valley’s more bucolic culture intact. It also started to show its age, as all courses do. Graves had built it with a solid bone structure, but with today’s modern club technology rendering so many design elements irrelevant, a facelift was in order.

“I would say we wanted to heighten the character, raise its memorability so you remember more holes,” says Todd Eckenrode, the Long Beach-based architect whose Ori-gin Golf Designs was hired by Quail Lodge’s new owners, Hong Kong and Shanghai Hotels, to rejuvenate the course for modern eye without erasing the late Graves’ original player-friendly design personality — and bring its look and feel in line with that of the 93-room lodge’s $28 million modernization. “One of the things we did to do that was the bunker project. We wanted to give a classic, old school feel to the bunker style, then we ringed them with fine fescues to naturalize them, look less maintained. We really tried to vary the size and scale of them — now there are really big ones and some very small ones. And the location of the bunkering: really trying to engage the golfer more, get them in play, in the centerline. So many greens were bunkered front-left, front-right. We generally chose one side to bunker dramatically, create some risk-reward elements, and really open the other side, so lesser players can take that route.”

With the help of Quail Lodge superintendent Denis Kerr, Eckenrode and his team also created some much-needed elevation change. They pushed tees up against hill-sides on holes like No. 10, a fairly short par 4 with a huge tree standing sentry down the left side, no more than 75 yards from the middle markers. But the biggest visual shift comes right away in the round, on holes 1-3, where a fairly deep grass swale meanders alongside the driving lanes, crosses in front of approach zones in just the right places and, in concert with the new bunkering, makes Quail’s opening trio much more en-gaging and interesting. Finally, they cleared out more than 20 acres of turf to not only save water but make the whole course much more of a visual feast.

“When you have courses that are all turf, it’s different to get memorability, but the framing aspect now, the sense of naturalness, is really going to help this place as it matures,” Eckenrode says. “We also created short cuts around the greens, which creates more interest among members and visiting players. Before it was all rough. Now we want you to putt it, take a rescue club or a 7-iron or whatever, instead of just taking a sand wedge and hitting a lob shot every time. And it gives the course a really elegant look.”

Eckenrode nailed each of these three main redesign points. From the very first tee shot over, around or into a big, gnarly cross bunker, Quail Lodge is more fun than it’s been in many years. No. 4, a downhill par 4, benefits from less water and more sand in play. Hole 16 is a big-boy par 4 sporting yet another perfectly place cross bunker in the fairway and a green nudged up into a hill, while No. 17 is as lovely a mid-distance par 3 as you’ll find in the golf-rich Monterey area. “Most people remember it as a lake hole, but a typical hole,” Eckenrode says. “That’s one place where we added a swale, with drought-tolerant native up the left side, which gives it so much more character.” The final hole is a conversation piece, too, and has been since a gal named Doris Day built a home high above the tee. Not overly long at 362 yards from the tips, it’s distinguished by a gorgeous old eucalyptus to the left of the fairway, with just a hint of a water hazard near the green — still there, but not overwhelming. In other words, it fits the vibe of what a Carmel Valley resort should be.

Quail Lodge dials up that vibe to perfection, and while its freshened golf course is a big reason, it’s far from the only reason. From the upscale yet casual dining at Edgar’s to Director of Instruction Katherine  Mar-ran’s couples-friendly golf academy to the pool, tennis center, fitness center and hiking and horseback riding trails, the elements that make a Northern California escape so distinctive are on full display. Get ready to relax, and chase Old Man Par, in style.