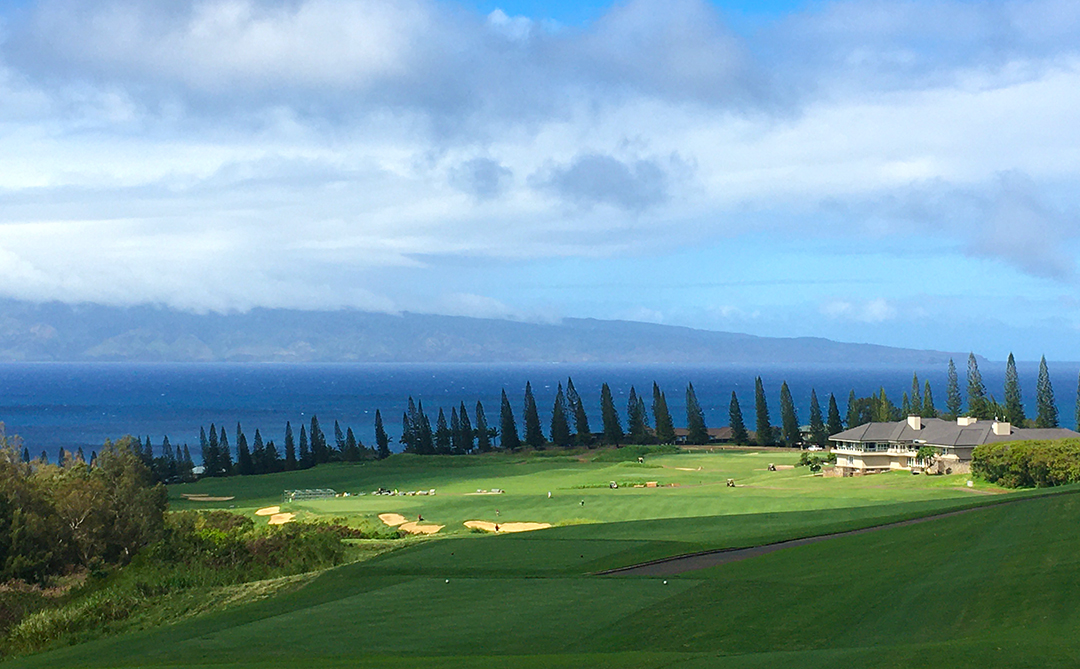 The Plantation Course at Kapalua Resort isn’t all rainbows and unicorns.

OK, it does produce its share of rainbows, right after a tropical downpour, framed like a full-color island fever dream by the churning Pacific.

And among world-class destination layouts, it is quite singular in setting, style and sheer size of its footprint upon the land, at least among its Hawaiian brethren.

Not a unicorn, however. It actually exists. Thank God.

And after nearly 30 years, the first major design from Ben Crenshaw and Bill Coore returns from a nine-month renovation just in time for the 2020 Sentry Tournament of Champions, Jan. 2-5.

Overseen by Coore and Crenshaw and carried out by Troon Golf’s Design, Development and Agronomy team — with a huge assist from former Tour player, Golf Channel on-course commentator and 40-year Kapalua resident Mark Rolfing, who knows the site better than anyone — the overhaul brought changes to every hole, from “calmed” green undulations to repositioned, removed and brand-new bunkers.

Rolfing says the project was powered by “somewhat conflicting” goals: “to make it more playable for the recreational golfers and more challenging and difficult for the best players in the world.”

Mission accomplished on both fronts, to a point.

Traversing the broad shoulders of a former pineapple farm, the Plantation remains a beautiful and beguiling beast. It’s a journey rife with wide-open paradise views that enhance every round, but can quickly derail it if one doesn’t keep focused on the many shotmaking options at hand, then choose wisely depending on which way the wind is blowing and what’s between you and the pin, which now enjoy more potential placements from green to green.

“The entrances to those greens are an integral part of the experience – for the golfers who play 15,000 rounds there a year, and for the best in the world,” Crenshaw said about a week after the Plantation reopened in November. “If you know where the breeze is coming from, and you can plan the shot, that’s the key to playing there, under adverse conditions. It’s the most interesting way to play.”

In other words, it’s a delicious challenge to any golfer who steps up on that elevated first tee and stares down, down, down at the first fairway, with a new carpet of TifEagle Bermuda in the foreground and the ocean and islands of Lanai and Molokai beyond.

“Bill and I are proud of the fact that Kapalua offers a different test of golf for the tournamant player,” Crenshaw continued. “They have to play imaginative golf. It’s not, hit it A to B and expect it to stop next to the cup. They don’t find anything else like it during the year.”

After years of watching its previous year’s champs bludgeon many of the par-73 Plantation’s wide, fast-running downhill fairways with freewheeling tee shots and even reach some of the flatter or uphill par 4s in two shots – last year’s winner, Xander Schauffele, finished 23 under par, including a final round 62 to tie the course record and beat Gary Woodland by one stroke – the PGA Tour asked Coore and Crenshaw to find ways to combat the bomb-and-gouge onslaught.

“We didn’t know going in what they wanted, what they wanted us to do,” Coore said. “We were trying to restore it, and they were amazingly supportive. All the officials who consulted with us, their big goal was to get more pin placements on the greens. We were able to do that with their influence, but they didn’t say, ‘You have to do this or that.’ Some of the greens had shrunk dramatically. But we wanted to recontour the greens not only for the tournament, but on a day-to-day basis.”

The result is definitely a more pleasing putting experience for the daily player, with fewer buried elephants to negotiate. Still, the surfaces remain, on average, links-large to accommodate the strong trade winds that develop most afternoons – hence their adaptability to a wide swath of approach options, including the well-placed run-up that gives the average player a fighting chance from longer range.

Back when the Plantation debuted in the early 1990s, the ground game was in play for everyone, including the pros. Then they all started blowing it out there 300-plus yards.

“The ball goes so far, they could use the ground to their advantage,” Coore said. “You could see the joy and amazement in [average] players watching the ball land short of the green and rolling up. But then it got harder for the resort player and easier for the top player.”

“It’s almost preposterous how deep people can hit the ball now. But the top five or six people will [still have to] putt well, but their approaches need to be well thought-out and well-played to set themselves up to be aggressive with the putter. I’m really interested in watching guys putt on [similar uphill holes] 10 and 13. Playing to them is relatively the same, but they will have to putt with more imagination. There are new contours where you’re rewarded for a good shot.

“Australian players used to do well here – Stuart Appleby three straight times, Geoff Ogilvy twice – the way the course used to play,” he continued. “Australians, South Africans, European guys could adapt to using the ground, hitting different types of shots. The Plantation Course was controversial. It was different. It will be interesting to see this year; if the wind cooperates it will play differently.”

In terms of individual hole tweaks, several will, no doubt, stir plenty of talk among the big boys.

The biggest and boldest is a new bunker smack-dab in the middle of the par-5 fifth fairway, some 300 yards from the back tees, which will force Tour studs to either lay up, try to muscle over it or, more likely, pick a lane – with a big ol’ ravine up the hole’s entire right side.

“That tee shot wasn’t totally mindless for players of that caliber, but there was no way they had to challenge that ravine on the right,” Coore said. “There needed to be a point of interest out there, to make them think about it a little.”

Added Crenshaw, “That bunker’s there to make them scratch their head. There’s a great line that Dr. [Alister] Mackenzie wrote about a central hazard: ‘You’ve got to make a special effort to avoid it.’ They’ll say, ‘That bunker is right where I hit it.’ Well, that’s why it’s there!”

Of the Plantation’s three other par 5s, the famed, downhill 18th underwent the fewest changes, including a 1,200-square-foot green expansion to allow more pin placements. No. 9 gained new back and forward tees and the left fairway bunkers were pinched in to tighten the second-shot angle a bit. No. 15 is probably still the best three-shotter out there, benefitting from some new “landforms” in landing areas, one extra fairway bunker, one less greenside bunker and a slightly smaller putting surface. The big swale about 100 yards below the green will still swallow plenty of lay-ups, so if anything, the hole is a tad tougher for amateurs.

The best overall hole, by far, remains No. 17, the sweeping, downhill par 4 with top-of-the-world views, wide ravine guarding the second shot and easily the most “fun” green to find with one of those come-up-short-and-roll-on approaches that have made the Plantation such a joy to play back when it opened, and again today.

“The goal was to recapture the main playing characteristics of the course,” said a “sentimental” Crenshaw, who married his wife at Kapalua and relished the opportunity to return to the scene of his first design with Coore. “Using the slope and ground to feed balls to the green can be used to the resort player’s advantage, and yet for the best players it creates an element of doubt, that perhaps makes it a little more difficult for them.”

Coore also loved getting another shot at the one-of-a-kind site that, perhaps second only to Sandhills in Nebraska, launched them to the top of the design heap.

“We look back and say, ‘How did we pull that off?’” he said. “Thirty years later, for us to be there, working on it, and see people come back to play it again and again – and to see the same guys who worked on it back then, in their 20s, who are now in their 50s, working on the same things, is very rewarding.”

Beyond the Plantation: More golf, island luxury and whale cruisin’