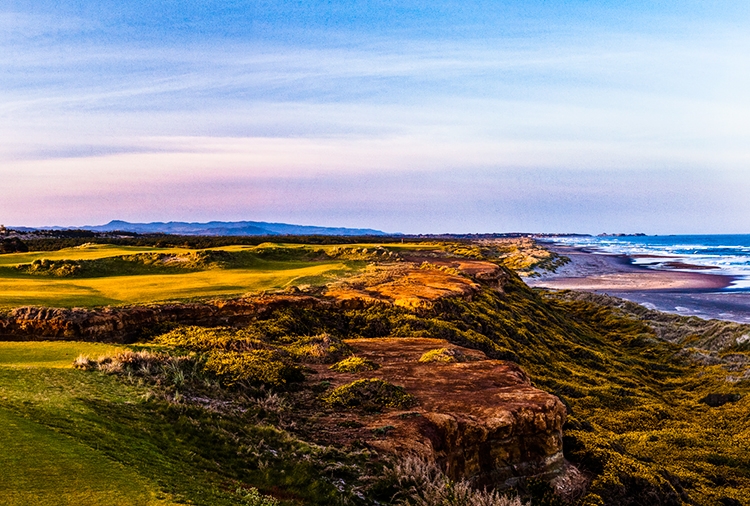 December 22, 2015, the first full day of winter, shortest day in the Northern Hemisphere’s year. And here we were, teeing it up on the southern Oregon coast, perhaps the most famous stretch of it perhaps, at least for golfers: Bandon Dunes. It was my idea, originally — play one of the four full courses at this incredible, remote, suitable-for-serious-players-only resort on the shortest day of the year, which I had mistakenly pegged as Dec. 21, its usual spot on the calendar. Then the good folks at Bandon and its operating partner, Kemper Sports, upped the ante: How about nine holes on each big course, then finish with one last shot to the final green at the subline 13-hole par-3 Preserve, alongside longtime PGA Master Professional Grant Rogers?

Sounded great, and we had it all set, but the weather that day was brutal even by Oregon winter standards. Drenching rain, winds howling at 40, temperatures barely nudging 50. I’m crazy, but not that crazy, so we went with Plan B the next day: All 13 Preserve holes with Rogers in the morning, lunch, then a full 18-hole circuit on the granddaddy of them all, the original Bandon Dunes, the front nine of which I’d play with Michael Chupka, Bandon’s marketing chief, and the back by myself. The weather forecast called for spates of rain, less wind and relatively moderate temps, at least until later in the day. Worked for me.

The four of us had the Preserve to ourselves — I dragged my non-golfing brother, Gil, and nephew Clayton along for the morning good walk unspoiled — as we hit the first tee at 9 a.m. Right away Rogers set a playful tone in the drizzly gray, asking Chupka (who was just there to wish us well) to hit his first shot, which he stuck about six feet from the pin. Having not touched a club except to practice in nearly two months, I managed to find the putting surface as well. “Good swing,” Rogers said, then turned to Gil and Clayton, pointing at the green.

“Look out there. What do you see the architects telling us to do, or not do, on this hole?” he asked. “Well, avoid that bunker,” my brother said. “Don’t hit it in those dunes.”

Suddenly our little round in the off-and-on rain — on what’s arguably the most spectacular stretch of dunes on the entire Bandon property — turned into an impromptu playing lesson for the newbies, and a fine refresher for me. No mechanics, just tidbits about feel and vision and always trying new approaches to this or that shot, with ample asides about gamesmanship — such as always complimenting your opponent’s play so his guard is down as you step on his neck.

Rogers, who’s been a teaching pro at Bandon for pretty much the duration, is part guru and part geek. It’s like playing with Shivas Irons’ cousin. He’s matter-of-fact but even the wraparound shades can’t hide the twinkle in his eye. On the first green he had Gil and Clayton striking putts in the stiff and awkward stances of rank beginners, with no sense of direction of speed control, but by the time we got to the sublime sixth hole — the Preserve’s closest brush with the churning Pacific — they had improved 100 percent, getting the ball near the hole. On No. 10, Rogers’ own 25-foot putt carved a dew-line to the cup, and Gil took one look at it, pulled the putter back and buried the bomb.

Of course, all this Rogers Magic rubbed off on me, and I played pretty well on the Preserve, then on Bandon’s front side with Chupka, plus the first couple back nine holes on my own. As the skies darkened, the wind freshened and the serious rain came, my game went south in a hurry, but I wasn’t about to throw in the soggy towel. I was at Bandon, my favorite golf destination on earth, led forward by Rogers’ mantra — enjoy the design, use your head to get around obstacles. I hit some amazing shots down the stretch and made a few putts. I took the bad with the good, finishing with a couple bogeys that felt like the most satisfying pars ever. Gil and Clayton met me at the door to McKee’s, Bandon’s original tavern. The dark beers my brother and I shared there, as the rain waned and the sun peeked out, tasted beyond good.

So, golf with the guru on the shortest day of the year reinforced a lifelong lesson: A new set of sticks or the latest technology are great, but the most powerful weapon we have is right between the ears.