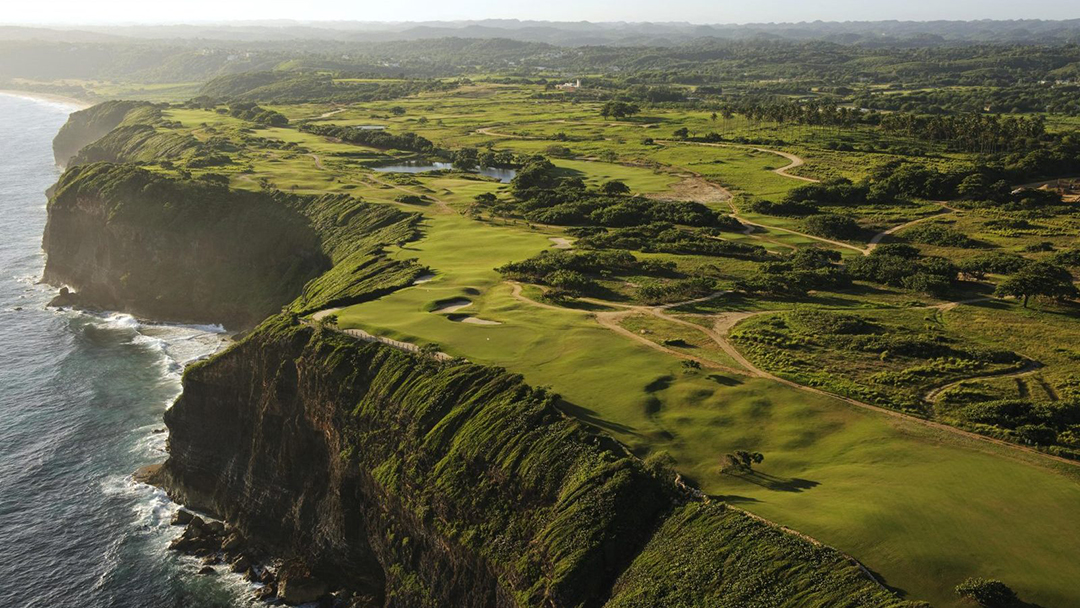 On the seven-minute drive from the clubhouse to the first tee of the memorable East Course at TPC Dorado Beach in Puerto Rico, you pass through a meticulously landscaped garden of tropical plants, by the $1,500-a-night AAA five diamond Ritz-Carlton Reserve (one of three in the world) and under the oddity of a 10-foot long two-inch-by-six-inch piece of lumber driven through the trunk of a palm tree like an arrow might be shot through an apple.

The board could easily be cut down, but it is left there as a reminder of the wrath of Mother Nature and just how ferocious she can be when she gets her dander up like she did two years ago, when Hurricane Maria ripped across the island packing 200 mph wind gusts capable of lodging a board in a tree trunk. There’s no telling from how far away Maria might have carried that piece of wood to its violent end, but what is clear is the distance Puerto Rico has come since Maria, and it is remarkable.

A lot of lives were disrupted, and many native Puerto Ricans were forced to move to the U.S. Life still isn’t completely back to normal in some of the small southeastern Puerto Rican towns where Maria came ashore. Even in the island’s economic center of San Juan there are still buildings boarded up and plenty of reminders of Maria’s destruction. But Puerto Rico today is a study in the resiliency of human nature.

“It’s a high five to humanity when you can get through something like that, something that is so far away from the norm and what you are used to,” says Eric Krahn, golf course superintendent at Wyndham Grand Rio Mar Golf & Beach resort.

Despite questionable support from the federal government, some sectors of Puerto Rico’s economy — the tourism industry for one — have bounced back better and stronger. Much of the tourism industry actually used the storm as a reset button, adding capital investment to insurance dollars and rebuilding bigger and better to make the island more attractive as a tropical getaway.

So for mainlanders, arriving in Puerto Rico is that exotic tropical island vacation, different enough to think you need a passport, but no customs clearance required. There is an easiness about traveling here. Many major East Coast markets offer direct flights, and when you get here, there is the familiarity of home but the distinct feeling of not being in Kansas anymore.

You can get a Budweiser, but you’ll probably want to try Medalla. You’ll hear natives call it the peso, but they are talking about the U.S. dollar, which is the official currency and spends everywhere without having to calculate an exchange rate. Your cell phone works here without an international plan. And Spanish may be more widely spoken, but English is the co-official language and spoken almost everywhere.

Following Maria, the island has rebuilt its identity, clearly with an eye on its heritage but thinking about its future. A new marketing strategy moves away from emphasis largely on beaches and the San Juan metropolitan area toward a broader focus on the island’s many tourist offerings, among them golf.

It is true, some courses didn’t reopen after Maria, leaving the island with 17. So if Puerto Rico were to become a state, it would rank dead last in number of golf courses (Alaska has 24) despite its golf-friendly tropical climate. In terms of quality, however, it would be hard to argue that Puerto Rico would not be near the top. Way upscale resorts like Dorado Beach, Coco Beach, Bahia Beach Resort (photo at left) and the Wyndham Grand Rio Mar Golf & Beach Resort near San Juan, and Royal Isabella on the west side of the island, measure up nicely with golf resorts around the world.

Most of the island’s resorts include private club components that are rapidly growing thanks to Act 22, a tax law designed to attract high net-worth residents by providing exemption from Puerto Rico income taxes on all interest and dividends.

“Immediately after the storm everyone was in shock and wondered what the future might bring. We knew Dorado would overcome this, but the big question was would the new growth leading up to the hurricane evaporate as people would be hesitant to move to Puerto Rico from the damage to the island.”

By early 2018 those worries evaporated, the program resumed and people continued to move to the island. At TPC Dorado Beach membership grew by 85 in 2018.

Two of the Dorado courses — the West and Pineapple — didn’t reopen after Maria, not entirely from the destruction of the storm. There is so much growth within the community that more room was needed for condominium construction.

Still, that leaves the resort along the Atlantic Ocean 30 miles west of San Juan with 36 holes, including the fabulous East Course, clearly one of the best in the Caribbean. From its ocean-side opening hole the Robert Trent Jones Sr. design recently upgraded by RTJ Jr. darts in and out from the turquoise water and includes a stretch of holes on the back nine that move up into some hills, offering a much different look.

About 30 miles on the other side of the historic city of San Juan (where among the blue cobblestone streets of Old San Juan you can eat at the Barrachina Restaurant, which claims to be the birthplace of the Piña Colada) the Coco Beach Golf Resort has been home to the Puerto Rico Open on the PGA Tour since 2008. The event wasn’t played in 2018 while the island cleaned up after Maria.

The PGA Tour event opposite the World Golf Championships event in Mexico is held on the resort’s Championship Course. A few holes play on a peninsula that juts out into the aqua blue ocean, but unlike many seaside courses, there are no truly memorable individual holes here where you might rinse a shot in the ocean. Instead the Tom Kite design relies on the sum of its 18 parts to add up to a wonderful tropical seaside experience. A second course at Coco Beach, The International, was also designed by Kite. It moves up into hillier terrain and through mangrove-lined swamps.

A little farther along the north coast of the island in Rio Grande, the Wyndham Rio Mar Golf and Beach Resort is the epitome of oceanside luxury. The beach is a quiet strip of sand where guests can relax with almost no one else in sight at times. The two courses are about as different as can be playing from the same clubhouse on a tropical island.

The Ocean Course teases and taunts with tropical breezes, salty air and the occasionally glimpse of the ridiculously blue ocean, but makes you wait until the 16th hole to play along side it. That turns out to be okay because from the elevated first tee that looks out to the ocean, the holes George and Tom Fazio built leading up to the 16th sit largely by themselves with no intrusion from condos or real estate. Just don’t expect your brief golf visit with the ocean to be pleasurable. Yes, an iguana encounter is possible, but it’s the 238 yards of a windy par 3 that is more likely to spoil your visit.

On the other side of the property, the River Course, designed by Greg Norman, snakes its narrow fairways and small greens through a tropical rainforest-like setting as it plays along the serene Mameyes River, at times offering eye candy views of the mountains of the El Yunque Rainforest.

A neighbor of Coco Beach, the St. Regis Bahia Beach Resort course plays through lush tropical foliage with thick canopies of maritime forest. Natural lagoons meander through the layout like a lazy river, and the omnipresent ocean breeze is as menacing as it is refreshing.

Palmas Athletic Club is a 36-hole complex in Humacao hard on the island’s East Coast. It is home to 18-hole creations from Rees Jones (Flamboyan) and Gary Player’s Palm Course. On the southern coast in Ponce lies the 27-hole Costa Caribe Golf and Country Club. Oceanfront holes, 14 lakes, mountain range views, and an island green ensure players are alternately entertained and engrossed.

On the west side of the 126-mile wide island, choices are fewer — the down-home pleasures of a place like Punta Borinquen Golf Club or the modern luxury of the Links at Royal Isabela, where golf is played on cliffs 200 feet above the ocean. It is there that brothers Charlie and Stanley Pasarell — Puerto Rican natives and former tennis champions, no less — said no thank you to big name designers and in the early 2010s routed the layout themselves on property Charlie’s investment group had purchased years earlier. After tackling their 7,538 yards, you’ll appreciate the pampering of Isabela’s modern luxury resort hotel.

Royal Isabela sits on what may be the most spectacular piece of golf real estate on the island, but it also bore the brunt of Maria, the eye of the storm traveling almost directly over the course as it left. Isabela, like the game itself, persevered. There are stories about the great lengths people went to restore golf on the island — like the one Rio Mar’s Krahn tells about wading through waste-deep water in the days following Maria trying to unclog drains on the River Course. Or the one Dorado Beach’s Willenberg likes to show you in person of the board blown through the trunk of the palm tree.

Maria is just two years in Puerto Rico’s rearview mirror, but judging by the quality of the island’s restored golf economy, she is a distant memory.