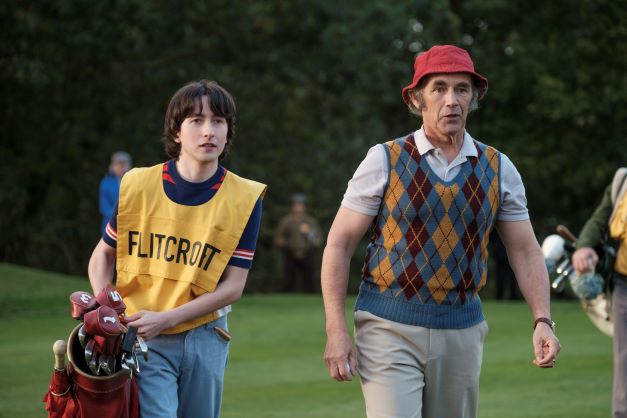 “Caddyshack” is an iconic golf movie for slapstick and gag fans.  “Happy Gilmore” finds Adam Sandler turning a hockey stick into a driver and fairway wood.  “Tin Cup” boasts the star power of Kevin Costner and Rene Russo.  Then there are more recent golf films that fell so short that I was left scarred from ever watching another golf movie again.

Recently, I was invited to a special, advance screening of “The Phantom of the Open” the week of the PGA Tour’s Honda Classic in South Florida.  It tucked nicely within my schedule, so giving the golf movie a try made sense.  Man, I’m glad I did.  If only my wife, a staunch non-golfer, was by my side, she’d enjoy it, smiling, laughing and crying just as much if not more.

“Phantom” is much more than a golf movie.  It’s a decidedly fun watch that’s heartwarming aglow and based on a true story.  And it stars Mark Rylance, a 2015 Oscar winner for Steven Spielberg’s “Bridge of Spies.”

I categorize “Phantom” as a sports comedy because you don’t have to tee it up regularly, if ever, to love it.  The film doesn’t open in theaters nationwide until early June, but word is that it’s sleeper material for Academy Award consideration.  While we’re at it, I have seen enough flicks to roll the dice in Vegas that Rylance’s “Phantom” performance could very well earn him a best actor nomination.  Many in the audience felt similarly.

As Maurice Flitcroft, Rylance brilliantly portrays a reed-thin, unkempt, 46-year-old shipyard worker in a far-flung England town.  He gets shoved aside from that job and – with utmost seriousness, zero sheepishness, unrecognized naivete and a relatively non-emotive personality – tells his blue-collar buds that he plans to play in the Open Championship (affectionately, the British Open).  That knee-jerk comes about after merely seeing Tom Watson win the 1975 major on a fuzzy living room TV.

Problem is that Maurice never picked up a golf club.  And his disheveled looks and rather gnarly attire hardly fit the pompous Royal & Ancient, owner and producer of the Open Championship.

At this point, I remind you that “Phantom” is firmly based on a true story.

Repeatedly, “practice is the road to perfection,” says Maurice, a novice ball banger with no formal instruction but persistence to be the best version of himself.  And, lo and behold, after an R&A application snafu, our dreamer of all dreamers finds himself entered into a 1976 Open Championship qualifier.

Maurice hardly belongs in the same conversation, let alone field. as the elite country club set who were silver-spooned from the proverbial womb by stage moms and dads hiring master coaches to turn them into golf champions.  And Maurice is the antithesis of Seve Ballesteros who he engages in one-on-one locker room banter that’s as genuinely endearing as it is memorable.

One would think that shooting a 121 would bring shame.  Not so much.  The softspoken, eternal optimist Maurice stood proud.  He was the best version of himself.  Media made the most out the highest score in Open Championship qualifying history, earning abundant headlines across oceans.  So much so, our unwitting star was flown to the hyperbolic golf Mecca of Grand Rapids, Michigan, where he was honored for his attempts at what became Blythefield Country Club’s annual “Maurice Flitcroft World’s Worst Golfer Tournament.”

True, Maurice didn’t even make it to the big game.  He didn’t even touch 1976 Open Championship winner Johnny Miller.  But don’t debate, ever, that if you put your mind to pursuing a goal, no matter how lofty or low bar, anything is achievable and prideworthy in its own, unique way.