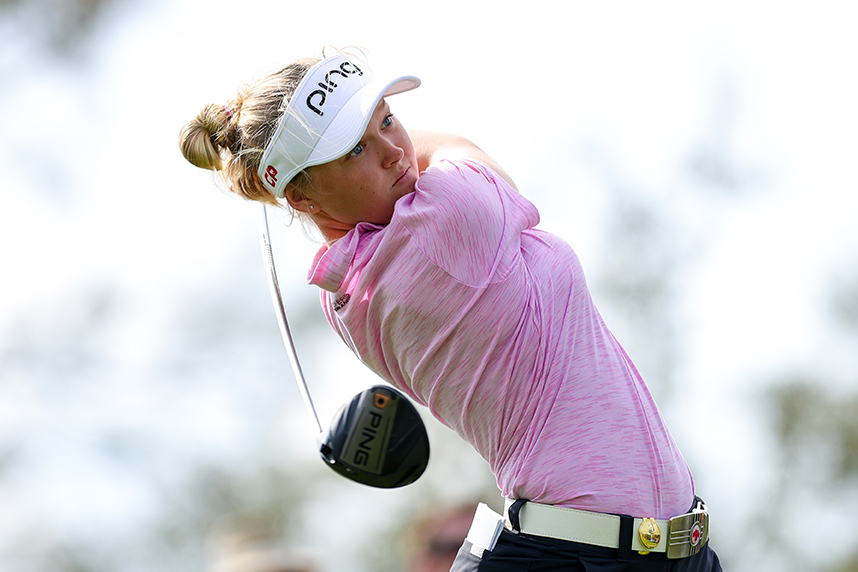 The world’s best female players, a slew of golf-loving celebrities and lots of central Florida sun: That’s the party time prescription Jan. 17-20 for the first-ever Diamond Resorts LPGA Tournament of Champions Presented by Insurance Office of America, which turns Tranquilo Golf Club at Four Seasons Golf and Sports Club Orlando into a unique, made-in-media-heaven matchup that simply has no peer in modern professional or amateur golf.

While LPGA sanctioned event champions from 2017 and 2018 — up to 36 players in all including superstars Michelle Wie, Lexi Thompson, Stacy Lewis, Lydia Ko and Brooke Henderson (pictured above) — engage in serious stroke play competition for a $1.2 million purse over four days in the Florida sun, big names from the worlds of professional sports and entertainment — from baseball greats like Roger Clemens and Justin Verlander to comedian Larry the Cable Guy to NFL legends Marcus Allen and Jerry Rice — get a shot at their own $500,000 purse in a Modified Stableford format. And it all happens simultaneously, one LPGA star battling alongside two celebs on the links by day, attending parties and concerts together by night, with the Golf Channel and NBC bringing the on-course action live to millions of fans in 135 countries.

This year’s event, the first in a three-year deal among Diamond Resorts, the LPGA and NBC,  kicks off the ladies’ tour season with a bang and promises to be a winner for all involved, especially fans who will revel in the best of both worlds: the game played at its highest level and their favorite celebs getting out there and knocking it around, just like they do on the weekends. The Golf Channel will televise the event live on Thursday and Friday and host an hour-long lead-in for both weekend rounds before NBC takes over for two hours of live competition.

The Tournament of Champions is the outgrowth of a celebrity-only fundraiser that Diamond Resorts CEO Mike Flaskey started in Orlando four years ago with players from Major League Baseball. NBC, which owns the American Century Celebrity Championship — now nearing its 30th edition as a marquee summer event at Lake Tahoe — noticed the strength of Flaskey’s field and asked him if he wanted to televise it as the ACC’s winter counterpart. They introduced him to their tournament director, Mike Milthorpe. “We signed a three-year deal with Golf Channel, and our year one ratings exceeded everything on the LPGA and PGA Champions Tour that year,” Flaskey says. “We had something; we saw what moves the needle, what people want to see, and that’s celebrity golf.”

Flaskey ended up inking a two-year deal with the Champions Tour to do a non-sanctioned early season event — 35 players, each paired with two celebs, basically two tournaments in one — which again drew big ratings. It became the blueprint for the LPGA’s first-ever Tournament of Champions this year; four LPGA players took part and loved the experience.

“We knew we had something special and wanted to explore all the available options,” Flaskey says.

Along came LPGA Commissioner Mike Whan, who had expressed earlier interest in the event. Since taking over the help in 2010, Whan had grown the LPGA brand immensely around the world and was looking for new formats and fresh ways to put his players in front of millions of new fans. Flaskey wanted to build on his limited field concept, bringing the LPGA’s “best of the best” instead of a full field event. Whan agreed, telling Flaskey that his tournament “checked all the boxes.”

“I wanted to create something that’s fun not only for the fans, but for us, too. Diamond Resorts asked me, ‘Do you have a party on tour, Mike? You know, a place where you celebrate your winners, play great golf all day, but also have fun every night?’ I thought, you know, we have some great gala parties and parting parties, but nothing like that. So they said, ‘We want to be your week-long party on tour, the thing that people try to qualify for.’ Living in Orlando, I’ve seen their event, so it wasn’t out of the question for me. They also said, ‘We want to take it to the next level, partner with your players, put in on network TV.’

Whan adds that the handful of LPGA players who had teed it up in the event and were, in Flaskey’s words, “blown away” by Diamond Resorts’ hospitality, the entertainment, the food — all provided free of charge — lobbied him hard to get involved. “They came to me and said, ‘You’ve got to meet with these guys at Diamond Resorts — they’re building something really fun.’”

The feeling was mutual. Flaskey told Whan that he and his athletes loved the LPGA players’ personalities, how they clicked with the celebrities and athletes. Whan knew then that this was a powerful partnership. “My players will have fun, and those celebrities with their own strong followings will see just how good the best female golfers in the world really are. We’re the perfect tour to welcome the fun side of this, the comradery, the teamwork. As each group walks by, you’ll get a little bit of everything. Every player, every group will find its own mojo. Some will be giving verbal jabs back and forth.”

In other words, it’ll be a blast for everyone involved.

“I think it will quickly become the best party on tour. It’s going to be a lot of fun, not only on the course during the day but at night.”

Flaskey agrees that given Diamond Resorts’ reputation for staging over 3,000 top-notch parties and concerts at its venues worldwide each year, the Tournament of Champions’ evening events will be the best on either the LPGA or celeb golf circuits. “You may remember an event that used to be played at Lake Nona called the Tavistock Cup,” he says. “I watched it closely, the entertainment and parties, the level of hospitality, and envisioned that as part of this tournament. Music is a big part of what we do and we’ve integrated it as big part of this week.”

It all adds up to a week to remember, revel in and root for, thanks to Diamond Resort’s proven events expertise … and the LPGA’s passion for making its tour the best it can be.

“One thing I love about our partnership with the LPGA and Mike Whan is they’re open-minded and creative,” Flaskey says. “They sit back, listen and say, ‘That’s a really good idea — what if we do this?’ And the next thing you know, you’re collaborating.

For information or tickets, visit www.diamondlpga.com