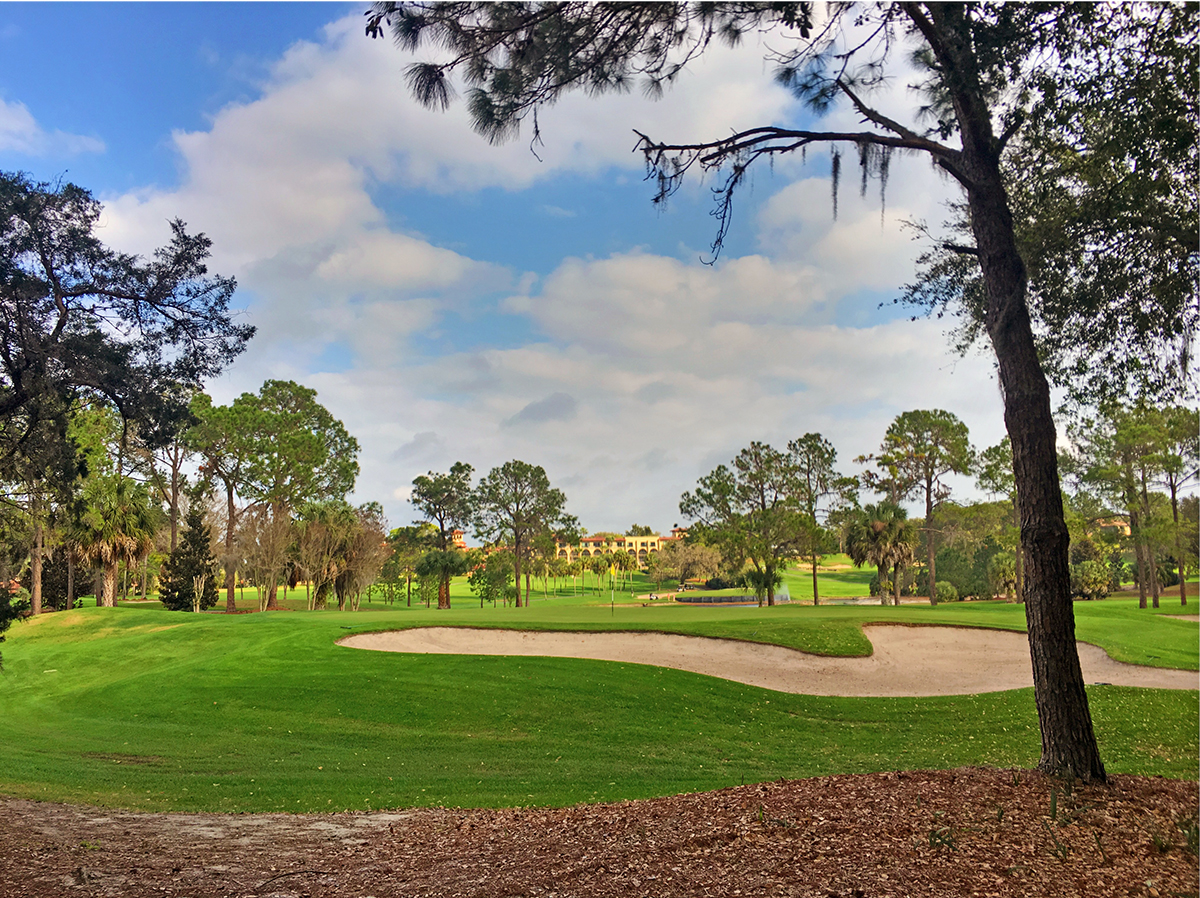 Central Florida’s historic Mission Inn Resort & Club is many things to many people, including golfers who venture south for subtropical warmth and green grass in the depths of winter.

Even a freak late January downpour and tornado warning, which caught a Golf Tips writer by surprise a couple days before the PGA Merchandise Show in Orlando, can’t blow or wash away the Mission Inn’s classic charm. There are worse things than enjoying a light dinner and cocktail in the hotel’s intimate La Margarita Lounge as the thunder roars and lightning turns night into day, especially when there’s a sweet pre-storm round on the 100-year-old, recently rejuvenated El Campeón to relive and a comfortable post-storm night’s sleep on the way.

A half hour’s drive northwest of downtown Orlando via the Florida Turnpike,  State Road 19 and County Road 48 in the quaintly (and aptly) named burg of Howey-In-The Hills, Mission Inn is far enough removed from the urban hustle and amusement park crush to make a guest feel that he’s turned back the clock several decades, to a time when this part of the Sunshine State was a lot sleepier and the days were more stretched out, languid, relaxed. In fact, it’s a great “throwback” home base for any Central Florida golf trip, whether you’re ranging over to the Gulf Coast or into Orlando and beyond to get your multi-round fix. And with Bay Hill just a quick drive south, staying there while attending the PGA Tour’s annual Invitational is a great idea.

Not that the resort and its amenities haven’t kept up with modern demands. There’s the full-service Spa Mirabella, tennis and volleyball courts, a trap and skeet range, fishing and boating on nearby Lake Harris, hiking the “Trails of the Conquistadors” and dining at four restaurants, from straightforward golf course fair at Nicker’s in the clubhouse to the region’s most popular Sunday brunch in La Hacienda (which overlooks El Campeón’s signature 17 hole, a double-dogleg par 5  to a tucked-over-water green that will stick in your mind like few other Florida holes) to rarefied classic steak house fare in El Conquistador.

What makes a round at Mission Inn so unique for this part of America is the terrain, among the hilliest in the state. There’s 85 feet of elevation change on El Campeón, much of it on side-by-side par 4s, Nos. 4 and 13. Both ask for a big drive over water and between tall pines or staggered bunkers, leaving steeply uphill mid-iron approaches to small greens. Not exactly the type of shot you’d expect in these parts — nor are the tasty downhill drives at holes 6, 7 and 14, up over the trees and at the whims of the swirling winds. No doubt that that back in 1917, Chicago-based original architect George O’Neil relished having this kind of canvas on which to paint what was then called The Floridian, one of Florida’s first fulled grassed course and now one of its most consistently high-ranked layouts (Scotsman Charles Clarke was hired in 1926 to make some Jazz Age enhancements). Water shows up on 13 holes, most dramatically at No. 16, a short par 4 with an island green also surrounded by sand, and on the final hole, a risk-reward cape-style hole with water up the entire right side. El Campeón gets under the skin from the get-go, revealing one visual and strategic surprise after another. It’s more than challenging enough to host the game’s best but balanced and inviting enough for everyone else.

A second course, Las Colinas, was laid out by PGA Tour player and NBC announcer Gary Koch in 1992, with a redo by Florida favorite Ron Garl in 2007 — giving Mission Inn one of the region’s best one-two resort golf punches. And it doesn’t hurt that the resort’s instruction team includes top-level teaching pros like Gary Gilchrist, who works with several current PGA and LPGA Tour stars.

So, if the Mission Inn’s rich history, impressive amenities and fine golf don’t seal the deal for you, one more fact will: Its value. Golf packages start at around $150, with unlimited play options starting at $223. And that’s in high season, with or without the thunder and lightning.