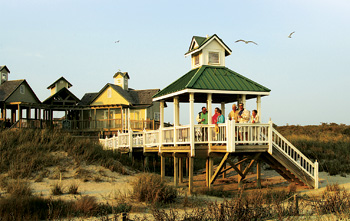 St. James’ legacy lives on in many forms. Numerous churches, hospitals and even a Broadway theater have been named after the patron saint of equestrians (among other things). There aren’t any horses at St. James Plantation in Southport, N.C., but there’s plenty of wide-open space, a nature trail and Waterway Park contained within the private community’s 5,000 acres.

Still, it’s the golf that’s truly heavenly at St. James Plantation, particularly the new Reserve Course, from Nicklaus Design, that opened late last summer. It’s a gem and distances itself from the community’s three other courses.

Designed by Michael Nicklaus (Jack’s youngest son), the Reserve constantly surprises and never disappoints, especially for experienced golfers who will appreciate his attention to detail.

By the way, St. James is also the patron saint of knights, and while the Reserve course upstages the Plantation’s other offerings, it does so gallantly. Although it’s superior to the other tracks, all four are unified by the area’s low-country topography and offer something for every golfer, regardless of skill level._Ê

The Living
Living at St. James doesn’t just include convenience to its four golf courses and a state-of-the-art deep-water marina on the Intracoastal Waterway. There’s also a fitness center replete with an outdoor Olympic-sized pool, classes in Tai Chi, Pilates and yoga, clay and hard-surfaced tennis courts, walking and biking trails, and more than 25 community-based social clubs and organizations.

Who calls St. James home? Residents from all over. Forty states and a dozen countries are represented at St. James. Most people are retired, although it’s not uncommon to see families with children putting down roots here, too.

The Golf
St. James is home to four courses, including the year-old Reserve Course, built by Nicklaus Design and ranked by the North Carolina Golf Panel as the Best New Golf Course in the state. That’s no surprise, as shot values are high, strategy comes into play on seemingly every shot and numerous risk/reward design elements challenge golfers to weigh the consequences of their decisions.

Southport
Southport has been ranked one of the “Best Places to Retire” by Rand McNally, and despite the occasional autumn hurricane threat and hot summer months, it’s not hard to see why this “Norman Rockwell fishing village” attracts folks who want to spend the latter part of their lives here.

Located 25 miles north of the South Carolina border on the Intracoastal Waterway (roughly halfway between Myrtle Beach, S.C., and Wilmington, N.C.), Southport is modest in size (2,600 full-time residents) but close to major coastal centers and the amenities they boast. It’s also a safe place, meriting one of the lowest crime rates in the Carolinas.

If the downtown resembles a movie set, that’s because a number of major motion pictures (Crimes of the Heart and Summer Catch, to name a few) have been filmed in town.