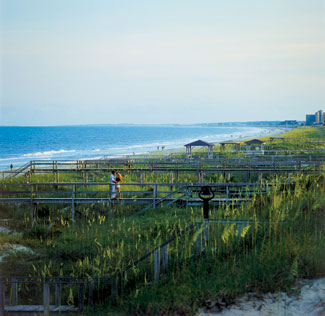 100+ Golf Courses. The common misperception is that all 100+ courses along the Grand Strand are right on top of each other. Not the case. (It’s not named the Grand Strand for nothing.) From the southern chunk of North Carolina to Georgetown County 20 miles south of Myrtle Beach, the Grand Strand (or as numerologists call it, Hwy. 17) stretches over 60 miles with golf courses that range from the sublime high-end daily fees to cheap munis. It seems there’s literally every type (and price range) available for all kinds of budgets and skill levels. Penny-pinchers will gravitate to courses like Azalea Sands and Diamond Back, while those looking to tackle best-conditioned tracks, such as Barefoot Resort and The Dunes, will pay considerably more. One constant remains: to find the best deals, buy a package. www.mbn.com

Waccamaw Golf Trail. The 12 courses that make up the Waccamaw Golf Trail wind their way through old rice plantations, massive moss-draped oak trees and the black waters of the Waccamaw River. One of the highlights is the 18th hole at Caledonia, Mike Strantz’s low-country gem. The second shot requires a short mid-iron over some serious agua to a green guarded by numerous sand traps. If that doesn’t put a lump in your throat, the dozen or so onlookers relaxing on the nearby clubhouse porch will. Chances are, they’re wagering whether your ball gets wet, sandy or lands on the green stuff._Ê www.waccamawtrail.com/gt

World Amateur Golf Championship. In 2006, more than 3,000 participants from every state and 21 countries flocked to Myrtle Beach for the 23rd annual World Amateur Golf Championship, a four-round, good-natured net golf tournament. Competitors play four rounds of golf (on four different golf courses) and gain admission to the PGA Tour Superstore at the Sheraton Myrtle Beach, site of the world’s largest 19th hole. Hey, where else can you mingle with 3,000 other people who love the game as much as you do? www.worldamgolf.com 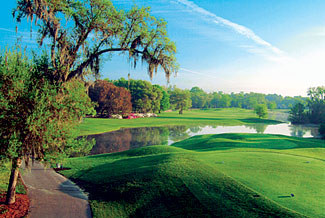 Glory Days Alumni Golf Classic. Can’t get enough of your buddies from college? 2007 marks the inaugural year of this four-man, 54-hole Ryder Cup-esque event, which pits alma maters against each other. More than just a chance to relive your glory days, there are some serious bragging rights to be won, plus you can tailgate, down a couple cold ones and win some cool prizes. May 16-20, 2007. www.glorydaysgolf.com

Golfapalooza/Monday After The Masters. Think Masters and you immediately picture Augusta National, azaleas and Amen Corner, but for a lot of people without passes to that hallowed tournament (and for some who do have passes—John Daly made a cameo last year), there’s Golfapalooza, a blowout event that broadcasts the tournament on a jumbotron and features a massive golf equipment demo and competitions. Come Monday, Hootie and the Blowfish host the Monday after the Masters Pro-Am Charity Tournament. No jacket required. www.golfholiday.com/golfapalooza.cfm

Broadway At The Beach. In recent years, most of the nightlife in Myrtle Beach has gravitated to this city walk. Bars, restaurants, stores, cinemas, the Palace Theatre and a wave park for the kids dot the landscape that crisscrosses waterways stocked with ravenous koi. Even KISS, the heavily made-up heavy metal quartet, has its own coffee house. www.broadwayatthebeach.com

Barefoot Landing. Located along the Intracoastal Waterway, this shopping complex brings to mind an old fishing village. Hey, can you name another mall with a 27-acre lake in the middle of it? Tired of polite waiters? Go to Dick’s Last Resort, a cheeky joint where they treat you like a_â”well, rudely. Greg Norman’s Australian Grille doesn’t serve shark, but they do make a mean slow-roasted prime rib. Sink your teeth into the 18-ounce “Shark Cut.” Barefoot is also home to Myrtle Beach’s House of Blues, home of Golfapalooza and Hootie and the Blowfish’s Monday after the Masters Jam. www.bflanding.com

Coastal Federal Field. Longing for the days when athletes played for the love of the game? You know, presteroid/premultimillion dollar contracts? Check out the Myrtle Beach Pelicans, the Advanced Class-A Affiliate of the Atlanta Braves. What’s more, they play in an intimate (6,000 capacity) ballpark that was rated the number-two ballpark in the country at the Class-A level. If the seats look familiar, it’s because they’re from the old Fulton County Stadium. www.myrtlebeachpelicans.com 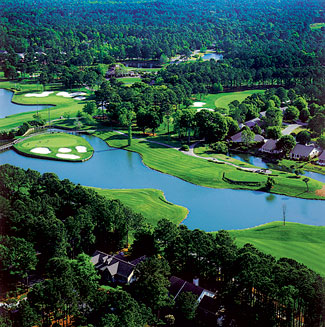 Affordable Seaside Lodging. And we mean really affordable. It isn’t every day that you can plop down $39 for one night at a beachfront motel, but in Myrtle Beach, it’s practically the norm, particularly in the low-season months. Granted, the accommodations might not always be The Ritz, but for budget lovers who dig waking up to the sounds of the surf, there’s no better deal anywhere.

T-Shirts. Myrtle Beach might have the largest T-shirt stores in the country. Up and down the Grand Strand, superstore-sized T-shirt stores rise from the ground like fluorescent-lit airport hangars. There’s literally one (sometimes two) of these behemoths on every block. They aren’t just packed with cotton crewnecks; you can also find beach towels, hats, sunglasses and every other imaginable beach item priced to sell.

When To Go
Year-round accommodations are available. (Late summer through spring is the prime time with premium rates. Low rates are available in winter and early summer.)

1. Litchfield Beach & Golf Resort
Located in the Litchfield Beach and Pawleys Island section of the Grand Strand. Perfect when playing the Waccamaw Trail. It’s a great place for an iced tea too.

2. Patricia Grand
With an indoor “lazy river” and proximity to B’way at the Beach, it’s great for families. Plus, all the rooms were recently renovated, so bring your swim trunks and float away.

4. Long Bay Oceanfront Resort
There are 286 oceanfront condos, suites and rooms, plus a “Silly Submarine Kiddie Pool.” The course, however, is a stiff test for anyone.

5. Myrtlewood Villas
One-, two- or three-bedroom villas adjacent to the Myrtlewood Golf Club. One mile to Broadway at the Beach, where it seems everyone likes to go on the weekends.

1. Wicked Stick Golf Links
Its name might give you the wrong impression, but this John Daly and Clyde Johnston design is relatively flat and only slightly waterlogged, making it the perfect chance to knock some strokes off your index. Plus, you can’t beat the price. Some rounds ring up as low as $48.
www.wickedstick.com

2. King’s North
Now in its 10th year, this Arnold Palmer redesign of the Myrtle Beach National North Course is forgiving and challenging—even if the 18th hole features 40 bunkers. Hit it straight on 12, it’s an island green.
www.mbn.com

3. Lockwood Folly CC
This semi-private William Byrd design lies at the northern end of the Grand Strand in Shallotte, N.C. It winds through groves of hardwood trees and features views of the tidal estuary. It’s tight and tree-lined, but that doesn’t mean low numbers can’t be posted.
www.lockwoodfolly.com

5. Possum Trot Golf Club
Opened in 1968, this Russell Breeden design remains one of the best values on the Grand Strand. It’s also short and forgiving and a favorite among women. The red tees max out at just over 5,100 yards and the whites stop short of 6,400 yards. Still, it’s the greens fees that we love. $30-$69 for a round.
www.possumtrot.com