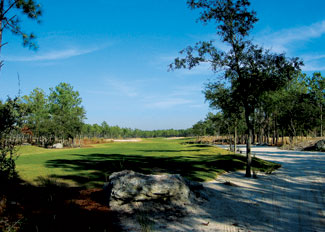 A number of destinations around the world feature golf as the main attraction, and the Brunswick Isles, an area straddling the border of North and South Carolina, is definitely one of them. There are 16 golf courses from Calabash up north to North Myrtle Beach down south. Along the way, golfers can tee it up on courses designed by Arnold Palmer, Rees Jones and Myrtle Beach regular, Dan Maples, to name a few, and find themselves negotiating marshland, rivers and creeks, as many courses take advantage of the area’s natural hazards.

Of course, the best way to enjoy your time in the Brunswick Isles isn’t just to drop in for a day or two. In fact, I recommend spending four days there. That way, you can tee it up a minimum of six times, mix up your foursome (for your favorite betting games) and take advantage of the area’s other fine attractions, including the beach and numerous fine restaurants.

Day 1: Rivers Edge
After you arrive at Myrtle Beach International Airport (serviced by six major airlines), immediately head north to Rivers Edge Golf Club in Shallotte, N.C. (I suggest taking the new Interstate 31, as it reduces the travel time considerably. In this case, it’s a breezy half an hour.)

Rivers Edge is a great test of golf and a perfect way to start your four-day Brunswick Isles vacation. Designed by Arnold Palmer and routed around the Shallotte River, Rivers Edge is consistently ranked among the top courses in Myrtle Beach. It’s also a toughie, so you probably don’t want to play from the tips (unless your first name is Tiger and your last name is Woods, in which case, invite me along!). The land is perfect for golf, which may explain why no dirt was moved to “make” a golf course.

After your round, head back toward Sea Trail Resort (your home away from home for the next three nights), but before you get there, stop in Calabash for some dinner. The Dockside Seafood House serves up many different kinds of seafood. 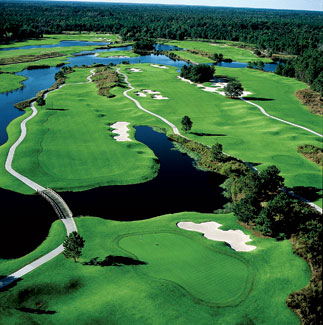 Day 2: Thistle Golf Club & Pearl Golf Links
Today and tomorrow are all about the golf, so conserve your energy and make sure everyone in your group agrees on all bets before you play.

After a quick drive from Sea Trail, you’re ready to put all that long-drive technology to use at the Thistle Golf Club, a 27-hole layout just north of the South Carolina border. Designed by Tim Cate, the Thistle takes its name from an ancient Scottish golf society and incorporates many links elements into its routing, including heather, wind-swept fairways and large, bentgrass greens.

Because time is of the essence, head to your next destination to not only play, but also grab a bite to eat. The Pearl Golf Links were built on a 900-acre marsh preserve in Sunset Beach and Ocean Isle Beach, N.C. The East Course, where you’ll play today, is a traditional layout that was renovated in 1999. Carved through the forest, it boasts a fantastic finish, as the Calabash River borders much of the challenging par-5 18th.

After a day on the links, you’re going to need something substantial for dinner. Lucky for you, it’s right around the corner at The Boundary House, a new steakhouse in Calabash. 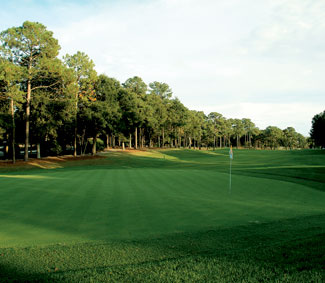 With an average temperature of 74 degrees, Sunset Beach boasts some of the country’s best year-round weather, making it a perfect place to spend your Brunswick Isles vacation.

The Sea Trail Resort is less than 45 miles from both Myrtle Beach and Wilmington International Airports_Ê and features such amenities as in-room massage, beach access and three championship golf courses.

Day 3: Sea Trail Resort & Leopard’s Chase
Sleep in a little later today because you’re playing at Sea Trail’s Maples Course, designed by Dan Maples. It’s one of the prolific designer’s best creations, primarily because of its challenging layout and inventive routing_â–most notably when five of its holes wind their way through Calabash Creek, taking you past nesting Osprey and other wildlife. 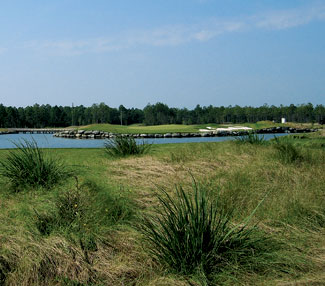 Since your third day again finds you playing 36, you won’t have much time for lunch, so either grab a bite at Sea Trail or at the Ocean Ridge clubhouse, where you’ll play your next 18.

Ocean Ridge is the home to the “Big Cats,” five courses named after the fiercest felines in the world, and today, lucky you, you’ll be one of the first to battle Leopard’s Chase. Tim Cate’s course opened its doors on February 28th and is already receiving raves from those who’ve played it.

After tackling maples and leopards, why not have dinner with the Shark? Greg Norman’s Australian Grille at Barefoot Landing is minutes away. 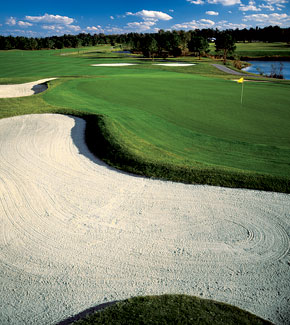 Day 4: Meadowlands Golf Club
All good things must”well, you know how it goes. If you flew to Myrtle Beach from the Eastern Seaboard or Midwest, you’ve probably scheduled your departing flight for late afternoon (a wise move in my opinion) because that gives you time to play at least 18 more holes of golf–this time, at Meadowlands Golf Club in Calabash, N.C.

Even though it’s a beast from the tips (measuring 7,400 yards, to be exact), Meadowlands has earned the reputation as a fair test of golf, even cracking the Top 100 list of “Women-Friendly Courses.” Still, that honor doesn’t mean it’s a pushover (for either sex).

The Willard Byrd design is carved around wetlands, freshwater lakes and hardwood trees. Its signature hole, the 432-yard, par-4, 6th hole, features an elevated fairway (bordered by a pond on the left) and a hidden water hazard protecting the green. If that isn’t enough to make you practice your iron play on the range, being distracted by the course’s natural beauty will be.

As you head to the airport to catch your flight, I suggest you start to plan your next trip to the Brunswick Isles. There are 10 more courses to play, and each one of them is unique, challenging and ultimately, a fair test of golf. That alone makes this area worth visiting time and time again.