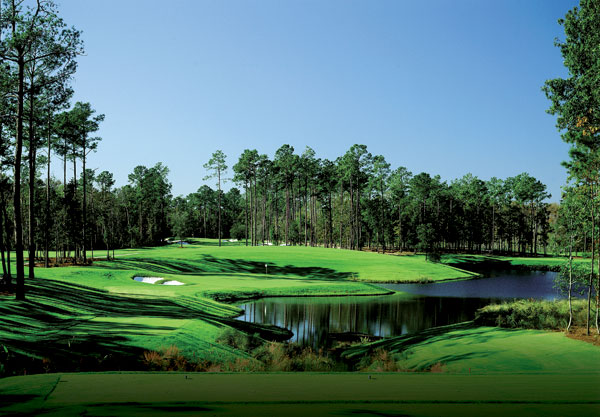 Of course, bargains aren’t Myrtle Beach’s only attraction. First and foremost is the high-quality (and high-quantity) golf. Myrtle Beach has about 100 courses on its Grand Strand, and many of them rank among the country’s best. Another draw is the area’s pleasant spring weather. The average high temperatures along the South Carolina coast hover in the high 70s and low 80s in May—just the thing that’ll keep your muscles and golf swing loose.

There’s also a lot going on this spring, including the recent grand opening of the Myrtle Beach Golf Hall of Fame at the newly renovated Pine Lakes Country Club. After a 20-month, $16 million makeover, Pine Lakes also boasts a spruced-up clubhouse and golf course reminiscent of Scottish links.

But perhaps the most attractive thing about Myrtle Beach remains its location, halfway down the eastern seaboard, a short flight from just about anywhere east of the Continental Divide. Plus, many discounted specials are available, and a trip to the area might be the perfect cure for your recession blues.

After you stroll through the garden, tee it up on the recently renovated Pine Lakes Course. The Grand Strand’s first golf course opened its doors in 1927 and recently underwent a 20-month, $16 million restoration project headed by Myrtle Beach-based architect Craig Schreiner. After its makeover, Pine Lakes has returned to its early 20th century Scottish roots. One nine has been restored; another nine is brand-new.

Day 2
On day two, head south about 25 miles away from central Myrtle Beach, and play two courses on the Waccamaw Golf Trail.

The 12-course trail surrounds the charming beachside towns of Pawleys Island and Litchfield Beach and features some of the Grand Strand’s best golf courses, including Caledonia, Pawleys Plantation and Willbrook.

This being the heart of the so-called “low country,” many courses were built on former rice and indigo plantations and are routed along the Waccamaw River’s black waters. While it’s not easy to choose which courses to play, we suggest you consider playing layouts designed by different architects. Jack Nicklaus (Pawleys Plantation), Gary Player (Blackmoor), Tom Fazio (TPC Myrtle) and the late Mike Strantz (Caledonia and True Blue) all have left their mark on this southern trail, and each course reflects its designer’s architectural trademarks. Fortunately, all the Waccamaw Trail courses are within a (very) short drive of each other, so mixing and matching is a breeze.

Day 3
On day three, you have a couple options: Either tee it up at another Waccamaw Golf Trail course or head back up north to the 36-hole, Myrtlewood Golf Club, a Myrtle Beach favorite for over 40 years. Myrtlewood boasts two designs, Palmetto and PineHills, and both incorporate lots of water in their designs, including the Intracoastal Waterway. PineHills, formerly known as The Pines, is the only Arthur Hills course in Myrtle Beach, while Edmund B. Ault designed the Palmetto Course. Both courses have player-friendly layouts and offer a great chance to card a low score before your vacation ends.