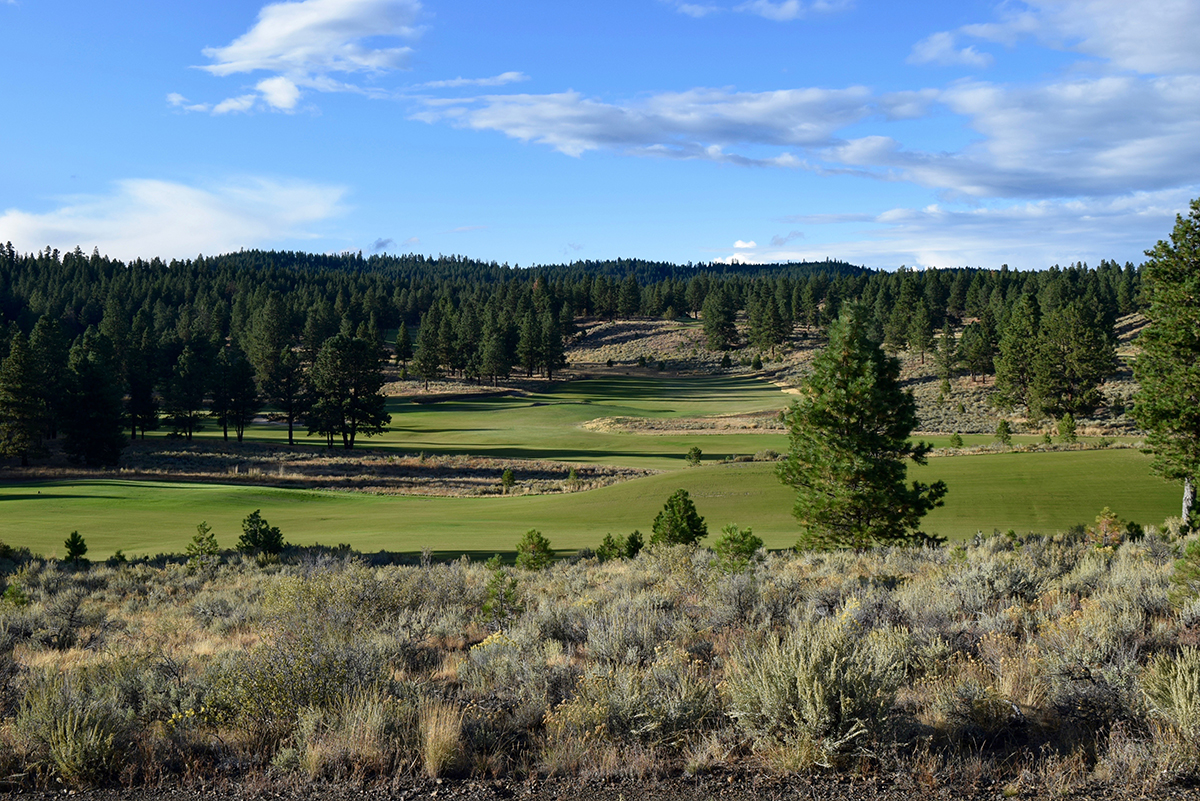 The great state of Oregon jumped on the big-time international golf travel map nearly 20 years ago (hello, Bandon Dunes), and for decades before that had a foothold on the regional travel scene (hello, Bend), but when the Retreat and Links at Silvies Valley Ranch opened this summer, the map grew in a big, beautiful and brash way.

Sprouting on several hundred acres of dramatic high desert terrain at the northern end of a 140,000-acre working cattle ranch, a nearly six-hour drive from Portland and three hours from Boise, Idaho, Silvies isn’t easy to get to. That’s part of its against-the-grain essence and rough-edged charm. Golfers will rack up mega-miles to discover the next great course, and Eugene-born architect Dan Hixson’s reversible 36 holes definitely qualify as great, or on their way to great once they’ve had a bit more time to mature.

Hixson and ranch owner Scott Campbell — a retired veterinarian from nearby Burns, Oregon, who bought the property with his wife, Sandy, in 2007 — walked the site several times before starting construction in 2010. A no-nonsense, detail-oriented guy who at one point considered skipping a course altogether or just doing nine holes, Campbell made Hixson an out-of-the-norm offer: Instead of paying him a design fee, he’d put him on payroll and give him 10 percent of the course’s revenue. Now Hixson is pretty much part of the family, and with the resort’s opening, the rest of the traveling golfer community is invited to the table, too.

As with the Old Course at St. Andrews or The Loop, Tom Doak’s new design at Forest Dunes in Michigan, Hixson fashioned a full 36 holes on one 600-acre hunk of land (about 120 acres are turf), with each 18, the Hankins and Craddock, named after 19th century Silvies Valley homesteaders. The Hankins moves counterclockwise over the rolling mix of sage prairie, grassy meadows and pine-fir forest; the Craddock goes clockwise. Alternating daily for play, they share 27 greens and 16 fairways, with several other putting surfaces and a couple fairways unique to each course to make the best use of the site. Some would contend that makes it something other than truly “reversible,” but Hixson did the right thing, and the results are surprising, engrossing, spectacular and flat-out fun.

“Scott jokes that Dan built more than 36 holes, but along the way picked his favorites,” says Lee Harlow, who came on board as Director of Golf Operations just before the resort opened for preview stay-and-play business in July 2017. “Dan had a blank canvas; with all that land he was able to choose what he thought were the best golf holes. It takes a bit to get used to, but once you’ve played them a couple times you get a feel for them. Most designers need to worry about building around lots and real estate, but Dan had the run of the place.”

Somehow Hixson — who also designed Bandon Crossings a few miles south of the famed golf resort, and Wine Valley in Walla Walla, Washington — devised two tracks that stand alone, with their own character. It’s a thrill to come upon a hole, stand on one of the many elevated tees (from which the views are vast, encompassing not only the task at hand, but eons of geologic movement and restless human history), and realize you’ve covered that same ground from a different direction, without a hint of sameness. Greens and bunkers are shaped to attract or repel or swallow a shot on their own terms, from alternate angles. Fairways are wide, as they need to be to accommodate shared holes — but traps, creeks, wetlands, desert outcroppings and stands of trees sneak into sight and shot lines at just the right places. This is design sleight-of-hand of the most seductive kind and there needs to be more of it, for golf’s sake and the planet’s too (less turf means less water use).

If fairways are football field broad, greens are St. Andrews huge. As on the Scottish coast, winds tend to kick up in these parts, so average size is well over 10,000 square feet — though you need to cut them in half when planning your approach, except on the few stand-alone holes: Holes 7 and 13-15 on the Hankins (on balance the easier of the two courses, according to most players) and Holes 10-12 on the Craddock (No. 18 Craddock also has its own green). Hixson went the hug-the-topography route when building his putting surfaces, asking the golfer to negotiate steep banks and cliffhanging reads from just a few feet from the cup. Nothing is a gimme, and if you’re on the wrong side of a shared surface you could be looking at a 100-footer or more. That’s part of the fun and a more than acceptable source of frustration. On what amounts to high-altitude links golf, creativity is key and playing the ball on the ground is a definite option, especially from 50 yards and in. Enjoy the challenge wrapped in serenity — no nearby structures or power lines, with the whispering trees and nibbling deer and stunning natural beauty your only distractions. Pick the right approach and pray for a two-putt average.

“I think they’re two wonderful courses,” Harlow says. “Hankins starts low and works its way up; Craddock goes up right away, then comes down.”

But wait, there’s more: Below the simple pro shop/clubhouse/grill complex known as The Hideout is the Chief Egan, a nine-hole par-3 layout built around a pond and wetlands that makes for the perfect sunset emergency round — beer in  one hand, wedge and putter in the other. And next year a seven-hole target course called McVeigh’s Gauntlet will debut, giving golfers another bet-settling option. “As I understand it, it’ll also have a par-2 ‘bonus hole,’” Harlow says.

Silvies Ranch is zoned for up to 7,500 rooms but Campbell doesn’t expect it to get anywhere near that big. But it will indeed grow soon. The resort opened with 34 rooms and 44 beds spread over several cabins and a Ranch House, all appointed in “rustic luxury” — the two-bedroom lake cabins have separate king bedrooms with their own bathrooms with double-head rain showers, a large common area with kitchen, and small back porch with hot tub. There are RV hook-ups and the ranch also offers off-site lodging through local motels. The central Lodge is a former barn/bunkhouse that Campbell remodeled into a lovely single-story log cabin with full bar and restaurant with a pool room thrown in for good measure. On the dinner menu, which is served family style, is Silvies Ranch-sourced beef, pork and cheval, otherwise known as goat, which Campbell says is the next big thing in American cuisine as the nation’s population welcomes more non beef-eaters from Africa and Asia. It also happens to be delicious. Golfers can get breakfast and lunch at the Hideout as well.

When the resort reopens next spring (it’s currently closed for winter), several more cabins will be online; full-service spa with half-sized Olympic pool will pamper guests. And Campbell will fully staff for what he considers the property’s biggest draw — the ranch experience itself, including cattle drives, Razor tours into the backcountry, target shooting (he’s already build ranges for pistols and rifles), eco tours, hunting and fishing. “We want this to be a place for corporate retreats,” he says.

In the meantime, adventurous golfers should plan to nail down a trip to this corner of the Oregon Outback. You’ll have to wait until 2018 to taste what Campbell, Hixson and their team have cooked up, but you’ll savor it from the first swing.

“Dr. Campbell, Sandy and Dan have a big vision, and the resources and creativity to execute it,” Harlow says. “They are building something that’s special.”