Mention the word “Reno” to many folks over the past decades, and they might have raised an eyebrow with thoughts of gambling, drinking and other such pursuits. Those still exist, but these days, Reno is undergoing an impressive at-large metamorphosis into the city its residents have always treasured, with a buzzing arts scene, great restaurants, incredible special events, world-class brew pubs and distilleries and a diversifying economy. And yes — very, very good golf courses.

Mention “Lake Tahoe” and their eyes would glass over with thoughts of lounging on high-altitude beaches, hiking among the pines or schussing down one of the area’s myriad ski slopes. Or all three — perhaps in the same day, at certain times of year.

Reno-Tahoe is truly America’s Adventure Place as a recent slogan put it, with a mix of high desert and alpine terrain, some of the West’s best weather (around 320 days of sunshine each year), every kind of lodging imaginable, big-city cuisine and, within an hour’s drive, more than 40 public-access golf courses, from wide-open and affordable munis to save-up-your-shekels resort wonders to an impressive lineup of private residential-based clubs that have attracted thousands of retirees and relocation-minded over the years. And while it’s maturing as a destination with no new courses on the horizon — the most recent is Clear Creek Tahoe, a stunning private layout that came on board in 2011 — there’s plenty going on. 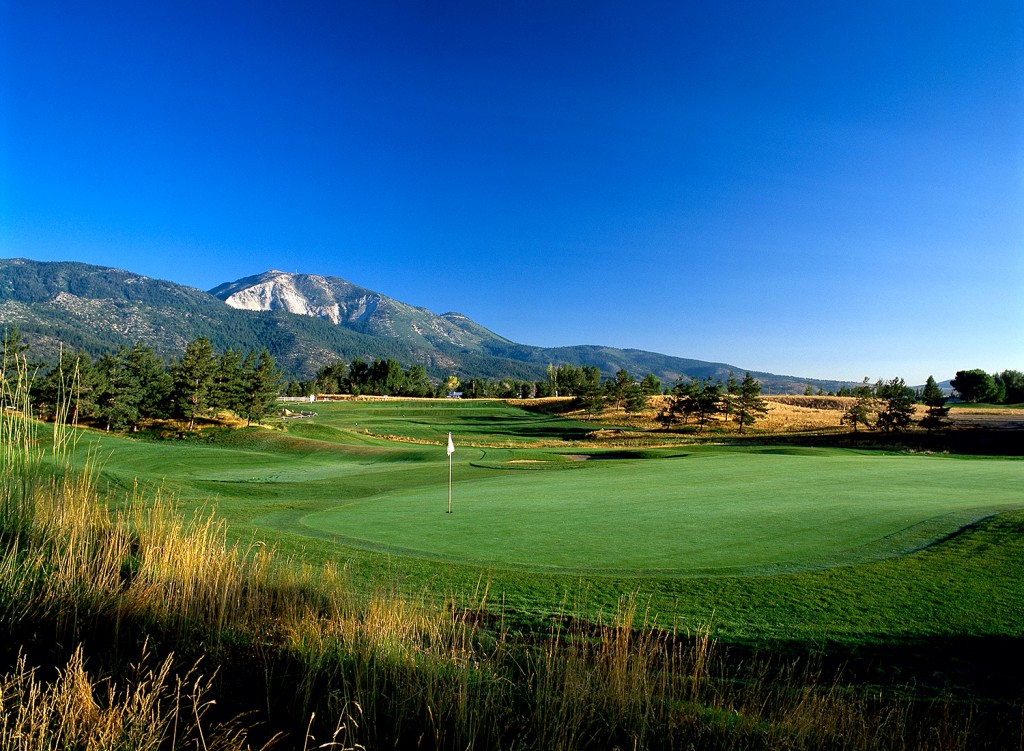 When the news came that longtime private favorite Thunder Canyon — a Robert Muir Graves gem located in Washoe Valley, just north of Carson City and 20 minutes from Reno — was opening to the public as Toiyabe Golf Club, the region rejoiced, including one Golf Tips editor who lives in Reno. The course is a true treat to play, winding among ponds and wetlands through much of its front nine, then dipping into the pines for several holes on the back — with 50-mile views of the valley and mountains on every hole.

Originally opened in 1994 as Lighting W Ranch, then purchased and renamed in 1999 by founding members Roger and Gayle Block, the course and club were recently sold to Reno developer, Stan Jaksick, who began his career in golf with his father, Sam, at LakeRidge — still a popular daily feel course in Reno — in the early 1970s. In 1997 the Jaksicks opened Montrêux Golf and Country Club in Reno (host of the PGA Tour’s Barracuda Championship since 1999), whose members took over ownership in early 2016. Jacksick’s first move is to open Toiyabe to the public while continuing to take care of its 235 members. “I love the golf business. When the opportunity arose to purchase Thunder Canyon, the timing was perfect,” Jaksick said. “I’ve known Gayle and her late husband Roger for years and they had a great facility with the potential to be a premier golf course.”

The word “Toiyabe” pays tribute to the course and club’s picturesque location in the foothills of the Toiyabe National Forest and the Sierra Nevada. To help make its public debut a complete success, Jaksick brings in a senior leadership team with a combined 60 years of golf industry experience, most recently at Montrêux, to oversee operations, finances and human resources. They’ll join the existing on-site management team led by General Manager Bill Gibson, Jr., and Director of Golf Dave LaFata.

Public tee times are now available with hotel stay-play packages on the way.

PUTTIN’ ON THE RITZ IN TRUCKEE

A half hour west of Reno on I-80 and just 15 minutes from Lake Tahoe’s north shore is the lovely former railroad burg of Truckee, which, over the past 20 years, has turned into a Northern California second home hot spot — with stellar golf development to match, including five public and resort courses and three private enclaves.

Two of Truckee’s most popular resort tracks, Old Greenwood (a Jack Nicklaus Signature design) and Gray’s Crossing (a Peter Jacobsen and Jim Hardy product that’s Audubon Certified) are part of a new summer golf package offered by the Ritz-Carlton Lake Tahoe, which sits majestically on a wooded ridge above the Martis Valley near the sprawling Northstar California resort complex. Available through Sept. 30, the “High Sierra Golf Experience” includes enjoy two 18-hole rounds either Gray’s Crossing or Old Greenwood, as well as deluxe accommodations at the resort. The Ritz’s Mountain Concierge handles all the details, from club storage, to booking tee times, to sharing insights about the region’s various other golfing opportunities (we recommend Coyote Moon, where nary a house is seen and the course unfolds like a mountain dream among woods, rock outcroppings, meadows and streams).

The package starts at $599 USD per night and is subject to availability. 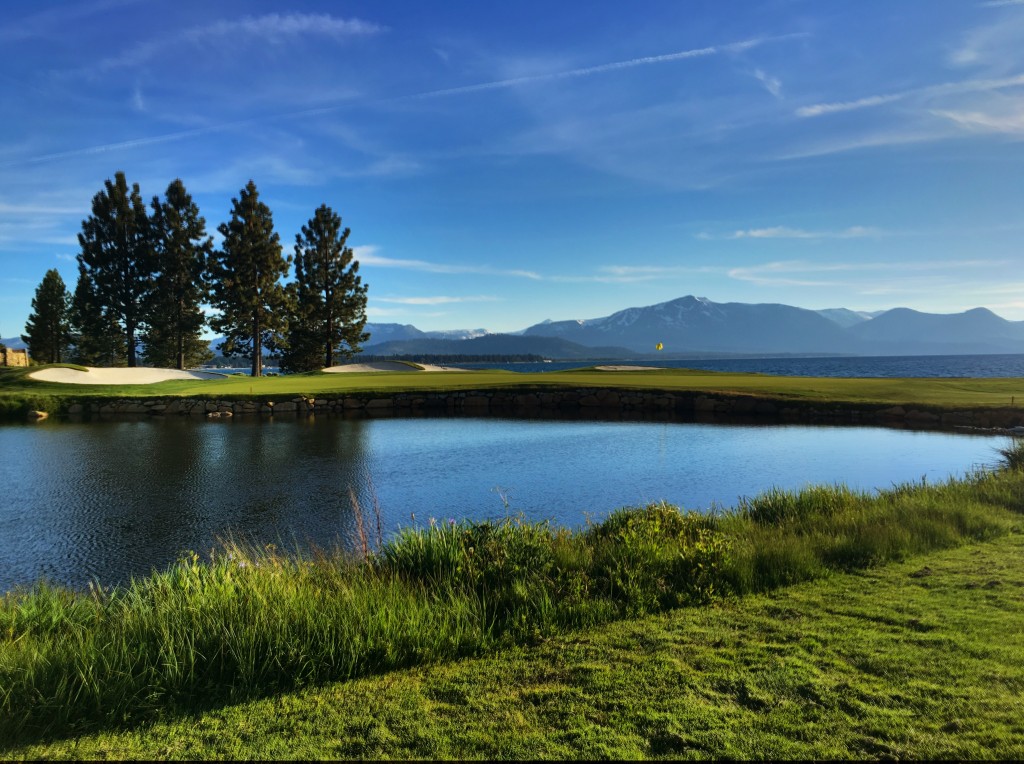 Say what? Perhaps the region’s most well-known public course and the only one right on the shore of Lake Tahoe, Edgewood Tahoe — host for the American Century Celebrity Championship every July — is undergoing its biggest overhaul of the past 15 years, and most of it isn’t even on the course itself. The sparkling new par-4 9th hole opened last year as its predecessor — generally considered the course’s weakest hole — was sacrificed to free up space for the long-awaited 154-room luxury Lodge that’s slated to open in June 2017. The new No. 9 is still a dogleg-right, but now it sits hard by the water, as do parts of the course’s famed finishing trio, including each of their greens. The inland holes are just as beguiling with ponds, elevation changes, tall-tree corridors, gentle meadows and solid but not overwhelming bunkering. The green on No. 7, another fine par 3, has been tweaked a bit to allow for more pin positions and better visibility from the tee. One Edgewood quirk: there are no doglegs to the left, so if you cut the ball as a righty, this is the Sierra circuit for you. And when you’re all done, Brooks’Bar is one of America’s best 19th holes, with a killer beer selection. The course beds down for winter around mid-October, so now is the time to nail down that tee time.

MEMBERSHIP HAS ITS PRIVILEGES

So we’ve established Reno-Tahoe’s public/resort golf course buffet as rich and varied as any in the United States. But for folks looking to join a club at any life stage, the array of private options is impressive indeed.

We’ve mentioned Clear Creek Tahoe, whose centerpiece is a truly towering design achievement from Ben Crenshaw and Bill Coore — 18 holes of sweeping and soaring mountain golf featuring their trademark “minimalist” elements including hew-to-the-land fairway contouring, ragged-edge bunkers and huge, humped greens. A limited number of residential lots are tucked into the trees around the course, and a clubhouse/pool/spa complex is planned for the near future.

Up the road in Reno, Montrêux is the obvious high-end standard-setter, but several other family-friendly membership choices are in the mix including Somersett, a scenic desert course in the northwest foothills co-designed by Tom Kite; Red Hawk in Sparks, whose 36 holes (18 by Robert Trent Jones Jr., 18 by Hale Irwin) alternate daily between members and public play; ArrowCreek, another 36-hole collection (the Arnold Palmer/Ed Seay “Legend” and John Harbottle/Fuzzy Zoeller “Challenge”) at the base of Mt. Rose in south Reno; and Hidden Valley, a classic old-school track on the east side of town that boasts some of the area’s best greens. Initiation fees and monthly dues vary widely and there’s a price point for just about everybody.

Finally we head back to Truckee, where a “golden triangle” of modern private clubs occupy a mix of meadows and wooded hills in the southwest corner of the Martis Valley, giving north Tahoe four clubs in all (Tahoe Donner, a semi-private offering just north of town, had the region to itself since the 1970s). Lahontan was the first on the scene of the new second-home wave, opening in the late 1990s with a flawlessly conditioned Tom Weiskopf-authored course and low-profile clubhouse/cabin residential configuration. Over the past decade and right next door to Lahontan came two more rarefied membership options — Schaffer’s Mill (formerly Timilick Tahoe), which has a fine new clubhouse/pool complex to bolster a fine Harbottle/Johnny Miller course with one of the best back nines in the area; and Martis Camp, which quickly became the choice for the money-is-no-object crowd thanks to a staggeringly beautiful and challenging “blank check” Tom Fazio golf course, followed by a massive clubhouse/member lodge. An impressive list of Silicon Valley moguls and professional athletes are among its members, and it has already hosted several high-profile USGA events including the U.S. Junior Amateur.

THE HEAT IS ON

Well, not really — summer temperatures in Reno-Tahoe, especially Tahoe, are downright perfect — but it’s clear that this sweet sliver of the West should be on your next getaway itinerary. You might just decide to stick around. For a great overview of the region’s attractions, events and recreation options including golf, visit www.visitrenotahoe.com