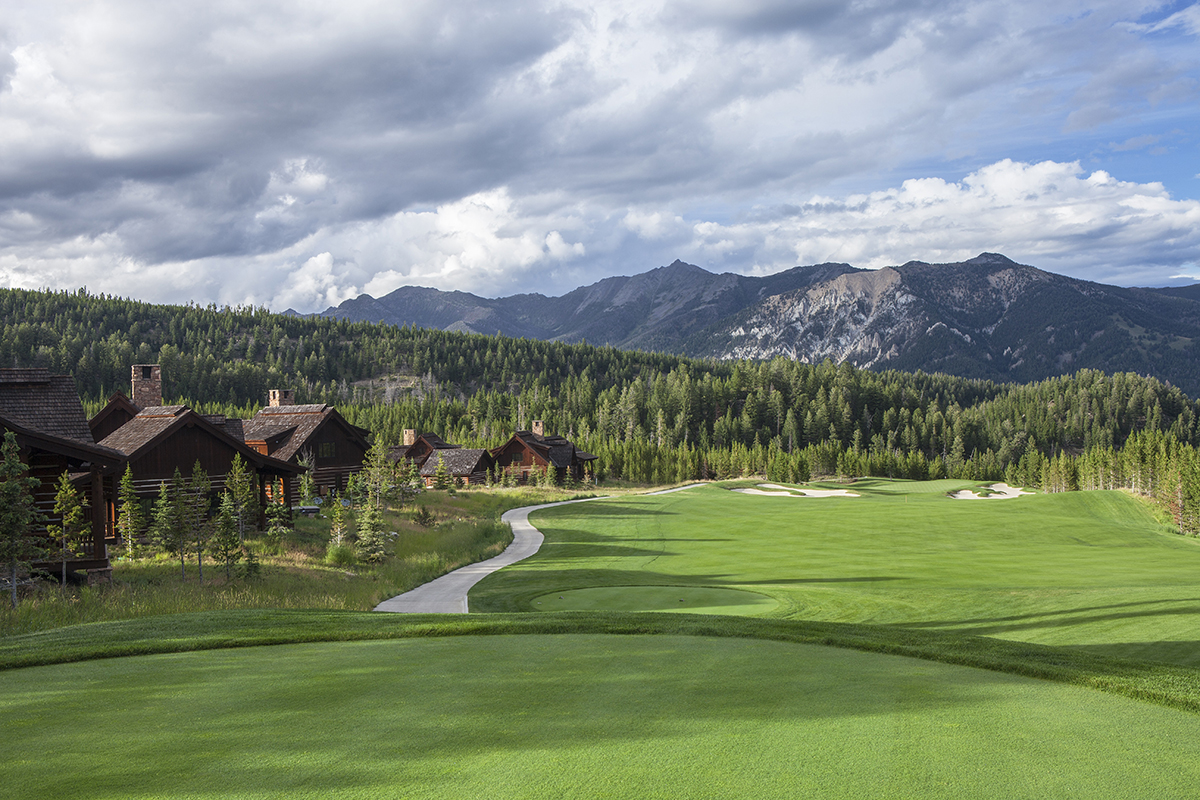 There is a place to relax and unwind in the American West, a bigger-than-big ski destination in the northern Rockies that slips into flip-flops and T-shirts when the snow melts and summer arrives. It’s called Big Sky.

Located an hour’s drive south of Bozeman, a trendy little town of tidy brick buildings known for its gastropubs (local ales, bison burgers) and Museum of the Rockies (dinosaur boneyard), Big Sky Resort loomed into view after the 1992 release of A River Runs Through It, the fly-fishing epic starring Brad Pitt that was filmed on the nearby Gallatin River.

Unmatched for alpine splendor, Big Sky is dominated by Lone Mountain, a 11,166-foot, Matterhorn-like peak that pierces the sky and ranks among the tallest peaks in the Madison Range. On a typically sunny day, the play of shadow and light on its slopes and ridges is mesmerizing.

Big Sky recently embarked upon a 10-year, $150-million development program intended to catapult it into the league of the West’s top mountain resorts, including Aspen, Colorado, Jackson Hole, Wyoming, and Sun Valley, Idaho. In addition to its massive size and rustic charm, it has one distinct advantage: the resort is only 18 miles from the northern boundary of Yellowstone National Park, the nation’s oldest park and the most active geothermal region on earth.

Big Sky will always be a “crunchy granola” kind of place that attracts fitness-oriented enthusiasts, but the recent emergence of golf as a major pastime in this exalted landscape is drawing players to a trio of vacation-worthy courses.

In ascending order, there’s the Arnold Palmer-designed course at Big Sky Resort, a lightly bunkered, 6,800-yard layout circa 1973 that stretches across the valley floor. Moose frequent its bushy streams, which are forks of the Gallatin River. The gently rolling fairways are generously wide, but a thick collar of primary rough will snare errant shots. If you’re looking for a sporty warm-up round to shake off the rust, Big Sky, a straightforward parkland-style layout known for its speedy, tilted greens, is a perfect place to let out the shaft and get acclimated to the altitude. Walkers are welcome, but at 6,300 feet above sea level, make sure your lungs can handle the thinner air before setting out.

Settle into one of well-appointed guest rooms in its clubhouse or book a golf package, and you can gain access to Spanish Peaks, the tony four-season resort community set below a curtain of jagged mountains. The centerpiece of the 3,500-acre community, 70 percent of which is preserved as open space, is a majestic spruce-beamed clubhouse that resembles Yellowstone’s Old Faithful Lodge. Managed by Montage Resorts (a future 5-star hotel is planned), the clubhouse is a stone’s throw from a splendid Tom Weiskopf-designed course routed in a secluded valley below the serrated Spanish Peaks. Weiskopf roamed the land on horseback over 10 years ago to get a feel for the flow of the terrain before charting the holes through a rolling, wooded valley dotted with specimen fir and spruce trees.

Routed at nearly a mile and a half above sea level, this beguiling layout, stretching to 7,200 yards, offers risk-reward scenarios at nearly every hole. Greens are subtly contoured and very swift. The bunkers are beautifully sculpted and well-placed. The front nine, set at lower elevation and more heavily wooded, gives way to a rollicking back nine that’s reminiscent of the Scottish Highlands, the fairways pitching and tossing across rolling alpine meadows.

Weiskopf, ever the clever strategist, built an 18th hole with two greens that plays either as a par 4 or a par 5 depending on how the course is set up that day. To settle bets, he also designed a short, entertaining 19th “Bye” hole.

A short hole is a fun way to end the round, but the best and biggest reason to visit Big Sky is to experience The Reserve at Moonlight Basin, a literally breathtaking Jack Nicklaus-designed world-beater debuted in 2015. Walled in by towering crests and stretching to 8,000 yards from the tips, Moonlight Basin has over 1,000 feet of elevation change. Spread across more than 800 acres and linked by 10 miles of cart paths, the course is grand-scale in a Himalayan kind of way, with near limitless mountain views in all directions, including massive peaks in the Madison Range and a pleated wall of Spanish Peaks. You can hear the silence: the layout possesses a quietude not often found on modern courses. By round’s end, Moonlight Basin, quite simply the most spectacular mountain golf course in America, will leave you gasping for superlatives. It’s also wild: The golf carts carry bear spray.

There are lengthy drives from green to tee at Moonlight Basin, and no one completes a round in under five hours, but that’s part of the experience. Instead of a yardage guide, there’s a Trail Map. The topsy-turvy layout offers more than jaw-dropping views as it rambles across rugged mountain foothills. Each hole is strategized to reward bold play while giving players of lesser attainment plenty of bail-out room. Conditions are uniformly firm and fast. Not every hole is an architectural triumph—the terrain is unyielding—but there are several holes that are by turns incredibly challenging and totally unforgettable. As an aside, the slick bentgrass greens are anything but an afterthought—they have plenty of movement and command respect.

The par 4 opener makes quite an impression. From a series of top-of-the-world tee boxes slotted into a hillside hundreds of feet above an angled fairway, the tee shot, a forced carry over a gulch, is aimed directly to Lone Peak.  Players must select a club that will put the ball in play, a theme repeated throughout the round. Like Jack in his prime, you can tee it high and let it fly, but distance must be squared with accuracy. There are no guardrails at Moonlight Basin. The golf course is embraced by oblivion. Bid wayward shots a hearty “hasta la vista.”

The par-4 fifth hole plays to an infinity-edge green that clings to the side of a mountain and hangs above a yawning abyss. It resembles a hole you might see in one of those outlandish fantasy golf calendars. The stunning par-3 seventh, backdropped by Fan Mountain, plunges downhill to a two-tiered green staked out by mature Douglas fir and spruce trees.

While the magnificent 590-yard 15th hole skirts a pair of central bunkers and climbs to the high point of the course at 7,500 feet, the gargantuan par-5 17th, which tops out at 777 yards, is an overland journey that takes its place among the grandest three-shotters in the nation.

After the round, drop by the Moonlight Basin Tavern, which serves excellent pub fare, pours an array of regional microbrews and stocks more than 75 fine whiskies.

One caveat about Big Sky golf. Make haste. The season is short. Locals claim they’ve seen snow in every month of the year, but from early June through late September, players can expect warm sunny days, clear blue skies and a huge WOW factor.

Experience Big Sky at its best by booking the destination’s exclusive Legends of Golf package. The program features three nights in a private residence, a round of golf at Big Sky Resort, and a round each at the otherwise-private clubs at Spanish Peaks and The Reserve at Moonlight Basin. Rates start at $308 per person, per night based on quad occupancy.  www.lonemountainland.com

As a family-friendly resort, kids may have the best of it at Big Sky. The Ramcharger chair lift ascends from Big Sky’s village plaza to ‘Adventure Mountain,’ a summertime playground where kids can try their hand at archery, bungee trampoline, disc golf and other games. Would-be prospectors can dump rubble into a sluice and sift for tiger’s eye, amber, amethyst and other gemstones. (Montana is the Treasure State).

Also located at the head of Ramcharger is Everett’s, a handsome log dining room set at 8,800 feet that features locally sourced American alpine fare at its finest. (The demi-glace morel mushrooms served on butter-grilled sourdough are alone worth the ride up the mountain).  More casual dining is available on Everett’s spacious deck, which features stupendous mountain views. Accommodations at Big Sky are available at multi-bedroom chalets, lodges and cabins as well as The Summit, one of the finest slope-side hotels in the Rockies.

CLUB DOWN FOR ALTITUDE

It’s important to remember that shots will fly farther in the thinner air of Montana’s mountains. This is especially true for strong players. Light hitters who don’t carry the ball more than 150 yards on their drives won’t notice an appreciable difference in the length of their shots at higher altitudes. However, golfers who hit the ball hard, resulting in a steep launch angle, high trajectory and extended carry time, should figure on roughly 2% added distance per 1,000 feet above sea level. Club selection must be adjusted accordingly.

Players should spend time at a distance-marked practice range to determine how far each club travels. Because each course In Big Sky is situated at well over a mile above sea level, power hitters can subtract 10 percent from marked yardages. For example, from 150 yards, select the club you hit 135 yards. Lofted shots that hang longer in the air will travel farther than low, boring shots.

Don’t trust your visual frame of reference on Big Sky’s courses. Players accustomed to “eye-balling” distances on their home turf will be fooled at higher altitudes, where the air offers less resistance to the ball’s flight. Gauge your distance for each club on the range–and club yourself accordingly on the golf course.