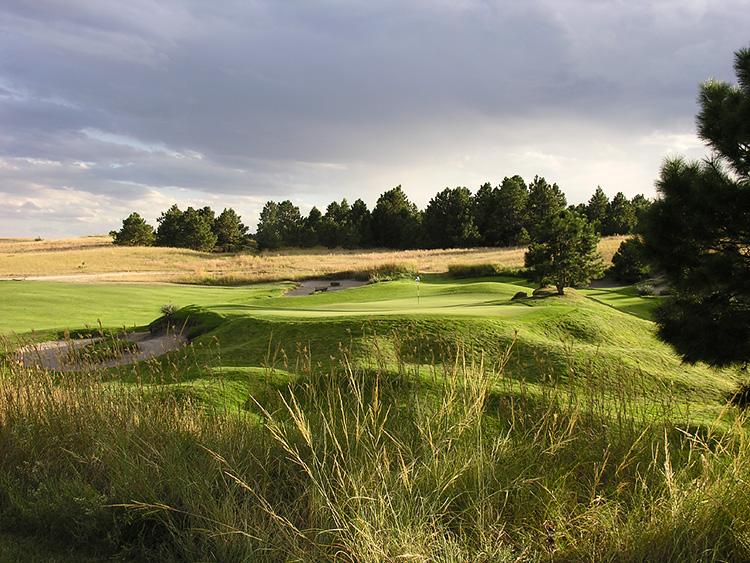 It doesn’t take much effort to feel the golfing gravitational pull of Nebraska’s Prairie Club. After five years in business just a few miles from the South Dakota border, on the scenic edge of the Cornhusker State’s stunning Sandhills, the remote resort — you’ve gotta negotiate a couple miles of dirt road to get there from what passes as the nearest main highway — has attracted some 400 members, most of them from the upper Great Plains but some from as far away as San Jose, Calif. It’s got that kind of unique and refreshing allure.

Take retired businessman and former college physics professor Geoff Fox, for instance. Founder of Fox Apparel — motocross riders and fans will recognize that name — came across The Prairie Club while surfing the web one day a few years ago.

“I saw something about it online, made the trip out here and bought a membership on the spot,” Fox said over a plate of pasta in the Canyon Room, the resort’s public dining area overlooking the wooded Snake River Canyon and the 18th hole of Graham Marsh’s Pines Course, one of two full-length circuits that are as different from each other as two tight but single-minded siblings (the other course, the links-style Dunes, was authored by Tom Lehman and sports nary a tree). “This is maybe only the fourth or fifth time I’ve made it here, but I love it.”

Fox didn’t just fly in for the night, as some folks do — the closest commercial airport is in North Platte, about an hour and a half south, while both Omaha and Denver are five to six languid hours down the road. He had arrived that morning after driving three and a half days from San Jose in his Tesla. “I scoped out the charging stations along the way, got here and headed straight for the first tee of the Pines.” He planned to hang around for a couple days before continuing on to Chicago. “It’s been a great trip so far.”

No doubt about that. Prairie Club is as pure as destination golf gets, with a “national membership” dimension that has put it on solid financial footing. It’s staffed by locals who love being there and managers who, though they may come from a bit farther away — such as Head Professional and Director of Golf Loudon Steffes — put forth a brand of bedrock friendliness that can’t be faked. And while it’s tempting to just show up and hang out in the clubhouse bar and nurse a Moscow Mule or three, or lounge out on the big ol’ patio with a stogie, there’s little reason for any visitor, member or otherwise to stall or waste any time on their way to one of the big courses. They’re that good, mixing challenge, fun, strategic surprises, solid conditioning and, yes, view after stunning view.

Which is better, the Dunes or the Pines? We’ll call it a draw to keep the peace, though each has its adamant adherents.

With its first tee located a good quarter-mile or more from the Lodge’s front door, on the far side of the two-ended practice range, the Dunes is a wild, rangy rascal of a routing across heaving dunes, with dozens of bunkers that you know were there long before Lehman laid eyes on the site. You can see them all across the Sand Hills, exposed by eons of howling prairie winds, framed in shocks of tall fescue, just waiting for a great golf hole to rise up around them. Lehman and a crack earthmoving crew did their part, finding mostly huge, green complexes among the hillocks and creating broad, well-bunkered driving lanes — most of them beyond a forced carry of 50 to 120 yards — that pretty much beg for the big dog on every tee … though upon further review, after suffering the slings and arrows of a sneaky angle and diving deep into the native rough, you might pull a 3-wood or long iron the next time around. The very first hole presents such a tasty choice; there’s plenty of room on that uphill fairway some 230 yards away, but a layup just beyond a gaggle of cross bunkers is the better call for big hitters. The Dunes rolls and sways from there, way out into the yonder, far from any hint of civilization, before turning toward home. Lehman ratchets up the pucker factor starting at around hole 14, and doesn’t let up until you’ve negotiated the final two doglegs, one moving right, the other left, both canted along natural slopes and asking for your level best iron approach from what’s anything but a level lie.

The Pines, as we said, is a different animal altogether, no less beautiful or dangerous — some would say it’s the tougher go by a stroke or two thanks to the presence of pine and fir forests along several holes in the middle of the circuit, a couple sneaky crosscutting ravines, some rock outcroppings and the Snake River gorge itself, lurking just beyond the next rise (and right behind the green on the gorgeous, slightly downhill par-3 10th). Marsh proves a master of rhythm and nuance, smoothing transitions from wideopen prairie to forest and back again with clever design elements — subtle mounding, semi-blind tee shots (and on the spectacular par 5 16th, a blind second shot, too), greens nudged up against hillsides or ensconced in natural amphitheaters. And while its middle stretch is sweet indeed (No. 9 is as fine a reachable par 4 as you’ll ever find), the finish is world-class, including perhaps the best finisher in the state, a hard-bending par 5 bordered by dense brush and the gorge on its inner elbow, with a necklace of bunkers bisecting its tumbling fairway. Chances are you’ll putt out in front of a small crowd not 30 yards away, knocking back beers and tucking into a big Nebraska-grown ribeye, so bear down and drain that sucker.

Yep, it’s all about the golf at the Prairie Club. There’s no spa, no swimming pool, few other distractions beyond the occasional bird hunt along the river. And while it’s surprisingly popular among vacationing couples who might or might not play golf, the overwhelming majority of activity is with guys’ groups. That’s just how owner/developer Paul Schock drew it up when he envisioned this place, hired architects, watched the plans for the courses take shape (including Gil Hanse’s tricky and fun threepar, 10-hole Horse Course, perfect for a late-afternoon emergency round with a craft beer in one hand and a couple wedges in the other) and oversaw the construction of Prairie Club’s handsome three-story, 40,000 sq. ft. lodge with its mix of richly appointed yet straightforward single rooms, double and two-bedroom suites — and nearby Canyon Rim Cabins, three of them altogether, offering four to eight bedrooms. He figured the region needed a middle-range destination to round out Nebraska’s surprisingly rich golf landscape; with the world-renowned, Top 5-ranked Sand Hills just 75 miles away — it’s ultra-private and therefore as out of reach for most folks as Cypress Point or Pine Valley — and another semi-private operation, Dismal River, even closer, The Prairie Club was perfectly positioned to become a strong magnet for getaway-hungry golfers from the Dakotas, Minnesota, Colorado, Wyoming, and southern Canada. From the courses’ opening each May to when they bed down in late October, traffic is steady, grateful and never overwhelming.

Get the big picture? This place is worth a special trip no matter where you’re coming from, or what mode of transport gets you there — Tesla or pickup truck, commercial bird or private plane. After all, this is Nebraska, friends. The definition of centrally located, smack in the middle of the continent, a flyover state no more. Especially if you’re packing sticks.