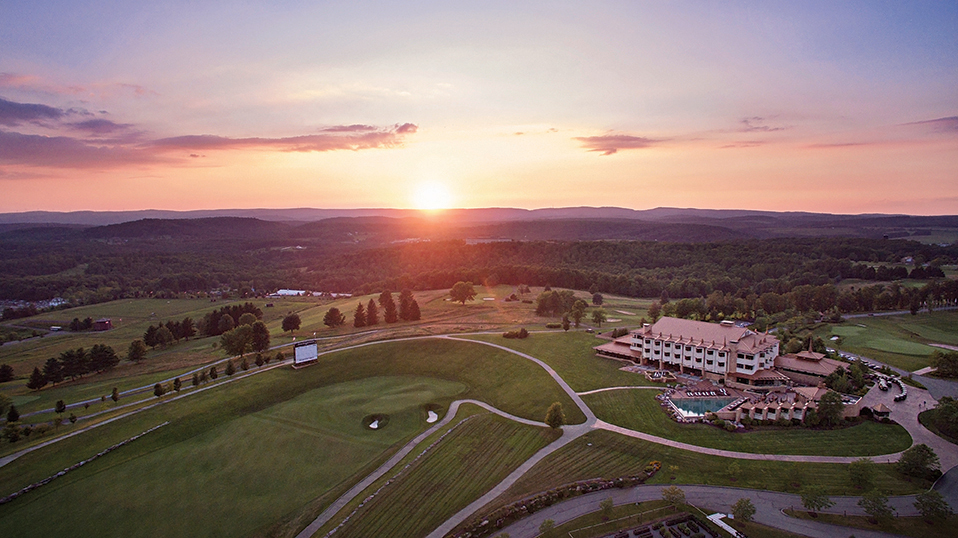 In 1740, Chief Nemacolin of the Delaware Tribe helped a frontiersman named Thomas Cresap build a trail from Cumberland, Maryland through the Laurel Highlands in the southwest corner of Pennsylvania. During the French and Indian War, Colonel George Washington and General Edward Braddock widened the trail the move troops, eventually establishing Fort Necessity. By the 1840s, Congress extended the Nemacolin Trail further west, and by the early 20thcentury the road became U.S. Highway 40, stretching all the way to California.

The bulk of Nemacolin Woodlands — the 23-year-old Mystic Rock and year-old Shepherd’s Rock courses, a recently expanded golf academy, three hotels and lodges, luxury townhouses and rental homes, several restaurants and lounges, tennis facility, spa and wellness center, wildlife academy, casino and outdoor fun from ziplining to sporting clays and off-road tours in summer and the Mystic Mountain ski complex in winter — looks over a winding and scenic stretch of Highway 40 in a mountainous region that, over the decades, attracted well-heeled families from Pittsburgh 90 miles north. In the 1930s the Kauffman family, department store magnates, contracted an architect named Frank Lloyd Wright to design them a vacation home called Falling Water, now recognized as Wright’s masterpiece. By the late 1940s, Rockwell Industries CEO Willard Rockwell bought the 60 acres nearby that would, after several ownership changes including a key 1987 auction purchase by 84 Lumber founder Joseph Hardy Sr., grow into the world-class destination it is today.

Now 95, Hardy lives in a home on property while his daughter Maggie runs both the building materials business and the resort. As savvy entrepreneurs with abiding love for art, people and the finer points of hospitality, neither is content to stand pat in terms of what Nemacolin Woodlands offers travelers of every stripe, from golf groups to corporate retreaters to vacationing families. Every year seems to bring a restaurant refresh, addition to the activity menu or new piece of public art in a resort hallway, on a wall — even on a golf course. “There are 90 sculptures situated on Shepherd’s Rock,” said Nemacolin Director of Golf Tom Smith during a recent tour. “You won’t see that anywhere else.”

Nor will golfers see two more beguiling, fun, and, at times, quirky examples of the latter-day Pete Dye design ethic side-by-side than Mystic Rock, which hosted a much-heralded fall PGA Tour stop (the 84 Lumber Classic) from 2003 to 2006, and Shepherd’s Rock, which opened a year early, in summer 2017. Both tracks share all the flagship Dye flairs and filigrees — bunkers ranging from Sahara-wide to coffin-compact, water features that tighten shot angles and stress club selection and green complexes that reward approaches from the proper side of the fairway and repel careless or ill-executed ones into mounds, deep hollows or worse. From there, however, their personalities diverge in interesting and surprising ways.

Mystic Rock is the tougher go — 300 to 400 yards longer overfall from the white, blue and black tees and narrower to boot, though driving lanes are negotiable on more than a few holes thanks to beautifully rendered fingers of fairway bisected by grassy ledges or pushed-in bunkers, some sporting those lovely railroad ties. The par-5 8thand par-3 12th offer two greens that dramatically change approach strategy, and each of the four one-shotters plays over water or broad swatches of dense waste area. Dye’s vaunted eye and feel for dramatic rhythm is in full force; the first couple holes of each nine are relatively straightforward, but by the home stretch you’re either gasping for please-let-me-salvage-par breath or applauding your danger-averting chops. Mystic’s four-hole finale is truly epic, with the par-4 18thmoving inexorably uphill for its second half to a large green with plenty of bailout to its left and the handsome, three-story Wright-inspired Falling Rock Lodge — Pennsylvania’s only Forbes Five-Star, AAA Five-Diamond hotel, complete with butler service, custom pillow options and three restaurants including the upscale Aqueous steakhouse — just off to the right.

While Shepherd’s Rock is a few strokes more player-friendly on balance, it serves up its share of looks and shots that border on extreme even by Dye standards, thanks to hillier terrain and some challenging transitions that led the design team to go with a par 37-par 35 configuration, with three par 5s on the outward nine starting with the gorgeous opener. It asks for a big, healthy drive downhill to a sweeping right-to-left trek that moves uphill the rest of the way, between gaggles of bunkers and a constricted throat of fairway about 110 yards from an elevated green bracketed by six traps of its own. Playing a whopping 619 yards from the tips, No. 4 ups the visual-wow par 5 ante with a towering bunker dividing the fairway in two, a risk-reward second-shot scenario and one of the circuit’s smaller greens. The front side finishes with a stirring three-shot flourish, another uphiller with a mountaintop green set against a broad sky, its surface all but hidden from view from about 150 yards and back. A quick stop at the resort’s new at-the-turn food truck — don’t miss the cheeseburger soup — leads into the course’s most mind-bending stretch. Holes 10 and 11 are short and mid-length par 4s respectively, the first hugging a steep side slope with big waste areas just off the tee and dead in the middle of the landing area, the second a right-angled puzzle with an all-carry approach over wetlands; the further you can bust it off the tee, the gentler that carry is. It’s all up, down and sideways from there to a final, stout par 4 bordered by a steep hill left, water right and a waterfall behind the green.

LEARN FROM THE BEST

Yep, ol’ Pete does it again, and if you want to give yourself a fighting chance to play both courses at your best, consider a learning session at the Nemacolin Golf Academy with Director of Instruction Eric Johnson, who spent 13 years at perhaps the toughest American course of them all, Oakmont Country Club. He and fellow teacher/master club fitter Patrick Kane have all the latest swing- and stroke-measuring technology at their disposal; the practice facility both at the academy and next to the courses are a dedicated golfer’s dream.

A RESORT IN FULL

On that note, if you find your way to Nemacolin Woodlands for the golf above all — of course you will — Falling Rock is the place to stay, while Nemacolin’s two other main lodging options, the original Tudor-style Lodge and 124-room Chateau Lafayette (whose design is inspired by the Ritz Paris) are a two-minute shuttle ride away, as are the Woodlands Spa, Lautrec (where Chef Kristin Butterworth works yet more Five Star/Five Diamond magic), brand new Rockwell’s Restaurant, Tavern Sports Bar, PJ’s Ice Cream Parlor, Cigar Bar and more. Along the way is a cool putt-putt course, glass-walled classic car and airplane mini-museums, art center, meeting facilities and other amenities that help fill out an unmatched Mid-Atlantic menu of fun and adventure — with popular tourist spots such as Laurel Caverns a short drive away.

Getting There: Nemacolin Woodlands is more centrally located that one might think — 90 minutes from Pittsburgh’s airport, two and a half hours from the Washington, D.C. metroplex and a scant four hours from Manhattan. The Hardy family has built a truly special place in this historic corner of the Keystone State, so why not make a little history of your own?