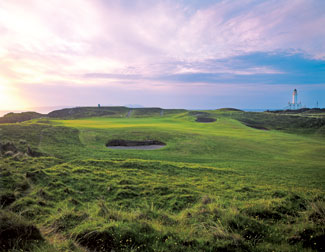 Irish Golf. From the windswept dunes of Lahinch, Ballybunion, Portmarnock, Doonbeg and Waterville to the spectacular cliffs of Old Head and the rolling parkland of a former earl's estate at Adare Manor, Ireland supplies golf that can't be found anywhere else. In fact, if you ask most golfers who've vacationed in Scotland and Ireland which place they prefer, you'll get a conflicted answer. While Scotland often gets the nod for pure historical significance, the traveling golfer frequently gives Ireland the nod for sheer diversity and its dramatic landscape. In addition, Ireland has Old Head, surely the world's most spectacular golf course with its elevated 350-degree views of Courtmacsherry Bay and the Celtic Sea.

Ring Of Kerry. Playing golf in Ireland, in particular the southwest corner (counties Cork and Kerry), affords not just some of the world's greatest golf, but also some of the world's most charming towns. The drive from Waterville Golf Club to Old Head (aka, the Ring of Kerry) is full of picturesque small towns, photos of which grace the pages of guidebooks and Travel Channel programs. Be forewarned, navigating the Ring takes time, patience and, we might suggest, a small car. The roads are narrow, winding and the topography changes dramatically from sea level to cloud enshrouded mountaintops along the stretch. But the payoff is worth it. Towns like Sneem, Kenmare and Bantry are just a few examples of Ireland's so-called "Tidy Towns," which are clean, vibrant, charming villages with brightly colored pubs and restaurants. 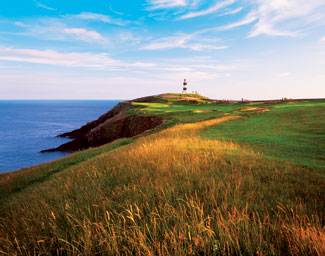 The Irish. It would be hard to find a kinder, more hospitable group of people than the Irish. Sports mad and down-to-earth with a love of golf, hurling and Gaelic football, the Irish have a direct connection with the States and it shows. Don't be surprised if you're paired with Americans, as much of the tourism comes from the States. But should there be just two of you (the Irish call such a pairing a "two-ball"), hire a caddie or rent a pull cart ("trolley") and find some locals to share the experience. Their love of golf and its customs is infectious.

Stirling Castle. Stirling Castle is arguably the most famous of Scotland's castles and one of the most popular attractions in the entire country. Located atop an extinct volcano, Stirling Castle was a key military stronghold during the Scottish Wars of Independence and the site of the famed battle of Stirling Bridge where William Wallace (of Braveheart fame) led the Scots to victory over the English. Other important historical events surrounding the impressive structure include the Battle of Falkirk, when Edward I regained the castle for the English, and the later siege by Robert the Bruce which resulted in the Castle changing hands once again.

The Highlands. This mountainous region of Scotland in the north of the country features a wide variety of sights and activities, including numerous castles like the impressive Urquhart Castle situated next to famed Loch Ness. Whiskey distilleries like Glenmorangie, Glen Ord, Dalmore and Talisker also abound in the Highlands, giving visitors the rare chance to witness the art of making single malt Scotch. A variety of outdoor activities, including hiking, kayaking, sailing and horseback riding, are plentiful in this beautiful wilderness area, as well as lots of great golf at top-notch courses like Royal Dornoch, Nairn, Boat of Garten, Brora, Tain and Inverness.

Edinburgh. Scotland's capitol, located on the east coast on the Firth of Forth, is one of the most exciting and interesting cities in the UK. Featuring loads of first-class dining, sightseeing (Edinburgh Castle) and cultural activities, Edinburgh is a destination that travelers to Scotland shouldn't pass up. A great time to visit this both ancient and modern city is late summer, when the famous Edinburgh Festival takes place. Anyone who enjoys theater, live music, fine art and political discussion will like this exciting event. Golfers will also appreciate the high concentration of outstanding, classic golf courses located in the Edinburgh area, including Gullane, Musselburgh, North Berwick and West Lothian, as well as a slew of modern designs like Craigielaw. 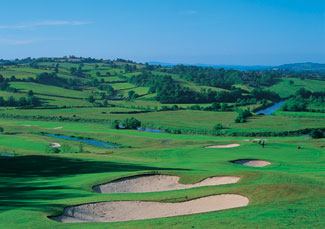 Cardiff. The capitol of Wales is a mere two-hour drive from London and is accessible via its own international airport. No visit to Cardiff would be complete without a trip to the impressive 74,000-seat Millennium Stadium, which hosts a variety of sporting events and concerts. Wales Millennium Centre, which is host to seven major art organizations, including the Welsh National Opera, is also worth a look, as is Cardiff Bay's Techniquest (like Epcot, but a lot better). Outstanding golfing opportunities are also available in the Cardiff area, most notably at the nearby Celtic Manor, home of the 2010 Ryder Cup. This 330-room luxury hotel and spa boasts 36-holes of championship golf, as well as a top-notch golf academy and unique par-59 academy course.

Harlech Castle. One of the most spectacular sites in all of Wales, Harlech Castle dates back to the time of King Edward I (1283) and was constructed as part of England's "iron ring" of castles which protected the vast Welsh area of Snowdonia. Today, the amazing structure hasn't changed much from the days when it was the focus of endless sieges from both English and Welsh alike. One of the greatest ways to enjoy the area of Harlech is to take a tour of the Castle and then descend into town and play a round at Royal St. David's, one of only two Royals in the entire country. A premium-quality layout, St. David's provides a championship test with the unique experience of having a view of a 13th-century castle.

The Grove. Formerly a country estate, this ultraluxurious resort (managed by Troon) features five-star accommodations and a terrific course designed by Kyle Philips of Kingbarns fame. Located just 30 minutes outside London, the Grove offers an English parkland feel, great golf and the opportunity to spoil yourself with comfort.

2. Gleneagles Hotel
Located in the heart of Scotland, Gleneagles not only has first-class golf courses, but also a variety of other interesting diversions, including skeet shooting, horseback riding, falconry and off roading.

3. Westin Turnberry Resort
A classic Scottish hotel that features a first-class spa and traditional, elegant dining and decor. No visit to Scotland is complete without a stop here.

4. Adare Manor
An ultraluxurious Irish manor/castle that's sure to take your breath away.

5. Celtic Manor
This huge, somewhat corporate facility provides guests with the utmost in comfort. Fantastic rooms, a choice of fine dining experiences and solid golf are all available.

2. Golspie
You probably haven't heard of it, but Golspie offers one of the most beautiful settings in Scotland. A pleasing mix of links, heathland and parkland holes make it a winner.

3. Dooks
This isn't one of the better-known tracks in Ireland, but it's one of the most fun. Unique features like palm trees and casual dog walkers provide character.

4. Pennard
An unusual links perched high on a promontory above the sea, Pennard offers golfers a stunning setting, some wacky bounces and free-roaming Welsh horses.

5. Tenby
Considered one of the oldest courses in Wales as well as one of the best.

5 Things You Need To Know

1. Northern Ireland's Unique Courses
Some of the best, most traditional courses in the world reside in Northern Ireland. If you want a fantastic experience that most of your friends probably haven't had, check out the Giant's Causeway, Royal County Down and Royal Portrush._Ê

2. Pounds, Euros And Dollars
When traveling to the UK (comprised of England, Scotland, Northern Ireland and Wales), you'll need to change dollars for pounds, which can cost a pretty penny. Ireland can be a bit cheaper to visit because its current monetary unit is the euro.

3. Be Prepared To Walk
There are very few places in Ireland or the UK that offer more than one or two riding carts, if any. Instead, pull carts (trolleys) are available, and caddies are optional at many courses. If you haven't walked in a while, get some work in before your trip. Believe it or not, walking will make your experience much more enjoyable.

4. Caddies Know Best
While caddies have mostly become a thing of the past in the U.S., they're alive and well overseas. If you want a caddie (we strongly suggest you take one when you can), be ready for some local color and good advice.

5. Driving On The Left Side Is Fun
Americans are sometimes hesitant to plan driving trips in the UK and Ireland—don't be. Driving on the left is easy and fun.