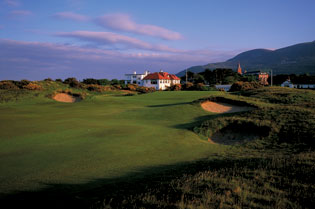 Like the mists that blow in off the Irish Sea, a sense of mystery tends to shroud golf in Northern Ireland. Indeed, the country itself possesses an aura of the unknown, particularly with Americans. It’s not as if the courses here are completely unknown, it’s just that they tend to be overshadowed by their more famous neighbors in Scotland, The Republic of Ireland and England. However, Northern Ireland has not only a rich golf history of its own, but also a collection of links layouts that stand up to any of its more heralded British Isles’ mates. Two, in particular, are capable of challenging for the title of best links course in the world: Royal County Down and Royal Portrush.

Royal County Down Golf Club
Located in the town of Newcastle, 30 miles south of Belfast, Royal County Down has imparted a solemn serenity for more than 100 years. This serenity may be dampened after a few trips into the impossible gorse that covers the immense sand dunes along the course, but a few deep breaths of salt air are all it takes to bring you back.

Likely the reason Royal County Down is strikingly beautiful as a golf course is because the land remains largely as it was when first formed by the retreat of the Irish Sea so many centuries ago. There’s absolutely no hint of imposed development. It has become a description overused, but the course seems as if it has existed here along Dundrum Bay in the shadow of the Mountains of Mourne all along.

None other than Old Tom Morris himself imagined the layout with some significant help from Mother Nature. Between the two of them, they created a stiff challenge for any golfer who ever picked up a mashie. There are no less than five tee shots where the landing area is hidden from view. Approach shots are extremely testy as well, with most greens well protected by flash-face bunkers. You’ll need a local’s skill to accurately read the greens.

If you must know, the course stretches all the way out to just more than 7,000 yards, par-71. The length is but one difficulty here. Bounces can be unpredictable, fairway bunkers maddening and distances deceiving. But if you’re playing for a score at Royal County Down, you’re playing for all of the wrong reasons.

Royal Portrush Golf Club
There may be no other golf course on the entire island with the historical significance of Royal Portrush. Nestled within the resort town of the same name, Portrush hosted in 1951 the first British Open Championship ever contested outside Scotland and England. But its roots go much farther back than that.

It also played host in 1895 to the first professional tournament ever held in Ireland. Want more? The first nine holes were laid out in 1888. That track, then called the County Club, bears no resemblance to the current course—the Dunluce (the Valley Links sit below this championship course). Designed by the famous Harry S. Colt in the early 1930s, this course has been described as magnificent, sound and subtle.

All three adjectives still apply to Portrush, but you can throw in mesmerizing, invigorating and hearty. This club, located about 40 miles north of Belfast, is as fulfilling a links golf adventure as you can ever hope to find.

Set upon land with less aggressive contouring than County Down, Portrush plays along the Atlantic Ocean on Northern Ireland’s northeastern most tip. It’s remarkable how often golfers who have played here comment on the quality of turf. But it’s true; the sand-based fescue provides an excellent surface to strike a golf ball. The massive and prevalent bunkers here are less pleasant from which to hit, especially the one they call “Big Bertha,” the aptly named giant that lurks on the right side of the 17th fairway.

When To Go:
Prime travel season is April through October. However, winters are relatively mild, but with a greater chance of rain.

Getting There
Direct flights into Belfast from all major East Coast cities. Preferred airlines are British Airways, Continental and American Arilines.