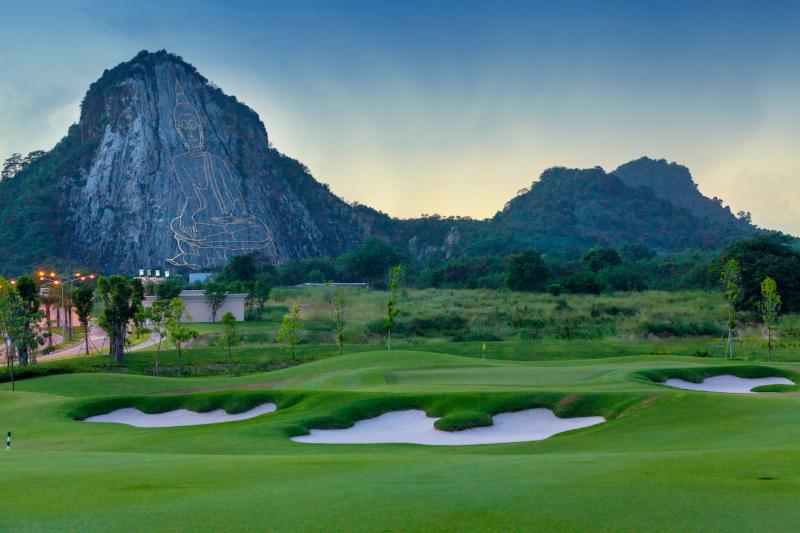 With a December christening at Chee Chan Golf Resort in Thailand’s Pattaya province, the course architects at Golfplan have again showcased their skill at integrating world-class golf holes with signature elements in the local landscape and culture.

On the eastern edge of the Gulf of Siam in a tourist destination about two hours’ drive from Bangkok airport, the dominant element is the Chee Chan Buddha, whose serene likeness has been carved into a limestone escarpment some 110 meters high. “Buddha Mountain” is one of the region’s best known tourist and devotional attractions. Today, his gilt-edged visage is visible from nearly every spot on the 220-acre property, including the entire opening hole.

“We couldn’t afford to miss that opportunity — to start golfers on their spiritual journey under the watchful eye of Siddhartha Gautama,” said Golfplan Partner David Dale. “The Buddha invites a decision on the very first tee: play conservative to the right/lower landing area and approach the green uphill, over deep bunkers — or drive more aggressively (left of the center bunker) to create a downhill approach to unguarded putting surface.

“We have much to learn from the Buddha, who taught us a ‘Middle Way’ between sensual indulgence and uncurbed asceticism. For golfers the larger message is unambiguous: Relax and keep it in the fairway.”

The Dec. 12 grand opening at Chee Chan Golf Resort brought to a close a busy year during which Dale and his partner in Golfplan, Kevin Ramsey, unveiled and otherwise celebrated a series of projects that cannily place golf in disparate cultural contexts:

“South Korean designs must, according to local custom, feature teahouses in the middle of each 9,” Dale explained. “We spent months routing and rerouting that stretch of the back nine at Nine Bridges — to create the perfect perch for that teahouse. We did the same on the homeward stretch to create dramatic views of Mt. Halla, which is sacred to the Korean people.

“At Chee Chan, the cultural aspect was ready-made and close by, but we accentuated the experience over and over again. By my count, holes 5, 6, 11, 14 and 17 all play toward Buddha Mountain — 11 and 17 afford golfers excellent views of a Buddhist temple nestled into a different hillside. The experience is unique precisely because it’s so unique to Thai culture.”

Formed in 1972, Golfplan has been introducing golf to new markets and maximizing cultural experiences for nearly 50 years. Based in Santa Rosa, California, USA, it is the most international firm in all of course architecture, having creating more than 218 original designs in 32 different countries (if master planning and renovation are considered, make that 85 countries). This sort of sustained, diverse productivity is one reason GolfInc magazine named Dale and Ramsey among the “Top 10 Most Powerful People in Asian Golf” for 2016.

Golfplan has worked extensively in Thailand. Their designs at Panya Park, Panya Indra and Mountain Shadow (down the road from Chee Chan, in Pattaya) all remain popular — and profitable, Dale is quick to add. But those courses were built in the 1990s.

“It’s a privilege to work again in Thailand, especially on a site so unusual. This is flat, coastal country here by the Gulf — but we had fully 25 meters of elevation change to work with at Chee Chan,” Dale reported. “The eye is naturally drawn to the escarpment featuring the Buddha, but the property is ringed by these limestone karsts — some are 150 meters tall. The perimeter holes play uphill to their bases, then back down again. These enormous features give the entire course both an amphitheater feel and a pleasing sense of seclusion.

“In this environment, it’s tempting to shape the golf course in competition with these large features. But I think we struck the right balance. The contour is flamboyant but toned down through the landing zones. There are several cavernous valleys that separate the holes, which tend to melt over and between these landforms. With the introduction of drought-tolerant bahia grass to frame and accent all this, it’s a pretty stunning tableau.”

Buddha Mountain was created on the northern face of Khao Chee Chan in 1996, to commemorate His Majesty the King of Thailand’s golden jubilee. It’s been a major domestic tourist draw ever since — enough to invite subsequent development of a water park, winery and shopping district. With new accommodations and world-class resort golf added to the mix, this corner of Pattaya (just 90 minutes from Suvarnabhumi International Airport) is a fully fledged destination unto itself.

“I love golf,” said Narit Chia-Apar, founder of Chee Chan Golf Resort and chairman of the developing entity, Chartered Square Holding Company. “I know how golfers think and what they want. I know the level of service that is expected, and so I built the course based on the needs of myself as a golfer, and not just as an investor. Whatever I see fit to give the best impression for our visitors, I will make sure that we have it here.”