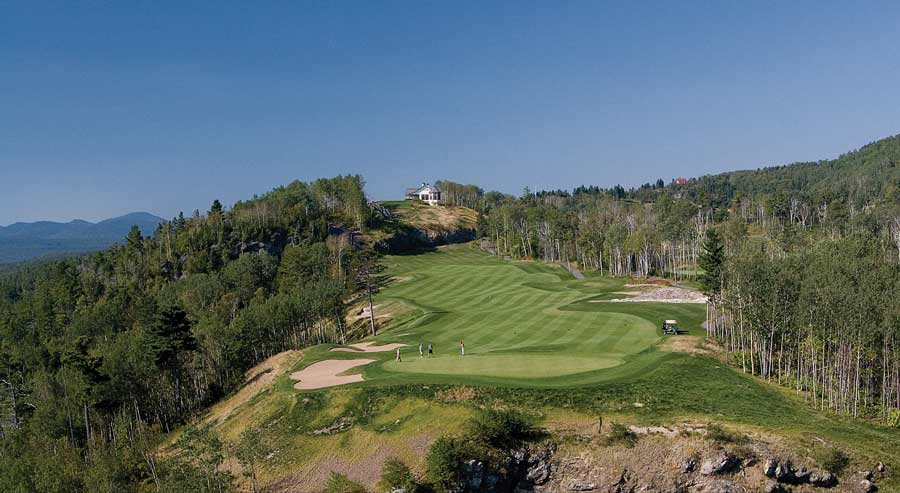 Narrow cobblestone streets – lined with cozy cafés, cheese and wine shops, boutique bakeries, and so on – meander down the hillside to the quaint harbor. The ancient stone buildings, many adorned with turrets and tin roofs, date back to the 1600s. French is the only language you hear. Walking down the street, you’d swear you’d stumbled on some charming riverside city in France. Except here, the Seine is the St. Lawrence. And you’re in Quebec City, Canada.

Unquestionably, the province of Quebec, thanks to its Francophone culture, is a special place in Canada that’s unlike any other province. And Quebec City, a history-rich fortress of approximately half a million people that sits on the St. Lawrence River 150 miles northeast of Montreal, is the epicenter. It’s also home – especially if you include the charming Charlevoix region north of the city – to some spectacular golf.

But, to do this part of the world justice, sauntering along the ancient streets of Old Quebec is a mandatory experience. A fortified, stone-walled city within the city, Old Quebec dates to 1608. It’s a UNESCO World Heritage Site and exploring this city will give your Canadian holiday a distinctly European flavor. Punctuated by the towering Fairmont Le Château Frontenac – a luxurious landmark hotel, a castle, that rises above the river in the heart of this charming city – Old Quebec, which consists of the Upper Town and the Lower Town, is a treasure. And booking a stay at the Fairmont Le Château Frontenac is highly recommended. The hotel, which is said to be the most photographed hotel in the world, is within easy walking distance to the Plains of Abraham, the stone fortifications and iron cannons that ring the old city, the cobblestones of Petit-Champlain (dubbed “Canada’s prettiest pedestrian street”), and Place Royale, the beautiful public square where the city was founded.

Fittingly, golfers visiting Quebec City will also find a blend of old and new. No doubt, after exploring the city, the avid golfers in your party will want to explore some fairways. While Quebec City does not boast a high concentration of courses, you can definitely find some outstanding golf.

Golf La Tempête, for example, which is located just fifteen minutes from Old Quebec, features a beautifully shaped parkland course – with some stadium-golf overtones — that has hosted some of the best players in the world. In 2009 Fred Couples, Sergio Garcia, Ian Poulter, Geoff Ogilvy, and Mike Weir battled it out there in the Telus World Skins Game. Ogilvy was the big winner, pocketing a cool $150,000 for his nine skins. La Tempête was also the site of the 2014 PGA Tour Champions Quebec Championship, which was won by Wes Short, Jr. The club is currently nearing completion of a second championship course, which is scheduled to open in 2021. Brothers Darren and Warren Huxham have done the design work on both courses.

But golfers seeking a definite “wow” factor should make their way north of Quebec City into the charming Charlevoix region. A beautiful and pastoral destination peppered with small French villages that are nestled in the hills and tucked away in scenic bays along the St. Lawrence River, the Charlevoix is classic Quebec. Unquestionably, tourists who are smitten with the rural, history-rich, and laid-back ways of, say, Cape Breton or the New England States, will find the Charlevoix a little slice of heaven.

And for golfers seeking the finest there is, a multi-day stay at the Fairmont Le Manoir Richelieu, which sits tight on the river in scenic La Malbaie, is the obvious choice. The grand 120-year-old resort — which hosted the most powerful leaders in the world during the 2018 G7 Summit — boasts a 27-hole course with some of the most spectacular vistas in Canadian golf. The opening hole on the St. Laurent nine, a stunning par 4 that plunges down the rocky summit where the clubhouse is situated, is, without a doubt, the ultimate Kodak moment, the “postcard” you’ll want to post on all your social media platforms.

However, as golfers will soon find out, the Golf Club Le Manoir Richelieu is not just a one-trick pony. The remaining holes on the St. Laurent nine, the undisputed champ of the three nines, continues with the dramatic down-the-mountain theme before rising (thankfully, most of the elevation is regained via your cart!) to an excellent par-5 finisher.

Unquestionably, routing a course on rocky and rugged terrain with significant elevation change poses many challenges. But here, thanks to architect Darrell Huxham’s sensible approach in his redesign work (Herbert Strong was the original architect of Le Manoir Richelieu), there are no “extreme” holes; no brutal uphill slogs that are just “grit your teeth and bear it” holes.

While St. Laurent is the most picturesque nine, the other two – Richelieu and Tadoussac – can certainly hold their own. Drivable par-4s, pretty downhill par-3s, and heroic par-5s where big hitters can unleash “the beast,” are the norm. It’s exciting, tree-lined, parkland golf with “wow” moments interspersed throughout. In fact, the “wow” moment at the Golf Club Le Manoir Richelieu comes early. Very early. The 1.5 kilometer (nearly a mile) drive up the mountain from the cart staging area at the hotel to the perched clubhouse on the summit is unlike any other “start” in golf.

Speaking of driving, the winding rural roads that curl through the Charlevoix region are a delight to explore. And, not surprisingly, given the fact the region is peppered with farms, roadside cafés, orchards, and the like, the Charlevoix “Flavour Trail” is the best way to experience them. Although you won’t be able to visit all of the tasty stops along the trail in just one visit (there are more than 50 stops), you’ll certainly have an epicurean adventure that won’t disappoint. Although the trail does incorporate restaurants, craft breweries, cideries, and brewpubs, it’s the eclectic and organic farms, the tomato wineries (seriously), and the many gastronomic surprises along the way that really make the experience worthwhile.

On your way back to Quebec City, and to cap off your visit to the Charlevoix, a quick stop at Baie-St.Paul, the artistic hub of the region, will give you one last paragraph for your postcards. Baie-St. Paul, which also sits along the tidy shore of the St. Lawrence at the mouth of the Gouffre River, is chock full of art galleries, restaurants, chocolatiers, exquisite little cheese shops, and, well, you get the idea. True, bringing a good golf swing to Quebec is somewhat important. But bringing a good appetite is essential.