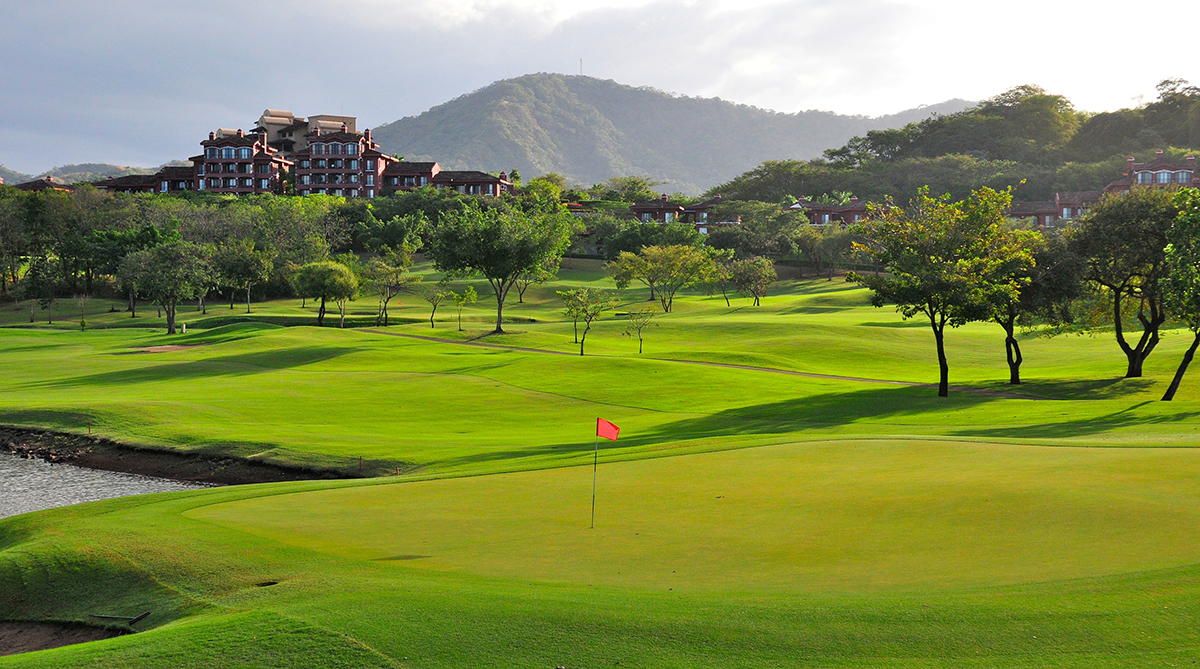 He saw me before I saw him. But then he had the edge — I was on his home turf, playing golf in Costa Rica. The biggest iguana I have ever seen sat motionless 25 yards to my left while I stood on the tee of the par-5 closing hole at Reserva Conchal Beach Resort, Golf & Spa.

If only I had mimicked the focus he exhibited while staring at me, my drive might have found the fairway. And that would have led to a better second. And maybe my approach would have landed on the green, rather than in a pond fronting the green (a shot that’s more uphill than you think). And then my scorecard might not have ended with a bogey.

Fortunately, by then I had embraced the country’s informal national motto : “Pura Vida,” or pure life. It’s only golf, after all.

The hole was a challenging ending to an enjoyable course in a country I knew little about prior to a trip there last year. I heard (but never actually saw) the famous howler monkeys singing their song from trees around the property, drank a new favorite beer (a lager called Imperial), fished in the Pacific thanks to Yellowfin Charters, rode a horse through the countryside and tasted the best fried chicken of my life. But more about that later. First, the golf.

Reserva Conchal has the only Robert Trent Jones II design in Central America, and it’s good enough to have hosted the PGA Tour Latinoamerica Costa Rica Classic the past two years. The inaugural tournament in 2017 — the country’s first PGA TOUR event in more than 30 years — was won by Jose Toledo of Guatemala, while Florida native Tyson Alexander eagled the fifth playoff hole to capture the title this past May.

Set on Costa Rica’s northwest coast in the Guanacaste Region, Reserva Conchal is an hour’s ride from the airport in Liberia (the country’s main airport, in the capital city of San Jose, is approximately five hours to the southeast). A variety of accommodations, ranging from villas, condos and vacation residences to the all-inclusive Westin Golf Resort & Spa Playa Conchal, are available. The latter comes with numerous themed restaurants (the Italian offerings at Faisanella were my favorite), multiple pools, fitness center, spa and beachfront access. Construction is also currently underway for a new W Costa Rica hotel expected to open late this year with 151 rooms and suites in multiple buildings.

Don’t be surprised to hear American accents down there either; the country is a favorite destination for retirees from the U.S. Approximately the size of West Virginia with a population of five million, Costa Rica has the highest literacy rate in Latin America. There’s no daylight savings time, the average temperature on the coast is 80 degrees and the Costa Rican colon (named after Christopher Columbus, who discovered Costa Rica in 1502) offers a good exchange rate.

Soccer remains the favorite sport in the country (the national team, which reached the World Cup quarterfinals in 2014, failed to advance out of their bracket in 2018) but the course at Reserva Conchal, built in 1996, goes a long way to making golf more visible.

“At that time there were no resorts in Costa Rica,” said Robert Trent Jones II, chairman and master architect at his namesake company. “It was known as an eco-tourism place, one of the first actually. It’s very peaceful, has no army, and a lovely climate. There’s fishing, golf, and friendly people.”

The layout he and his team created exhibits just the right degree of fun and challenge.

“One of the things I like most about the course is that it has a nice rhythm to it,” said Bruce Charlton, president and chief design officer for Robert Trent Jones II Golf Course Architects. “They gave us a very nice canvas to create the best golf holes. We were able to route the course in the way we wanted to.”

Unlike his father whose motto was easy bogeys and hard pars, Trent Jones II employs a different philosophy. “We’ve always used a ‘listen to the land’ golf architecture approach,” said Charlton, who noted the company’s design team first roamed the property on horseback. “That means listening to our clients and understanding who will be coming to play the course. You’re on vacation, so why not have some fun?”

Carlos Rojas Soto has been watching guests do just that since taking the job as director of golf at Reserva Conchal in 2007. His favorite hole is the fourth, a 592-yard par-5 that climbs uphill to a green that offers Pacific Ocean views. But it’s not the hardest, especially for the pros.

“That would be the second, a 442-yard par-4,” said Rojas Soto. “The landing area is very narrow with hazards on both sides of the fairway, and the green is protected by a Guanacaste Tree and two deep send traps.”

I’d be happy enough just playing the five par 3s myself, especially the trio on the back nine, which is topped off by the 210-yard 17th requiring a carry over water to a wide but somewhat shallow and well-bunkered green. Speaking of the Bermuda Tifdwarf greens, take careful note of where you are in relation in to the Pacific Ocean to read those properly.

Reserva Conchal was the first course in Costa Rica bestowed certification by Audubon International. In fact, Charlton returned in recent years to focus on water conservation concepts by reducing turf and helping enhance the irrigation system. Various bunkers throughout the course have also been worked on as well.

As for that fried chicken? First my group of travelers took a quick shuttle to a nearby ranch where Casagua Horse Tours, run by an ex-pat American from Michigan, provides horseback rides. After moving slowly and carefully through the countryside and into a local village, we dismounted at a no-frills, town hall-type building without a hint of any restaurant.

A promise of delicious fried chicken sent quizzical looks throughout our group. Here, we wondered? No way. While we waited, a cold Imperial beer hit the spot. Then paper plates full of the promised meal were placed on the wooden picnic tables. One bite was enough to know this was a promise fulfilled, even in the most unlikely of places.

There were smiles all around, and still more golf to come at Reserva Conchal. Pura Vida indeed!