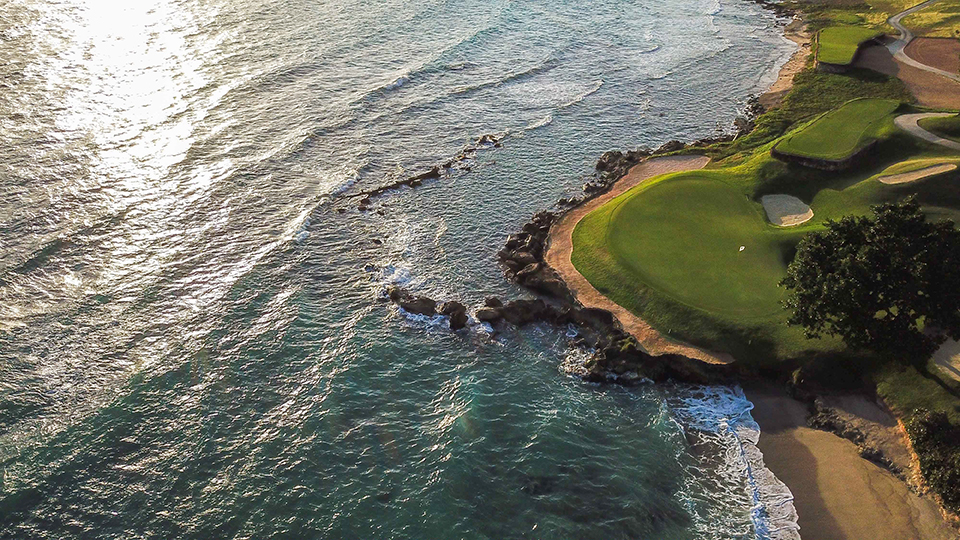 For years I’d heard the words, studied the photos, played those holes hard against the Caribbean in my head. Teeth of the Dog. And right on that dog’s heels, three more words in Spanish. Casa de Campo.

Cottage. As in getaway second home.

Sounded good to me.

Finally came the day I was there in the flesh, standing on the tee of the Dog’s exquisite par 3 fifth hole with a 9-iron in my hand, and yeah, that pup was barking up a storm — a storm of sun and surf and blessed late autumn heat, a far cry from the snowstorms back home.

I could get used to this.

I took a swing and my ball looked safe, safe, safe from a seawater death, then it caught up in the big tree guarding the green’s right side for a second or two, rattled around … and dropped in a narrow strip of rough between modern bunker and ancient rocky shore. Safe, after all. The Dog bit, but not hard enough to break the skin, or my scorecard.

That’s beauty and allure of Casa de Campo, the Dominican Republic’s original golf destination, a 7,000-acre development anchoring the province of Romana some 45 minutes from Punta Cana’s privately-owned international airport, on the island’s eastern point: There’s nothing hard about it, if by “hard” you mean harsh, or unwelcoming.

Sure, like any golf course designed by the great master Pete Dye, as all of Casa de Campo’s 81 holes are, Teeth of the Dog will snarl back at a bad shot on any hole, not just those exquisite seven along the sea. But get to know it a bit — with some help from an experienced forecaddie, preferably — and you’ll find it’s also a jovial and inviting breed, groomed to please and take up a permanent home in your heart.

That’s what all great golf courses do, and it’s a key ingredient in Dye’s enduring magic.

The fully inland Links Course next door exposes its friendly underbelly more readily — five or six strokes more friendly — while the 27 holes of the hilltop Dye Fore Course are a different breed of golf: one nine strung on a bluff overlooking the Chavón River, another tumbling toward the resort’s marina before turning back uphill, and a third, newer nine fittingly called Lagos, as in lakes. Lots of them. The private La Romana Country Club, where members and homeowners get their Dye fix, rounds out Casa de Campo’s tee-to-green bounty. Indeed, it’s one of the most impressive collections of golf holes in all of Latin America, not just the Caribbean.