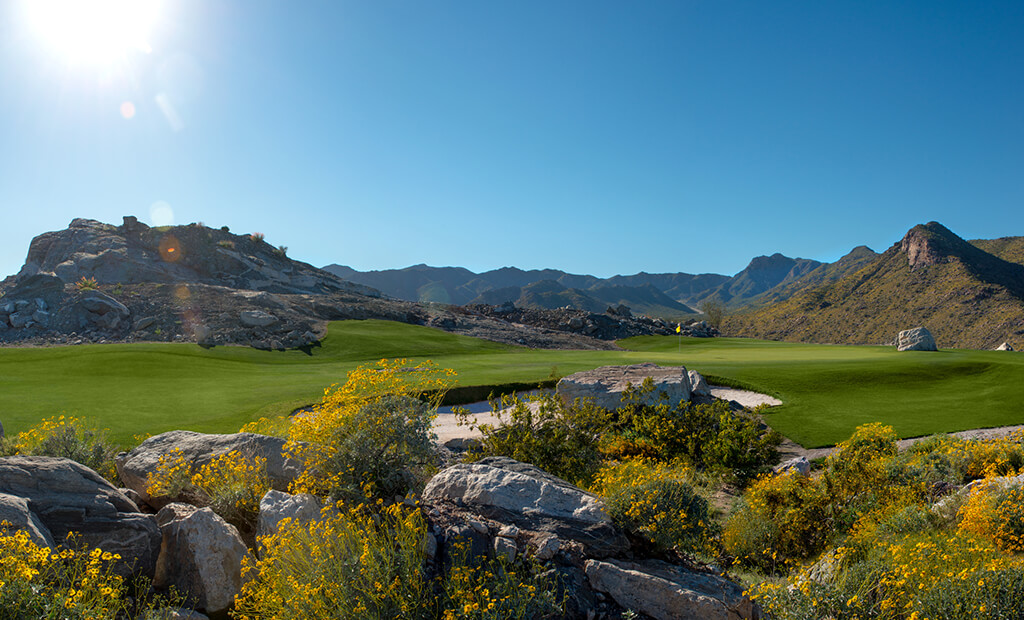 OK, you’ve made the leap and decided to do your next winter or spring desert golf jag in Phoenix’s West Valley, out beyond the big ol’ dome where the Cardinals play and the Super Bowl came around a few years back. Perhaps you’ve deciced to make the venerable Wigwam Resort your home base, played a round or two there, and you’re ready to check out the other green Sonoran jewels within easy driving distance.

Two tracks should be high on your list: The Golf Club of Estrella, centerpiece of a 20,000-acre development in Buckeye, a few miles south of I-10 and perhaps 35 minutes from the airport; and The Founders’ Course at Verrado, which began life as The Raven at Verrado on the western edge of Goodyear, tucked against the White Tank Mountains.

If you’ve got an extra day you can check out The Victory, Verrado’s brand new 18 designed by PGA Tour vet Tom Lehman (he partnered with John Fought on Founder’s).

Yes, someone named Nicklaus family can throttle back on the card-busting difficult design credo when he wants to, and Estrella, at least from the middle tees, is a welcome case in point. The Bear’s oldest son, Jackie, took the reins on this project, fashioning broad fairways, largely gentle greens and engaging but not daunting hole-to-hole variety out of a parcel that’s nowhere near dead flat but not overly hilly, either.

In other words, it’s contoured pretty much how God intended. Jackie found ways to leave cactus and brush-laden arroyos untouched even when you’ve got to play over them. He works a single saguaro into the target mix here and there, including on the mid-distance par 4 9th, the kind of hole where a judicious lay-up or gutsy big dog bash should get equal consideration depending on how the wind is blowing, or not blowing. No. 11 is a straightaway two-shotter pocked by more than a dozen bunkers, while back-to-back holes on the front nine — 5 and 6 — offer the course’s only water features.

If there’s a signature hole it’s No. 17, a classic desert par 3 playing slightly downhill over a stretch of native flora to a green that nudges up to a rocky hill. It begs for the sweetest 7-iron you can manage, and if you’re lucky enough to play it late in the day, get ready for a photo op of long shadows and even longer (as in hundred-mile) vistas of distant purple-painted peaks.

Such views are a running them at Estrella. By calling on Scottsdale-based Troon to run the day-to-day, Newland Communities kept their growing population of young families, empty nesters and snowbirds in mind, matching great conditioning with plenty of eye candy for a fun and relaxing round for residents and visitors alike — with drinks and grub awaiting at the Player’s Grill and Patio.

Stick around through sunset, feel the sharp temperature drop in the dry air, and nurse a nightcap around the firepit.

Out beyond the Goodyear cotton fields but with a clear view of Phoenix-Scottsdale glimmering to the east, Italian-themed Verrado has grown into one of the Valley of the Sun’s most popular high-end master-planned communities. It’s got the shops and the restaurants and the broad palm-lined boulevards, the heady mix of manmade luxury and stark natural beauty that, coupled with sweet winter weather, give the well-heeled gravitas of Palm Desert or La Quinta’s exclusive addresses.

Where Estrella comes a across as a comely lass, The Founder’s Course, which is open to the public but maintains a truly private club mien, has a fiery side to its personality thanks to its much more dramatic mountainous setting.

“Elevation change” inadequately describe what unfolds as the front nine moves along low ridges, in and out of box canyons and along rocky washes — slightly downhill at first, then inexorably uphill toward the back nine’s own amen corner, holes 12-14, which reaches its apogee on the 13th green after a sharply rising tee shot. Take in the view before heading back downhill, slowly and spectacularly, until reaching the all-over-water par-3 17th (a mere wedge from the middle tees) and the outstanding finisher, also over water on the approach, as much as a hybrid or as little as a short iron depending, of course, on the tee shot. Too far left and you have a wash plus the lake to clear; pull of the prescribed cut and you’ll have 120 or so yards in from a downhill lie, with one big distraction beyond the lake itself: The handsome terra cotta clubhouse, again offering a west-facing patio.

Chances are you’ll have a gallery looking on for that last pitch, so whatever you do, don’t three-jack — that cocktail will taste so much better after a hard-won par or better.

As for the new Victory Course, it’s young and still somewhat wild, sprawling across a very different piece of alluvial desert, seemingly rockier and definitely less mountainous. Lehman has always been a great iron player, and that’s where he puts the teeth in this track, demanding spot-on approaches to rangy multi-tiered greens to preserve any chance of a respectable number. A couple fun, almost linksy par 3s balance out the grit (one of them would fit right in if plopped on a Scottish strand). Overall, once it’s had a season to truly grow in and get comfortable in its own skin, it’ll move up to must-play level.