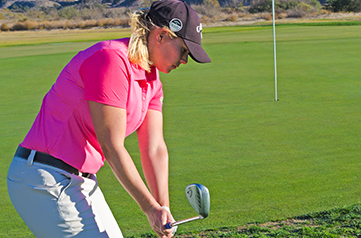 The Women’s PGA Cup was played for the first time this week, and the American team, including Golf Tips Top 25 Instructor Alison Curdt, took top honors. I plan to speak with Alison about the experience, but in the meantime, here’s the press release from the PGA of America detailing their bit win in Texas.

Team golf, whether conducted on a televised global stage or in the cozy confines of the Fazio Foothills of Austin, Texas, is the sport’s minute-by-minute drama series.

The inaugural Women’s PGA Cup had its share of compelling vignettes Saturday as a five-member United States team dug deep to hold off Canada and capture a sparkling silver trophy by four strokes, 671-675, at the Omni Barton Creek Resort & Spa.

The 54-hole competition, the first international event for women PGA Professionals, opened with the U.S. owning a 10-stroke advantage only to see that cushion trimmed twice to four. The day closed on a sun-splashed tableau of rolling terrain with Canada and the U.S. dueling on the Foothills’ renowned final four holes.

The Canadians had played the demanding stretch well all week – just a pair of bogeys. So, any celebration for the Americans was on hold until the final fivesome had finished.

“Coming down the stretch, these players fought so hard,” said U.S. Captain Suzy Whaley, the president of the PGA of America. “They came out a little slow, but hung in there. They did their jobs. Each one of them had to stay in the process and control only what they could control. They came out victorious, but today was a win for women’s golf.”

Great Britain & Ireland finished third at 698, followed by Australia (715) and Sweden (725). Brittany Kelly of Indianapolis, Indiana, was the anchor for the U.S., finishing the three days at 2-over-par 218 and earning her team’s collective water spray affection at the 18th green.

Canada was led by Christine Wong (222), while Alison Curdt of Reseda, California (223) provided the necessary “glue” to keep the U.S. in position to win a cup.

“We all needed we needed to stick to our game plan and forget the first two days,” said Kelly, the reigning Indiana Women’s Open Champion. “I had my moments. I always like to keep it interesting. I knew my teammates had my back. This was amazing to represent your country and play with best players in the country. I think that this will grow and would love to see more countries compete.”

On Saturday, Kelly (74), Curdt (74) and Ashley Grier of Springfield, Pennsylvania (75) were the three scorers counting in the final tabulations.

“Everybody counted this week, which was great to see,” said Whaley. “Every single player put up the numbers when they needed to do it.”

The unique format of fivesomes spread across the course kept the intensity level high, as the U.S. had a slow start on the front side.

“I wasn’t worried about making (a top-3 contribution), but was just trying to play well for the team, and be there in case they needed me,” said Grier, a PGA Assistant Professional at Overbrook Country Club in Bryn Mawr, Pennsylvania.

The U.S. Team included Seul-Ki Park of Billerica, Massachusetts, and reigning Women’s PGA Stroke Play Champion Joanna Coe of Lutherville-Timonium, Maryland. The PGA Assistant PGA Professional at Winchester (Massachusetts) Country Club, Park will be getting married next Sundayin Rowley, Massachusetts, had a 75, and Coe a 77.

“I told myself to stay patient,” said Park, who was keeping the U.S. margin afloat earlier in the day with a steady even-par round through 12 holes. “Today, I focused more on my tee shots and made sure that every single shot counts. Canada was really coming back, and we could feel the pressure.”

When asked to rate the week, Whaley gave it an “A-plus,” adding, “I couldn’t be prouder to have an inaugural Women’s PGA Cup and really proud to have the United States of America on the trophy.”

Canada’s Emma DeGroot, one of three playing Captains in the field, said that the Women’s PGA Cup “should inspire more people from individual countries.”

“Today, was really exciting,” said DeGroot, a resident of Hamilton, Ontario. “We checked the leaderboards as we went around and seeing it was getting closer and closer, and getting more and more nervous. I’m proud of the girls to have the fortitude that they did today. It was a shame we came up a few short, but I’m glad it was exciting and proud of the way we played.”

Curdt had seen a steady round going off the rails by a triple bogey 8 on the par-5 eighth, then get a “lucky bounce off the rocks” at No. 9 to save par. She birdied No. 10, but double bogeyed the par-4 11th hole.

“I snuck into the restroom near 11 and had a very hard talk with myself,” said Curdt. “I pulled my head out and said, ‘it isn’t about me, it’s about the team. You can do your job a little bit better.’

She bounced back with birdies on Nos. 12 and 15, and made a safe uphill pitch on the par-5 18th hole before finishing with a two-putt par. It was the insurance the U.S. needed.

“I have made self-statements in the past to pump myself up during a round,” said Curdt, “but never had I gone into a bathroom to look into the mirror. This was super important.”

Colbert’s home is in Perth, and she traveled 35 hours to arrive at the Women’s PGA Cup. Her first trip to the U.S. included a flight from Perth to Brisbane, Australia, then a seven-hour stint in the airport due to a connecting flight delay and that her bags were not checked through. “All in all, it has been a great experience,” she said.

The Women’s PGA Cup will be renewed in 2021, with the site to be announced.