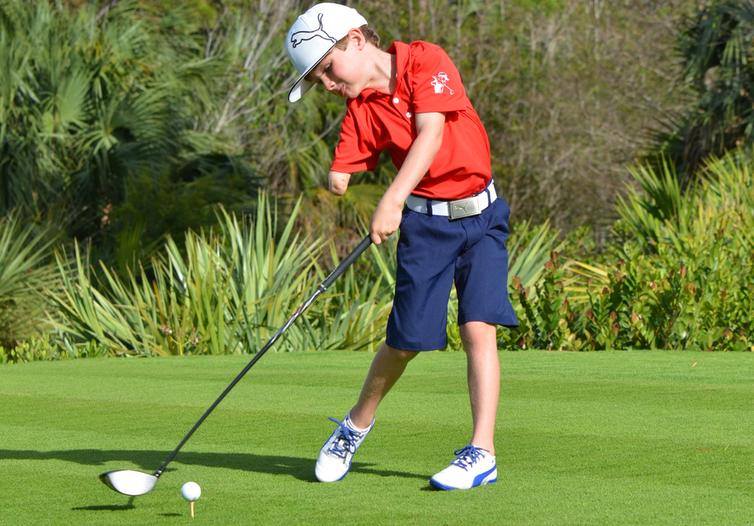 Kids like Tommy Morrissey, who was recently featured on NBC Nightly News, will give any golfer reason to just keep on going, no matter what.

Don’t tell this 8-year-old phenom, who just happened to be born without most of his right arm, that he can’t compete at the highest level. That’s his long-term goal and he’s sticking to it. By the looks of his swing, he’s on a winning track.

I’ve played with a few physically challenged golfers over the years, including a guy with one leg who, ironically, was slipping in a round while he was in town for a bowling tournament, of all things. And he struck the ball pretty well.

But this kid is different.

Though he’s never had a formal golf lesson, Tommy evidently figured out quickly that whether you’re playing one arm or two, the width of the golf swing is all-important for consistent ball striking and, therefore, greater distance.

And that all comes down to the lead arm. Since that’s the only lever Tommy has, he uses it to its full capacity, combining a wide arc with a full turn back and through to bust that ball out there farther than most kids can muster with two hands on the club.

His impressive motion also proves that, for right-handers, that trailing arm is just along for the ride, acting as a stabilizer more than anything.

Watching this video brings to mind this classic Golf Tips lesson from PGA teacher Karen Palacios-Jensen. Give it a look, then watch Tommy in action a few times, both in the video and on his Facebook page, and I’ll bet it’ll rub off on your game.

In the meantime, hat’s off to Tommy Morrissey. Hope we see him out there on Tour one day.