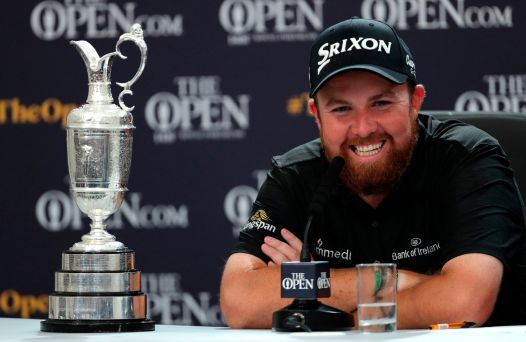 When my good friend and Golf Tips Top 25 Instructor Tom Patri sent me a Facebook message with this video taken by a guy mere feet away from Shane Lowry at a Guinness-soaked ceilidh celebration in Dublin, hours after he and his crew had pretty much drank Portrush dry, I thought to myself, “These Irish might know golf’s true heart better than anyone on earth.”

That includes Americans, and even the Scots.

The raw joy. The song, the laughter. The unbridled, triumphant grin of the Champion Golfer of the Year himself as he hoisted the Claret Jug with a jubilant punch as the chorus of “The Fields of Athenry,” a clearly well-loved Irish hymn, kicked in and the sweet sound of fiddles swelled.

“Now THAT’s how to celebrate a major win,” I wrote back. “Oh to be at that party! God bless the Irish.”

And that means ALL the Irish, on both sides of that jagged, 310-mile-long border between the Republic and what’s known as Ulster.

Lowry is from a small town in the center of the former, some 180 miles down winding roads from where he reached the pinnacle of the sport by six strokes over his closest pursuer, the lion-maned Englishman Tommy Fleetwood, and eight over American Tony Finau. Both those guys will grab a major trophy or two before they’re done, but right now, Lowry — who had one finger on the U.S. Open hardware in 2016, leading by four after three rounds, only to see Dustin Johnson wrest it away — stands alone as Eire’s golf hero, as its uniter of the moment.

Rory McIlroy has stood in that spot, and hoped to stand there again this very week, only wilt under the pressure in his first round. So have Padraig Harrington and Darren Clarke, who also missed the cut at Royal Portrush. But they all grabbed the Jug on English or Scot soil, while another Northern Irishman, Graeme McDowell, took his U.S. Open win hard against the Pacific, some six thousand miles away. McDowell carried the Ulster torch to the 72nd hole, then waited around to hug Lowry moments after his final putt drop, as did Harrington, now a close friend of Lowry’s.

Clearly this is different, more deeply felt in every corner of what has long been an island divided by politics and faith, sometimes violently so.

Turns out Shane Lowry is the perfect guy to close those stubborn gaps, if only for a year. He’s an Everyman of sorts who grew up learning the game on his home town’s humble track, who has experienced plenty of ups and downs throughout his decade-plus professional career. He sat in his car and wept after missing the cut at Carnoustie last year, his game in tatters. Though not at that level, we’ve all been there, on the verge of quitting.

But like us, and like so many people we know, Lowry has come back through hard work, some savvy strategic moves (including hiring Bo, his new caddy, who’s right there in the video, swigging and swinging at his boss’s feet), plenty of family support and a stick-with-him equipment sponsor in Srixon/Cleveland.

I’ve gotta believe he’s also been buoyed by the Irish public around him, from longtime friends to golf-crazy strangers. An outgoing and jovial fellow, he’s not the type to get insular and depend on hired trainers, head shrinkers image gurus, as so many “superstar” players do. Imagine some of them jumping on a pub table and belting out their victory bliss for all in earshot. Not gonna happen unless a PR agent OKs it first.

And that’s why I think Ireland “gets” the essence of golf, and why Lowry is the bearded, blue-eyed, round and proud avatar of that essence — the notion that this is a game created by a few shepherds for public consumption and enjoyment, to pass the time between toil and the next pub party.

Out among the regular greens fee-paying populace, on the munis and among the friendly, loose men’s and women’s clubs, is where golf gets its best energy, where its deepest and longest growth occurs. On my one trip to Ireland to date, I saw that energy in full, ancient-yet-vibrant force at places like Lahinch and Ballybunion. I saw it in Scotland, too, and in England and Wales, but in a somehow more subdued, buttoned-up fashion.

Of course I’ve felt it here at home, going way back to my days at Bishop Country Club, out in the middle of the Eastern California high desert, where my dad and his cronies took the game seriously — but not too seriously.

And I’ve teed it up with many a Shane Lowry type from coast to coast, people who clearly adore golf for its gut-stirring challenge and inherent beauty, but more so for its peerless capacity to bring people together and create friendships after just a hole or two, then cement them in the 19th hole afterward.

But those lovely Irish folks take that capacity to another level of communal, as the people of and visitors to Portrush showed us all week, and as the Champion Golfer showed us, too — smiling his way through each round, relishing his good fortune, sharing it generously, drinking it in.

Man, I wish I’d been there. We all do, and I. Thank God we’ll get another chance.