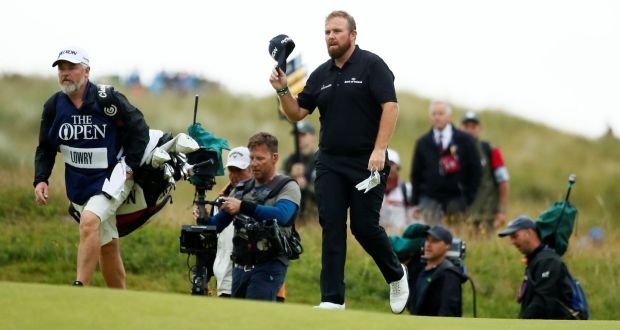 Well, Rory McIlroy almost made a liar of me during round two of the Open Championship, and I wish he had. But we still have Shane Lowry.

Rory thundered back, only to fall tantalizingly short. Still, following a brutal 79 with a nifty 65 should get some sort of recognition, and the hordes of fans at Royal Portrush complied with wave after thunderous wave of usually-reserved-for-Sunday cheers and shouts of “go Rors!” when another birdie putt dropped.

But he needed a 64. As much as any other stroke over an emotionally careening two days, that one little careless lip-out on the 16th hole on Thursday ended up costing the local hero a weekend ticket.

You could see that fact play across McIlroy’s face as he looked at his wayward second shot on the 18th hole even as the cheers rained down. He could do the math. There simply weren’t enough contenders left on the defenseless, almost wind-less links to move the cut number to plus two. Only a chip-in would do for him, and it didn’t go.

After his final par putt dropped, Rory doffed his cap to every corner of the packed grandstands, holding back tears. Fire and ice, sweet and sour, pick your cliché — in few other sports does the thin line between victory and defeat reveal itself so starkly. And the 30-year-old superstar soaked it in, all of it, with clear gratitude. So close. So far.

Another nod to Rory’s class: In his TV interview he threw his support behind current co-leader and his good friend from south of the border, Shane Lowry, who had a helluva chance to take this tournament by the throat after an electrifying front nine birdiefest. And then: “I look forward to coming back here and playing in the Open again someday.”

One man for whom that eventuality appears dim is Darren Clarke, one of the other two Ulstermen teeing it up at Portrush. After hitting the championship’s first shot in the slanting morning sun on Thursday and hanging around level par for the next 35 holes — what would have been a shot inside the cutline — the 2011 Champion Golfer of the Year triple-bogeyed the 36th, missing his short double-bogey attempt so badly from a mixture of age and barely-controlled rage and disappointment that I felt the agony from six thousand miles away. After taking in his own wave of appreciative cheers, Clarke quickly lumbered toward the tunnel leading out of the crucible, up the steps and over the bridge leading to the scorer’s hut, as if trying to escape his own shadow.

He already was. Golf is cruel.

Then there’s Graeme McDowell, who scraped his way to a one-over-par finish, and a berth on the weekend train. He too got emotional when speaking of his pride in his home country, which seized with gusto its chance at bringing the great Open back to Northern Ireland shores. They found the money, built the infrastructure, retooled the great course just so, and now they’re putting on one gorgeous show, with the very distinct possibility of a man from the neighboring Republic hoisting the Claret Jug on Irish soil, a few decades removed from the worst of the Troubles — with the dispiriting and potentially disastrous specter of a hard Brexit just a little over three months away.

For now, however, Ireland is united through the game of golf.

Certainly an American — other than trunk-slammers Tiger Woods, Phil Mickelson, U.S. Open champ Gary Woodland and others, but most certainly J.B. Holmes, back from the recent golf swing dead and tied for the lead — could very well bring the cup back across the pond. Brooks Koepka and a suddenly revived Jordan Spieth are hovering. Englishmen Tommy Fleetwood, Justin Rose and even the oft-disappointed Lee Westwood could get it done.

But at this moment, against even my own golf major pool picks, part of me is rooting for Lowry. The whole of Ireland, where once-divisive nationalism has been set aside for the good of the game and the human spirit, deserves it.