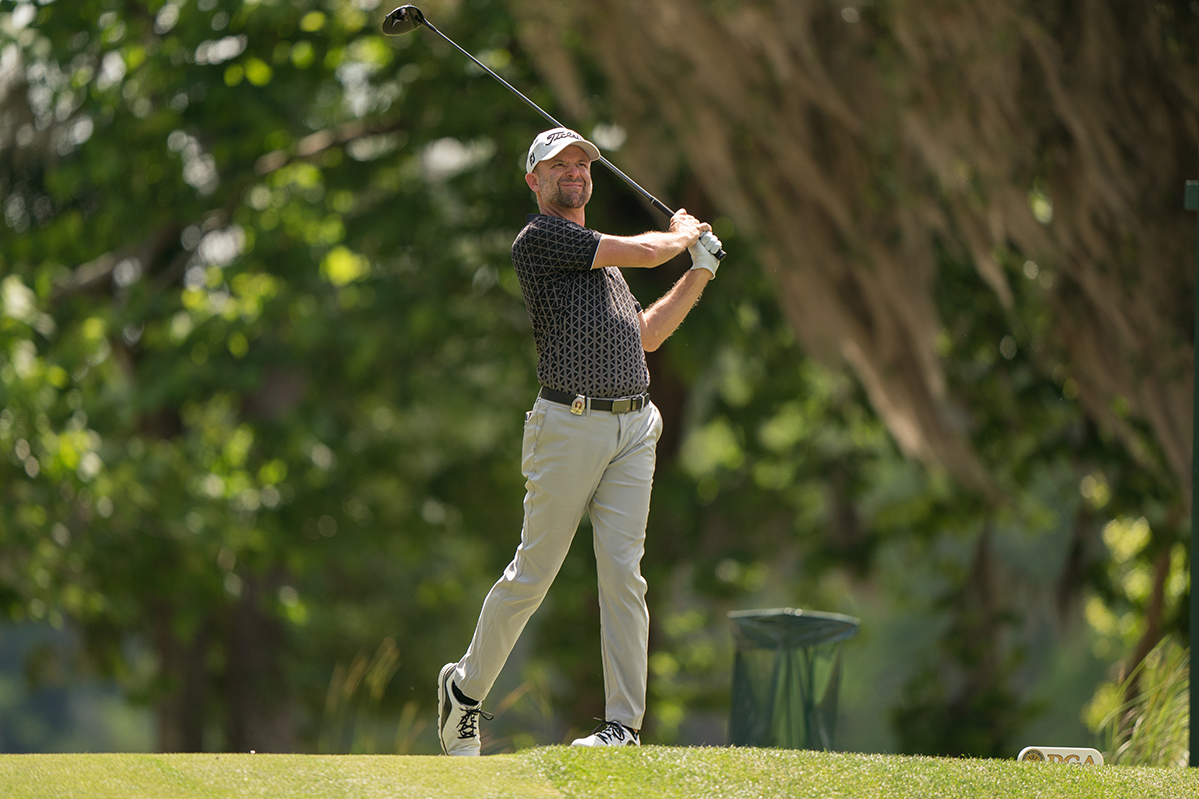 In honor of Golf Tips Top 25 Instructor Rob Labritz’s sixth trip to the PGA Championship this week, I’m honored and proud to share my semi-regular blog with him during tournament week. The New Yorker, who’s the Director of Golf at Glenarbor Golf Club in Pound Ridge, is gearing up for a “home game” in front of family and friends just 45 minutes from where he lives and works. Every day he’s in mix he’ll provide a PGA Championship diary of his experience on and around Bethpage Black. He reports here after shooting an opening round 75, five over par.

DAY FOUR: ROUND ONE

Overall, the score was 75, and I hit the ball great, but Bethpage just got the best of me score wise.

The 15th wasn’t even that bad though I  made double-bogey. I pulled a drive into the thick stuff, which happens out there, and actually had a pretty good recovery back into the fairway. Then I had an uphill shot and it went over the green, which you don’t want to do on that hole. Then I hit an excellent pitch to nine feet, and didn’t make the nine-footer.

It was kind of a bummer, but I came back with a birdie. Then on the par 3 [17th], I hit a great 4-iron, a nice, high cut in there, which hit the very top edge of the bunker. It was one of those times in a major championship where you hit a pretty good shot, and you get penalized. I hit a good bunker shot, but it was above the hole, six feet, which slid by the hole.

I don’t remember how many birdies or bogeys I had. I know I had a great birdie on the 12th hole, one of the longest holes on the course. Driver-3 wood to four feet. On the next hole, the par 5, I hit a little wedge in there, had a seven and half-footer left, and it did an 360 on me.

I came to the par 3 (14th), I had 167 yards into the wind. I saw the two other guys hit it short of the hole, so I just hit a three-quarter, knock-down 7-iron, which took one bounce and hit over the back edge of the green.

I hit it over a couple of greens, which you’re just not supposed to do. I made a few mistakes out there, which cost me a better round, considering the way I maneuvered my way around the golf course.

I started on 1, but a lot of guys started on the back nine, and  had to face hole 10 right away. You face 10, 11 and 12 right out of the gate, which I’m doing tomorrow. Hole 10 is a perfect example of how it went out there. I drove it a little to the right; I was trying to advance it down to about 100 yards, caught the stuff behind me — I was hitting 8-iron — and  pulled it way to the left, but still in the fairway, only about 70 yards. From there I hit a cut 6-iron to eight or nine feet for par. That was a good, solid save — kind of a “kick your butt into gear and let’s go.” As we were walking off, Beau [Hossler’s] caddie said, “that’s a shot and a half on the field.” That hole is just hard.

In fact, there’s not an easy hole out there.

I got up and down on 5 from the front bunker. Had a nice 12-footer on 6 for a birdie, which just hit the hole and lipped out. Then I missed a four-and-a-half-footer on 7 for a par after hitting driver-3 wood, then pitching up from the right rough. Again, it hit the edge and lipped out.

The greens, though, are flawless. They’re fast, rolling 13.

The guys are learning the course, and if we don’t get rain — right now the forecast is iffy — my God, it’ll just get better, especially with 68-70 degree temperatures. [The PGA of America] will be able to do anything they want with it.

It was awesome out there. I had a big crowd with me. Just so much fun.

Today after my round I went to the range after lunch, worked on my driver and 3-wood a little, my hybrids because I know they’ll be in play on a few holes. Then I worked on my short pitches from the nasty rough, and pitches from 60, 80,40 out of the fairway, then hit a ton of putts. So now I’m done, I’m hanging out with my family, who came in today. We’re going to have some dinner, maybe have a glass or two of wine.

We tee off late tomorrow so I’ll work out in the morning, get to the course early and feel how the energy is out there, the crowd, see how the course is playing, and go out and shoot a number.

From playing it today, a good round is doable. I just have to keep the ball in the fairway.

As for Brooks Koepka’s 63, was talking to a good friend of mine, Craig Thomas, the pro at Metropolis up here in the Met Section, who had the course record of 64, and there was a big spread about it in the literature we got as players. We laughed about that.

But this is a major, and that will happen. The dude can play. He’s full of confidence and is obviously fantastic player; he must be long and straight and make everything. I’ve never played with him. It’s impressive. That’s why I’m a club pro — I don’t want to go up against this guy.