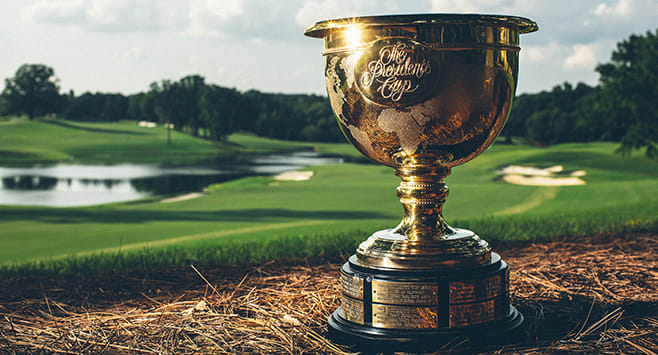 The Presidents Cup has always suffered second-rate status in comparison to its much older match-play cousin, the Ryder Cup. It’ll probably always be that way.

But thanks to several tasty story lines, this biennial edition, played out Dec. 12-15 (Dec. 11-14 in the U.S.) on the stately Sand Belt stretches of Royal Melbourne in southern Australia, will earn this stepchild a bit more street cred among golf fandom.

We’ve got Tiger Woods as player-captain.

We’ve got lovable Ernie Els looking to rally the International troops for their second victory in this event, the first dating way back in 1998, when Els himself was on the battlefield.

And, yes, we have the dustup around U.S. player Patrick Reed, who was caught red-wedged in a waste bunker at Tiger’s event in the Bahamas, earning a two-stroke penalty, etching another notch on his well-scarred tree of ignominy, and handing his team an unfortunate distraction.

So, we’ve got built-in drama to chew on and some damned fine players saddled up and ready to go. I’d say it’s definitely worth watching – in prime time for much of the continental U.S.

Also, when a big golf event rolls around, we like to poll our Top 25 Instructors for their thoughts, and predictions. Here goes:

I think the Americans will win. The Reed controversy certainly brings up drama leading into the rounds; however, when it comes to golf the U.S. players have such talent, grit and strength that I think they will persevere.

Tiger has been playing well and will certainly contribute importantly to the team.

I think the U.S. will lose to a revved-up International Team. The Australian galleries will be hyped up on the Americans – the reason being Patrick Reed and his obnoxious behavior after being caught cheating will not be tolerated by the golf public in a team event.

Tiger will do his best with handling the press, at which he is an expert, but it will not look good for the U.S. team.

Tiger will be a great playing captain, and his game looks solid. I think America will win, as the team is very deep.

As for Patrick Reed, I don’t think he should have been allowed on the plane. But, since he is there, while a distraction…I don’t think it hinders the great players on the USA team. Should be exciting, and don’t be shocked if Reed plays great.

I’m not sure how the Patrick Reed episode will affect the Presidents Cup, but it certainly seems like they’re covering for him.

Then The Golf Channel showed a video of him doing the same exact same thing in 2015, only one swipe, but nevertheless a swipe to clear sand from behind the ball. It’s a shame such a talented player has to resort to cheating. My opinion may seem harsh, but I think what he did was pretty harsh.

On paper, the American team seems much stronger. However, this is one of the great golf courses in the world, with extremely fast greens. Players who will play well here will need outstanding short games, great iron play and unbelievable putting. I’ll go with the Americans.

Tiger is the G.O.A.T. and has proven us all wrong many times. I think he will be able to play and manage the team.

Patrick Reed is motivated by the detractors and holds his own — while not distracting the team room.

In fact, Tiger won’t allow the team room distractions and will bring his match play game out of hiding since he won his amateur titles more than 20 years ago.

My prediction? A tightly contested President’s Cup is won by the U.S. by a narrow margin, perhaps even a single point. There will be no blowout, due to too much good talent in the other team room – it’s a team Ernie Els knows how to manage.

I think it will be a different Presidents Cup, with the cloud over Patrick Reed. That said, Tiger will be a great playing captain as he has found his game and has the respect of his players again.

In respect to the Patrick Reed incident in the Bahamas, and the American players and powers that are seemingly either giving him a pass or making light of a serious breach of the games integrity … I have to admit I have lost a bit of interest in the event. The Presidents Cup Team allowing a cheater to be part of the team just does not sit well with me.

I’m so biased for the Ryder Cup, so I’ll let the others weigh in. However, I will say that it would have been much better if Tiger refused to play on the team and selected another young gun, but he doesn’t work that way.

I predict victory for The International Team! The Patrick Reed “situation” is an unfortunate distraction for the U.S. team – and for the overall event.