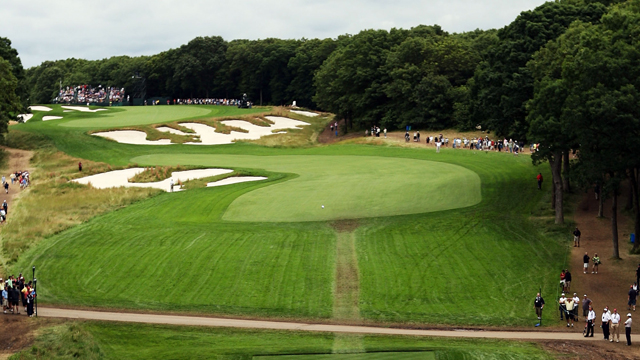 Steph Curry and Klay Thompson are known as “The Splash Brothers” due to their ability to bury three-pointer after three-pointer from long distance for the Golden State Warriors. As they burn opponents, ripping through the Western Conference on their way to their fifth straight NBA finals, two other athletes, and an old friend of mine, are exciting the golf world.

Last week, at the properly named Black Course at Bethpage State Park in Farmingdale, New York, the two beasts I refer to as The Smash Brothers battled mightily with another beast named Black as the rest of the golf world grabbed a ringside seat. Brooks Koepka emerged victorious over close friend and fellow Big Boy Bomber Dustin Johnson by two shots.

Some would say Black beat them both. Maybe it was a split decision.

Brooks started the final day with a seemingly bullet-proof game and a seven-shot lead. The entire golf media had all but handed Koepka the Wanamaker Trophy on Saturday night. Two things crossed my mind. One, golf is a funny game and I never believe ever that it’s over until in fact it’s over. Two, I grew up playing a lot of golf as a kid on the Black and although Brooks manhandled in on Thursday and Friday, I had a funny feeling that at some juncture over the weekend, Old Man Black was going to punch back. It was simply going to be a matter of who got the last punch in.

Suddenly, on the back nine on Sunday, as I suspected, a golf tournament broke out. Johnson had made a few timely birdies and the Black had Brooks against the ropes, pounding him senseless. To Brooks’ credit, he regained his legs just in the nick of time and remained standing until the final bell; what originally looked like an early round knockout turned out to be a final round TKO by a whisker.

If you go back and look at the final scoreboard of a major that boasts the strongest field in professional golf, only six of the greatest players in the world were able to better par for the entire event. In the final round, over 70 players were over par for the day.

I remember as a kid playing my old friend Black, long before the efforts of both New York State and The USGA agreed to restore the Tillinghast masterpiece. There was broken glass on greens and in bunkers, there were discarded car tires in the rough areas, there was an old abandoned burned-out car in what once upon a time was the old championship tee area on No. 9. There was trash everywhere and general course conditions were horrific. With all that, I remember saying to my peers as we walked up the hill to number 5 green, perhaps the hardest par 4 hole in the universe, “you know, if they ever put Black into condition you could play a U.S. Open here.” My friends laughed at me. I believe I was around 15 or 16.

Well I’m 60 now and my old friend Black has hosted two U.S. Opens, a PGA Championship, two Fed Ex playoff events, a ton of New York State Opens, and in 2024 it will host The Ryder Cup. I’m so proud of my old friend Black. He has made it through some very rough times and fought back. By the way, Brooks hung tough last weekend also. I have a funny feeling it will not be the last battle between three very talented beasts. I can’t wait to see the next fight between Black, Brooks, and DJ.

This commentary originally appeared in The Naples News

Tom Patri is the President and Founder of TPGOLF and a Golf Tips Top 25 Instructor. He is a former Met PGA Teacher of the Year as well as a former South Florida PGA Teacher of the Year. He teaches at Esplanade in Naples, Florida from November through April and is Director of Instruction at The Hawthorns Golf and Country Club in Fishers, Indiana, May through October. Reach him at tpatri@mindspring.com or (239) 404-7790.