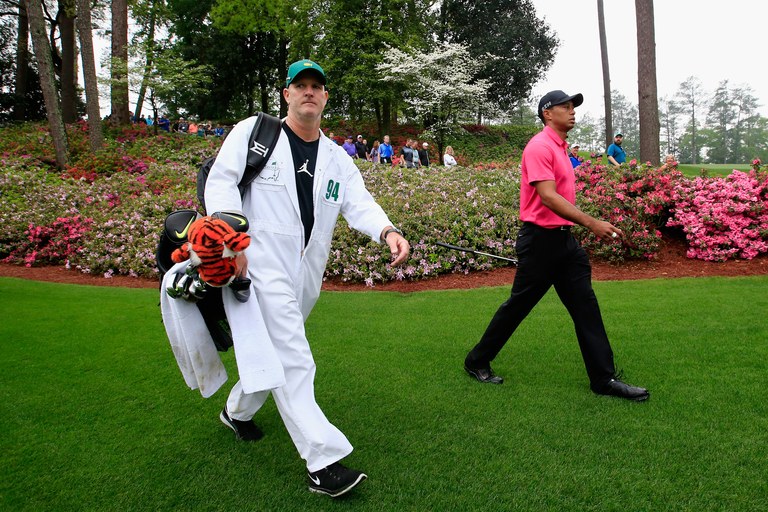 You’ve gotta hand it to longtime PGA Tour caddie Joe LaCava for standing by his man. When Tiger Woods decided to roll the dice on a third major back surgery in 2017 — the dreaded “fusion” move that has truncated many an athletic career — the former bag man for Freddie Couples (who’s had a few back issues himself) and Dustin Johnson didn’t seek out another employer.

He waited. He supported. He hoped.

He knew who he was dealing with.

And now look at him: Basking alongside Woods in the glow of the most electrifying Masters in years, perhaps ever.

But this was different, of course. This was The Comeback painted on the largest, richest canvas in golf, and LaCava was a huge part of it.

Of course he was. There’s much more to a Tour caddie than what the old trope “show up, keep up and shut up” connotes.

“How much credit do I give you?” Christopher “Mad Dog” Russo asked LaCava during this XM Radio interview on Monday. “Did you talk him out of something, or into something, that worked out?”

“Not really,” replied LaCava, who maintained his trademark stone-faced visage throughout Tiger’s Masters performance until that final putt dropped. His smile outshone his bald head as his boss gave him a huge hug and a “we’re all the way back, dude!” high five as a thunderous crowed ringing Augusta National’s 18th green did their best to share in the embrace. “I certainly don’t want to take any credit, he hits the shots.”

Still, LaCava pointed to one key moment on Sunday’s front nine where he steered Tiger away from the big stick and toward a safer club.

“Talking about the new [50 yard longer] fifth hole, for three straight days it had been his bugaboo. We’d been making fives on that hole. “On Saturday he pulled the driver into the bunker [again], trying to hit a little slider. He said, ‘I’ve got to trust my instincts more.’ I said, ‘What do you mean by that?’ ‘I feel like I should hit 3-wood.’ I said, ‘Well, trust your instincts.’”

“So of course we get there on Sunday, and he’s got this hands on Frank [his famed driver head cover], and I said, ‘What are you doing?’ He said, ‘What do you mean?’ I said, ‘You talked about hitting 3-wood yesterday, let’s hit 3-wood and stick to the game plan.’ And of course he piped it right down the middle and hit the green in two.”

Tiger went on to make bogey anyway with a 3-putt, but LaCava knows they made the right choice there.

“You can’t be afraid to make decisions. I’m not going to sit here and tell you I’m always right, I make mistakes, but Tiger doesn’t come back at me and get mad. He knows if it’s the wrong club, so he doesn’t have to get all upset about it.

“That’s the deal with me, and my wife will tell you the same thing: I always think I’m right, and I’m going to tell him what I’m thinking.”

Before the round even started, on the first tee, LaCava took Tiger aside, telling him to be “loose but intense.” In other words, keep the emotions in check. That’s what Woods did; even when he later notched another bogey to then leader Francesco Molinari’s birdie, putting him three shots back, Tiger remembered those words, giving himself a pep talk during a bathroom break. Then came the back nine, the play-it-safe 12th hole shot, the 16th hole near-ace, the glory.

So what can we mortals — who don’t usually have a Joe Lacava around to push us toward a certain club or keep us on the emotional rails — learn from this?

It’s taken me 45 years of golf to learn, but for me, I know I must be my own caddie every time I go out there. When I step on the tee of a risk-reward par 5, I’ve got to tell myself to leave the big dog in the kennel and lay up with a smart club, as in this great Golf Tips lesson.

And when I’m fortunate enough to have an experienced looper along for the ride, by God, I’ve got to set my ego aside and take his or her advice.

One more thing: We’re not playing in the Masters. No pressure needed or warranted, even if we have a few bucks on the line. So why do we load up on pressure anyway? Why do we do that do ourselves?

So is Tiger, as we well know.

Lacava certainly knows that, too, so let him, again, have the last word: