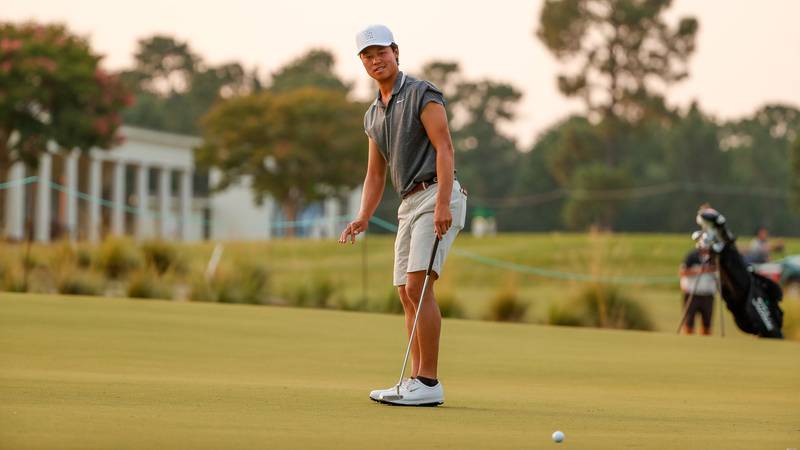 After two rounds of the 199th U.S. Amateur at Pinehurst Resort, Brandon Wu is the latest guy to show that there must be some special stuff in the water up San Francisco Bay Area way.

His counterpart from across the bay, Collin Morikawa, was a four-time All-American for Cal and has already turned pro, winning in only his sixth PGA Tour start at the Barracuda Championship and now gearing up for the second round of the FedEx Cup playoffs.

Morrikawa is my new favorite young stud on Tour, as anybody who reads this space well knows.

Now I’ve got Wu to endow with a few “wows.” One of the standouts from Stanford’s newly crowned NCAA Championship team, the Scarsdale, New York, native also made a strong showing at last week’s Pan American games and tied Morrikawa for 35th place at this year’s U.S. Open at Pebble Beach. Then he showed up here to scorch the new Pinehurst No. 4 for a course record-matching 65 on Monday. On Tuesday he managed a 72 on vaunted No. 2 on before thunderstorms halted play for a while.

As I write this late Tuesday afternoon, Wu is a couple shots back. That could change as darkness descends and the afternoon wave of stroke-play competitors straggle in, but his performance is impressive so far, especially as it’s on the heels of a long, late Sunday flight out of Lima, Peru, where the Pan Am Games played out.

On Wednesday, the final field of 64 switches to match play, with the finals on Sunday on No. 2.

Will Wu make it that far? I wouldn’t count him out.

My Golf Tips colleague Dave Honeywell, who recently relocated to the Pinehurst area — both his sons are crazy about golf — took in some of the action and Pinehurst and got a few minutes with Wu on Tuesday morning.

“Brandon was even through 13 [during Monday’s round], then threw up three birds and an eagle in the next four holes to tie the course record of 65,” Dave told me via text. “He played here about a month ago and everything is much firmer now, fairways and greens. Makes the course play shorter as the ball gets more roll, but the greens are all the quicker too.”

I’ve played both these courses. No. 2 is still the beast it’s always been — Bill Coore and Ben Crenshaw kept Donald Ross’s brilliant greens intact when they remodeled it about a decade ago — and Gil Hanse’s No. 4, while friendlier, has its moments. It’s definitely national championship worthy, and I, for one, am thrilled it’s part of the U.S. Am mix less than a year after opening. I’m sure Wu is, too — by any measure, 65 on that sandy, rollicking new track is smokin’.

Makes me wish I was there to see it all in person, but I’m thankful Dave is there to send me some tidbits here and there, even as his younger son competes in a big AJGA event this weekend.

Whatever. The U.S. Open is the mack daddy of American championship golf, and rightly so, but the Amateur is where that event’s eventual champions are forged.

Last year it was Viktor Hovland. This year? Keep an eye on Wu.