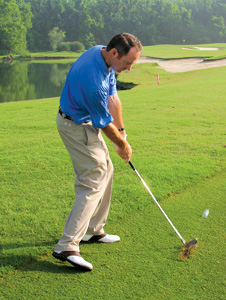 What’s your goal in the game of golf?_Ê If it’s primarily to enjoy the outdoors or spend time with friends and family on the links, then you probably don’t need a lot of instruction. For most of us who love the game, however, the challenge of playing well and competing is a major part of why we’re hooked. Of course, having a fun day out of the office and in the open air is part of it, but if most golfers were really honest, they’d admit that shooting the lowest score possible is the ultimate goal. And there are so many ways to improve your scores that there’s really no excuse for not getting better. You probably scan the pages of Golf Tips every month looking for new techniques that will help you hit longer drives and sink more putts, and that’s a good thing. We all need to make sure our mechanics are as sound as they can be as we pursue the game of golf. But what if your technique is improving but your scores seem to stay the same? With today’s new equipment, many of you are probably hitting the ball longer than ever but mysteriously maintaining the same handicap. Why? Because you’re not using your head out there. Strategy is a major part of golf, regardless of your skill level, and improving how you think your way around the course is the easiest way to improve your scores. So use your head, and read on.

Wrong!
When deciding the appropriate line of play off of the tee, remember to favor the odds._Ê Here you can see that I’ve taken an optimistic line._Ê If I hit a perfect shot, I can avoid the water left and cut off some distance, but if I pull my drive at all I bring the water hazard into play and assure myself of a high score on the hole._Ê Making decisions on the course that require perfect execution is rarely the recipe for low scores, particularly if you don’t get to practice every day.

Right On!
Play more down the right hand side of the fairway and you’re playing the percentages!_Ê Here you can see if I miss my target right or left I’m still in play and can move on to the next shot without having to pay for a penalty stroke of some kind. No one hits the ball perfectly on every shot! Allow for some margin of error with your shots by taking a smart line off the tee and the confidence this builds will allow you to start making more aggressive swings.

Use More Loft
Because backspin fights off sidespin, choose a club with more loft off the tee. The more loft you have, the less your ball will curve left and right, allowing you to hit more fairways. Notice here I have 10.5 degrees of loft. If you’re not a really great driver, this is probably for you.

Think Twice, Tin Cup
When given the opportunity to choose between an aggressive, go for it play or laying back and playing it safe, most amateurs inevitably choose the aggressive play. And I have to say, when you pull the shot off, it does feel really good! But my advice is to play within yourself, as the saying goes, at least if you’re really interested in shooting lower scores. Be realistic about your capabilities and always keep the percentages in mind. If your true goal is to shoot the lowest score possible, ask yourself how many times out of ten you might expect to successfully execute a shot before attempting it. If the real answer is, not too many, then think twice before trying it. Going for a shot like this one, which requires a long carry over sand and water, could definitely cost you in the end.

Low-Risk Shot
Make the decision to play a low-risk shot._Ê In this scenario, many players would choose to hit the ball directly at the green regardless of the consequences or the realistic chances of pulling it off. If, when you are honest with yourself, the percentages_Ê don’t seem to be in your favor, be smart and opt for the safer play._Ê In this situation, aiming to the right and taking a club that would land short of the green, but in a safe area was the right decision and will generally lead to a lower score on the hole._Ê It’s up to you to decide what your ultimate goal is, but if it’s saving strokes, then you have only one choice and that’s to use your head!

Six-Foot Drill
How many putts you sink inside of six feet plays a large role in how you score on a given day! Practice hitting six-foot putts from four sides of the cup, and set a specific goal of how many you want to make._Ê Stretch yourself by picking a number that seems a bit out of reach and go for it._Ê For mid-handicappers, I suggest a target of four or five in a row.

Go For The Center Of The Green
Just because you can see the flagstick doesn’t mean you have to aim at it! I’ve often wondered how much lower golfers would shoot if there weren’t flags on the greens that let us know where the hole was located. My belief is that the majority of us would shoot much lower! I’ve even tried this with some of my students during our playing lessons. Before we went out on the course, I removed several flags to see where they would aim, and predictably, they almost always shot for the middle of the green. Make this your target, and your scores will drop quickly.

20-Foot Drill
Place a tee about three feet behind the hole and then putt balls from 20 feet, trying to get as many in a row to finish between the front edge of the cup and the tee in back of the hole._Ê For my better players we use 10 in a row as the target. Find a realistic number that works for you, but be sure to make it at least five or six. I can’t tell you how many amateurs I see wasting a significant number of strokes on the green due to poor distance control and three-putting. Practice from 20-feet and you should be able to get down in two most of the time.
_Ê
GT Senior Instruction Editor Chuck Winstead teaches at the University Club in Baton Rouge, La.
_Ê
_Ê

One thought on “Use Your Head”