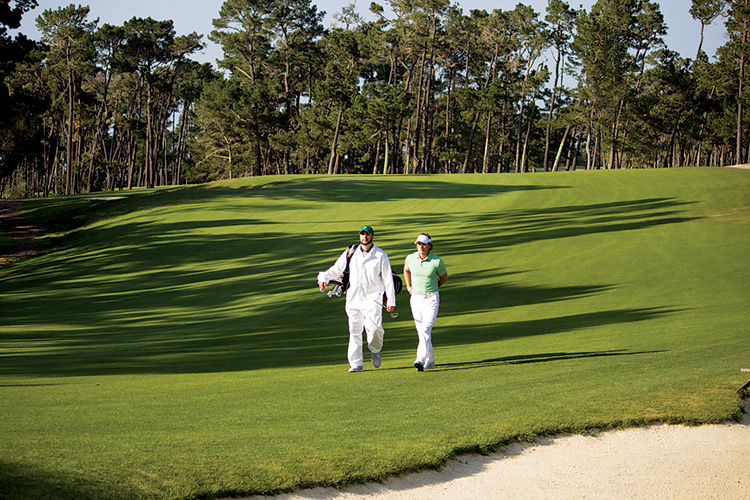 Editor’s Note: In honor of The Masters, first major of the year, Golf Tips presents a popular piece from 2015 featuring PGA teaching pro Jeff Ritter. He turns Poppy Hills in Pebble Beach, California, into a West Coast version of Augusta National to show what shots and strategy it takes to win the world’s greatest golf event. Enjoy.

No tournament is quite like the Masters. The only Major played each year on the same hallowed grounds, golf fans across the globe feel a special connection with Augusta. Like many people, I'll never forget watching Jack Nicklaus win the Masters in 1986. I had never felt so inspired rooting for someone. As perhaps the greatest tournament in the history of golf unfolded, I recall lying in front of the television, pounding my fist into the carpet with excitement.

Years later, I had the opportunity to attend my first Masters tournament. I remember walking through the gate, gazing down Magnolia Lane and once again recalling the feelings I had watching in 1986. It was almost surreal as I raced about the course, savoring every inch of the landscape. I've since had the good fortune of attending most years and each time experience a childlike enthusiasm that's undeniably connected only to Augusta.

Now residing in Pebble Beach, I operate out of the newly renovated Poppy Hills Golf Course. Poppy Hills' tall Monterey pines, powdery white sand bunkers and perfectly manicured fairways have made players feel a "touch" of Augusta during each round. Home to the Champions Tour's Nature Valley First Tee Open, Davis Love III was recently quoted as saying, "At times, you're like, Wow, it looks like Augusta!" With that information in hand, I asked the team at Golf Tips if we could have a little fun with a Masters-themed story shot right in my backyard.

The Masters is special and challenging for many reasons. Following is a series of shots and strategies players will need to employ to come out on top at golf's greatest Major!

Augusta National presents players with a number of challenging shots competitors will train for well in advance. One particular shot needed on holes such as the par-5 13th is a high, booming draw off the tee (right-handed golfers). Missing left into the water or right into the pine straw results in sure lost shots to the field, whereas a deep, perfectly placed drive provides easy access for a run at birdie or eagle. 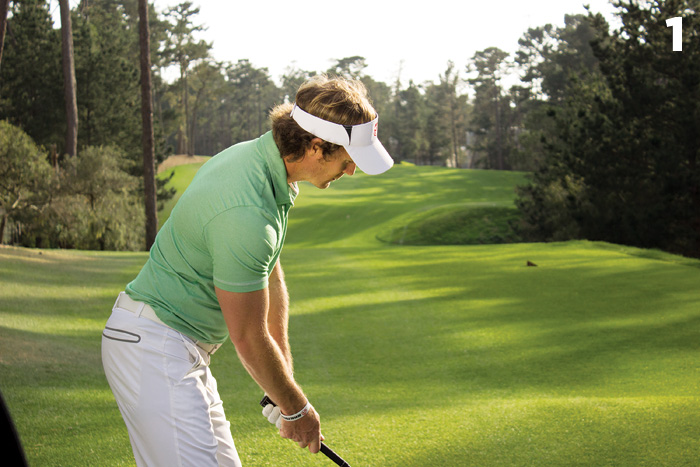 The first key to smashing a high-bombing bend comes from a simple adjustment in vision. Curvature is a product of swing path. A ball that curves back to the left needs a swing path directed "in to out" or, in this case, off to the right. To set the stage, tilt your head away from the target, while rotating your eyeline to look well down the right-hand side of the fairway (right-handed golfers). As long as you deliver the clubface a little closed to your rightward swing path, the ball will bend back to the left with ease. This simple adjustment in perspective will go a long way toward producing your desired swing shape and ballflight. 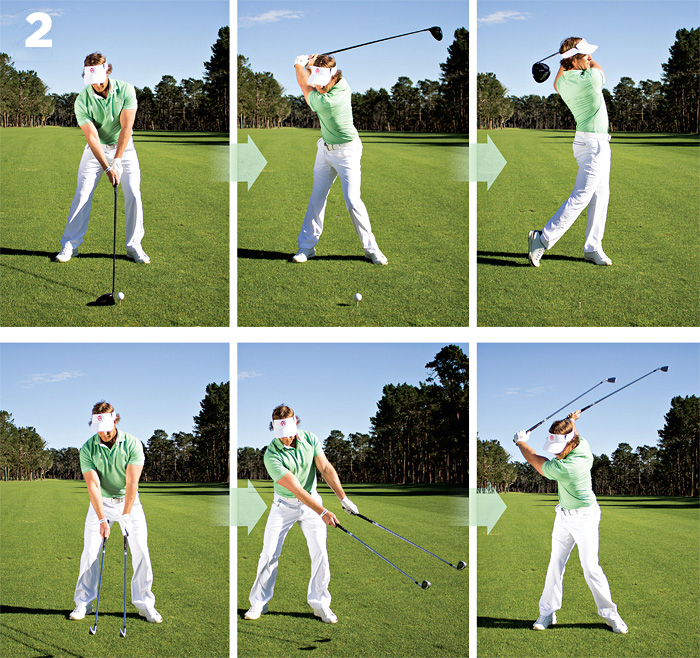 To hammer it off the tee, you need to create a wide, powerful swing arc. A great way to develop the feel of both power and control is with a two-club swinging drill. Grab two clubs and assume your setup position. Space the shafts by about 6 to 8 inches, while hovering the clubheads above the turf. To start the movement, swing the shafts one-quarter way into the followthrough. As you swing away from the target, imagine a wide, consistent arc, as if the clubheads were tracing the edge of a massive, overinflated basketball. As you reach the top, the shafts should maintain an even separation as your hands are pushed well away from your back shoulder. This is an awesome drill that helps develop a smooth start and big stretch for more firepower off the tee. 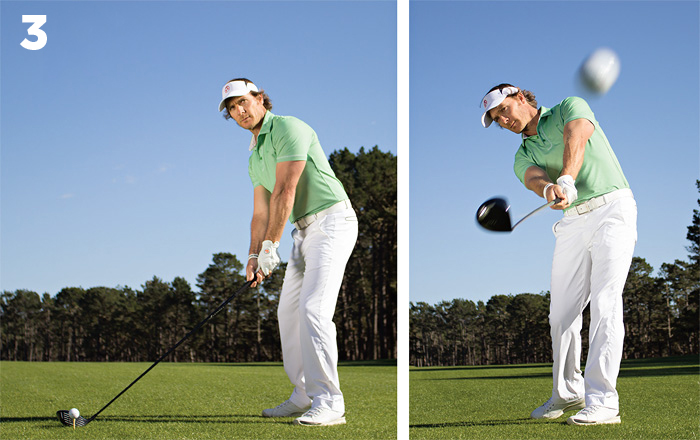 Radar devices such as TrackMan and FlightScope have shown that most players will maximize driving proficiency by hitting a few degrees "up" on the ball at contact. To infuse this benefit into your driving, tee your ball a little higher than normal, while making sure it's positioned well forward in your stance, as well. From here, adopt a mind-set of striking both "up" and "out." Hitting "up" delivers optimal launch characteristics for max distance, while swinging "out" ensures a swing path conducive to producing the right-to-left ballflight you're looking for.

King Of The Hill: Slope Secrets

One of the more surprising characteristics of Augusta is how terrain is so undulating. While beautiful to the eye, television simply doesn't showcase that Augusta National is one of the most up-and-down pieces of earth players will face all year. To slip on the Green Jacket, the winner will have to navigate the slopes with precision over four challenging rounds. 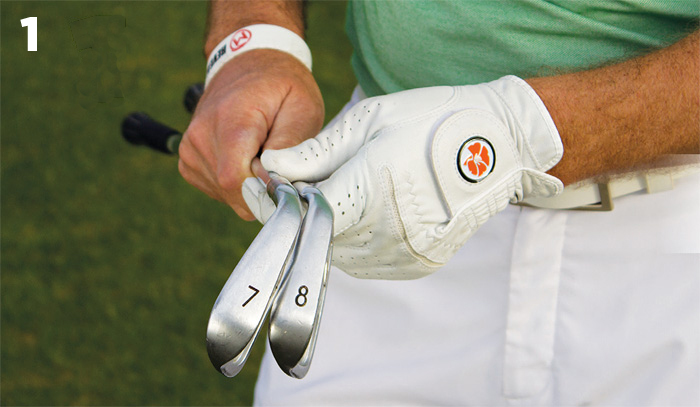 Success from uneven lies is all about delivering quality contact. With the slope working against your ability to play your normal game, it's imperative to trade power for predictability. When faced with awkward lies, consider clubbing up and smoothing things out. You'll find this simple adjustment in strategy and mind-set will dramatically increase your prospects for producing a clean hit. 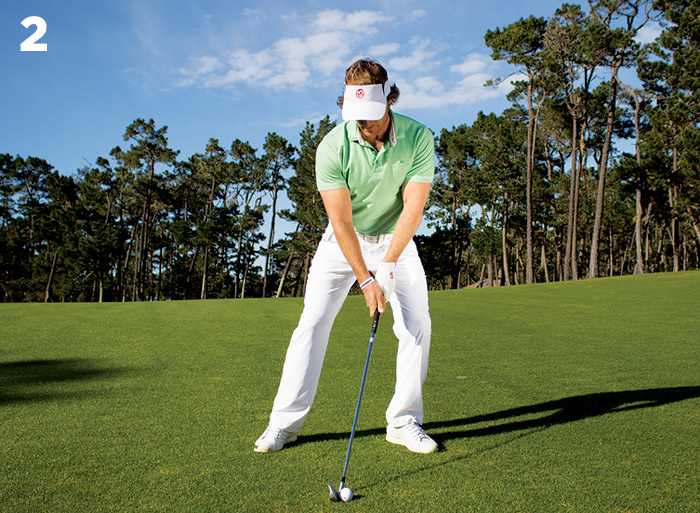 To play well from uneven lies, you need to establish a stable base. In this case, I'm standing considerably wider than I normally would play a 7-iron from level ground. Without balance, success is all but impossible. Forget any rules you have in your head about stance width and instead do what it takes to feel solid and grounded. 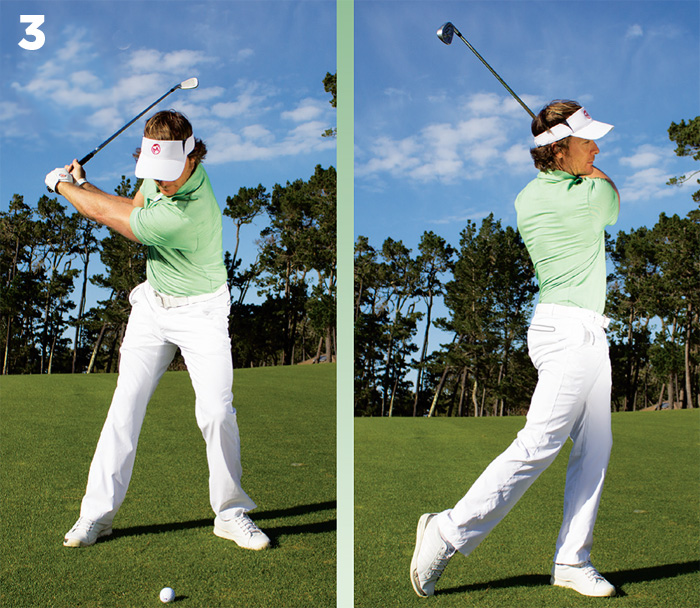 Try and go big, and chances are, your attempt will end in disaster. Huge windups and big finishes are notorious for adversely affecting posture on these tricky shots. Lose your incline to the slope, and you'll be hitting toppers across the ground, or worse. When faced with an uneven lie, focus on staying in control. That means adopting a three-quarter-swing attitude both back and through. By swinging more within yourself, you'll be in prime position to hit your best shots more often.

Make a trip to the Masters, and you'll quickly understand that "hitting greens" doesn't add up to what you may think. Whereas most courses play favorably for balls that hit the putting surface, Augusta demands that shots hit a spot no larger than a bedsheet to have any chance at working to the players' advantage.

Look at poor iron players, and you'll often find "short arm syndrome" throughout the golf swing. A great way to feel and maintain a reasonable swing radius is to practice hitting shots with a ball hugged between your elbows. Find a ball about the size of a grapefruit. Having one that can "squeeze" a little will help keep the ball secure. With a short or mid-iron, practice making half- to three-quarter-length swings. Try keeping consistent pressure on the ball throughout the swing. These should be controlled shots at a comfortable pace, with the goal being to learn to create a cleaner and more consistent strike. 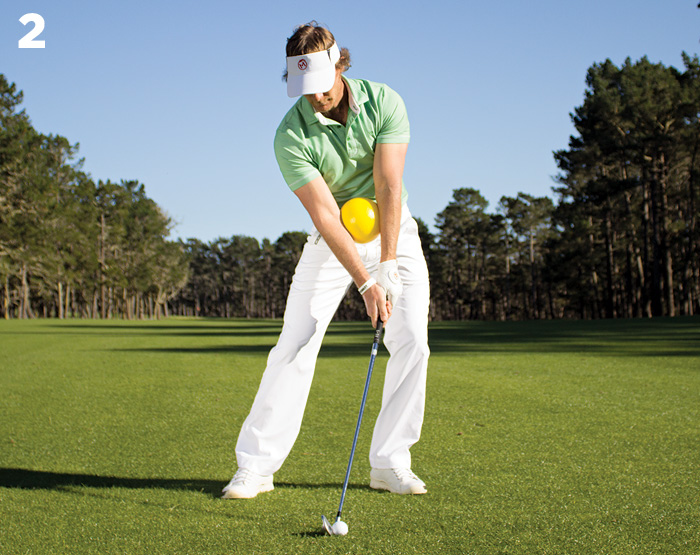 To hit laser-perfect irons, you have to create a slightly downward strike that takes loft away from the face. A great way to "feel" this action is to think of extending the length of your divot. Imagining a longer "low point" helps facilitate a strong downswing move, where the weight is firmly on the front foot. As the weight shifts forward and the arms stay long (see the tip above), you'll effectively strengthen the club's playability, leading to more crisp and powerful shots.

Of all the unique attributes that make up the Masters, perhaps the most noticeable is the need for advanced skill on the greens. Below are two simple tips this year's winner will employ that can benefit you, as well. 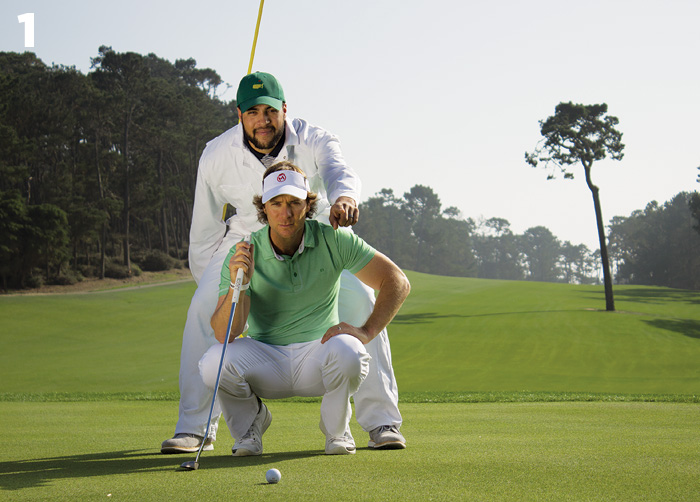 No place requires more teamwork than Augusta National. Challenging contours that require a little hometown knowledge are one reason first-timers rarely win at Augusta. No one knew Augusta better than Jack Nicklaus. Upon winning his sixth Green Jacket, Nicklaus was asked about one putt, in particular, he played correctly when many others in the field did not. Jack's reply: "I had that same putt 15 years ago and knew it didn't break the way it looks." Great putting is both skill and knowledge. Try creating a mental log of oddities you find on the greens or elsewhere at your home course. At some point, you'll be sure to pick up a shot or two.

What's scarier than a fast downhiller under pressure? Contestants will be faced with plenty of these tricky sliders, and nothing is more nerve-wracking than having to make one to win a Green Jacket. At times, I like to divide putts into mind-sets of offense and defense. In an offensive situation, like a short uphill putt, I'll play less break while driving the ball with a little extra steam to the hole. With the slope as a natural protector, it's easy to play aggressive and still not have the ball shoot too far past the cup.

The slick downhill slider needs the opposite play. Maximize your break and opt for a more delicate roll. Research shows that most golfers under-read putts by as much as 75%. Drastically increase your read and let the slope do the work. You'll find more putts hitting bottom or, at worst, finishing within easy tap-in range.

Close The Deal: Mind-Set Strategy For Coming Out On Top

Jack Nicklaus once recited Shakespeare in saying, "Some people are born to be great. Some people learn to be great, and others have greatness thrust upon them." One can only guess who the winner will be. It's the Masters, so expect something amazing to happen! 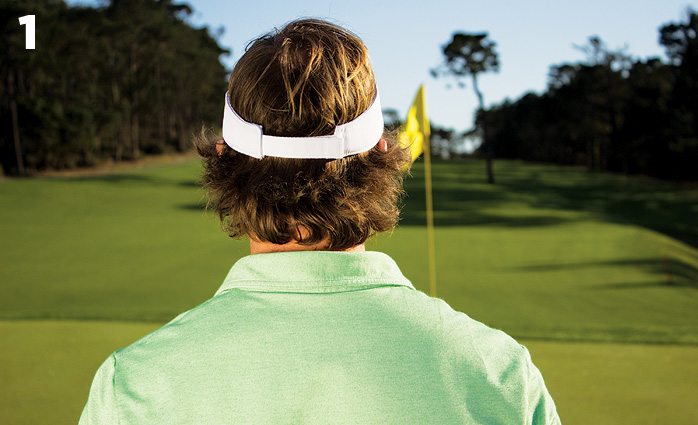 No tournament is more exciting than the Masters. Nearly every year a number of competitors are within reach, only to falter down the stretch. With the weight of a life-changing victory on their shoulders, it's easy for players to mentally drift out of the present or become emotionally influenced by potentially negative outcomes. To finish strong to the clubhouse, it's imperative you allow yourself to take in the entire experience. Trying to block out an onlooking crowd or daunting water hazard will only increase your attachment to them. Instead, survey the landscape and enjoy the moment. Acknowledge out of bounds, slopes and hazards not as round-killers, but rather as "markers" that simply show the proper way to go. Once you have all the info, focus on what you want and swing away as if success was a given. 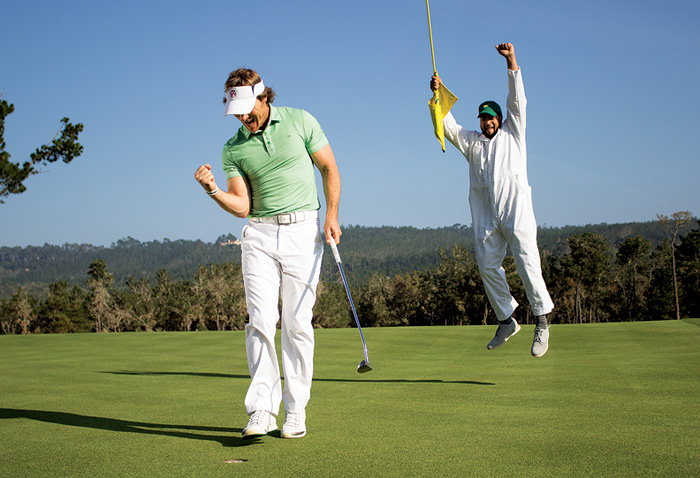 From Tiger's dominating 1997 victory to Larry Mize's improbable chip-in to best Greg Norman, winning the Masters is a life-changing event. Although all players in the field are talented, the one who most embraces "deservedness" will most confidently step into their own brilliance at Augusta.