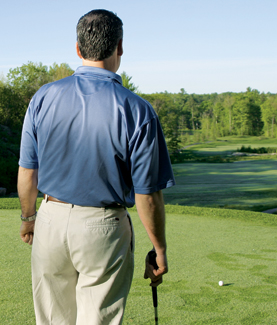 Many of my new students ask me about how to correctly initiate the golf swing. They want to know what trigger will allow them to start their motions smoothly and on the correct path. This common question comes from those who suffer from a condition that plagues everyone, from novices to touring professionals. I like to call it paralysis by analysis. We’ve all experienced those moments when we just don’t feel comfortable over the ball, and the longer we think about it, the more we freeze up, almost to the point where making a natural golf swing seems as foreign to you as a ’40s French independent film. You tighten up. You get nervous. You think to yourself, I hope this goes straight, and subsequently try to guide the ball down the fairway, which we all know rarely works. Then it gets ugly. Does this sound familiar? If so, be ready. We’re going to pull the trigger on paralysis by analysis and shoot it away forever. Here’s where you’ll learn a few mental tips and physical motions that show you how to organize your thoughts and swing routine for a smooth and timely execution of all your golf shots. It begins with prioritizing your way of thinking and ends with continually staying loose.

Step 1._Ê Prioritize Your Way Of Thinking
Ask yourself the following questions before you address the ball.

1. Where do I want to hit the ball (be specific–middle of the green, back side, right side)?

3. What’s the probable trajectory that I’ll get from this lie?

4. Have I practiced this situation before? Do I know how to play this shot?

5. If the answer to #4 is no, then choose an option that you do know well, even if it means playing for par and not pushing your luck for a birdie.

6. Once convinced of your course of action, go ahead and take the appropriate club and make one or two practice swings.

7. Lastly, knowing that you’re committed, address the ball, take one last look and pull the trigger!

If you freeze at address, you’ll have a hard time keeping things smooth and working together. The key is to be prepared for the many different scenarios you’ll encounter on the golf course and rehearse them on the range, integrating the priority list I referred to earlier. The human central nervous system is the most incredible system in the universe as far as we know. Give it a nice picture that is realistic for your ability and let that lead to a well-rehearsed, stored sensation. Apply this sensation to the shot using a trigger that fits you, and presto! This is what leads to great shots. As far as finding a trigger for your full swing is concerned, look at some of your favorite players on Tour and you’ll see a variety of routines that have the same goal. Championship-level golfers all want to be able to swing the club with the best possible timing and tempo for optimal results. Athough your game may not be ready for competitive golf at the highest level, your demands should be the same.

Prioritize my thinking? If only pulling the trigger was that easy! To be frank, the solution isn’t a matter of thought, though the pre-shot plan of attack is a critical component of prepping the mind and body for the task at hand. Instead, it’s a matter of maintaining a continuous motion, from the time you step into your stance to the time you’re holding your finish.

A fine example of continuous motion is a tennis player waiting to return a serve or an infielder anticipating a line drive. Those athletes often are in constant motion, either twirling the racket, slapping their glove, or gently swaying from side to side. They maintain this constant motion in order to activate their brain’s pyramidal system. The pyramidal system in the brain allows information to be passed directly from the eyes through the brain and into the central nervous system without excessive thought processing, thus allowing athletes to tap into their instinctual reactions to their present surroundings. Neither athlete in their respective situation has time to think. They have to act fast, and to do so, they use the pyramidal state of mind, which is a state of reacting and not overthinking. 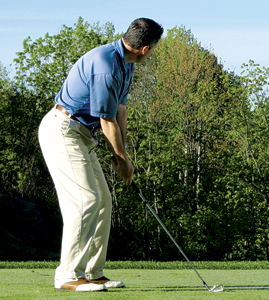 When you stop moving, the extra pyramidal system takes over. This is a postural system that is activated when you become motionless. It’s like a coat of ice that forms over your body. When you need to move, you have to bust out from the ice with a brisk, conscious motion. Just look at the soldiers in front of Buckingham Palace. When they do have to move in case of an emergency, they do it briskly in order to break free.

Your address position isn’t one in which you want to be motionless! If you get into your setup and proceed to start thinking about what swing thought you need, you run the risk of becoming frozen, and this alone can literally ruin any chance of starting your swing smoothly. This is why you prioritize before adopting your stance. Imagine yourself over a four-foot putt and you stop moving completely. Your body stiffens more with every passing second and you start wondering how in the world you’re going to pull that putter back smoothly without jabbing or steering the ball toward the hole. (Both cases often result in misses, by the way.)

There’s a helpful book on this subject by world-renowned neurologist Harold Klawans called Why Michael Couldn’t Hit: And Other Tales of the Neurology of Sports. In one of the chapters, Dr. Klawans explains how Ben Hogan’s routine with the putter was quite different from the one he used with his full swing. His full-swing routine would have a fluid waggle, leading him into his motion. In contrast, his putting technique was almost totally static. In fact, if you look closely at old film footage, you could routinely see him stop moving before his stroke. Hogan had gone on record to say how much he disliked putting and how he’d occasionally struggle with it. He described many important situations over short putts as being frozen over the ball and found it very difficult at times to pull the putter back. The reason? He didn’t maintain constant motion.

Step 2. Stay Loose And Keep Moving
To prevent yourself from yanking or jerking the club back when you initiate your swing, find yourself a waggle or a forward press to activate a smooth motion. Also, the solution to your putting yips is to simply have a routine where you don’t stop moving before stroking the putter. Davis Love III is a perfect example. After his practice stroke, he walks into his stance and address position, looks at the hole one more time, and as soon as his head and eyes are focused back on the ball, he puts his putter into motion.

Watch players like Mike Weir and Vijay Singh. Mike Weir waggles, returns to the ball and is immediately in motion, while Vijay Singh kicks his right knee and hip in slightly toward the ball before starting his swing. One player who used to suffer the perils of paralysis by analysis with his routine is Sergio Garcia. He would stop moving, re-grip the club, then stop moving again. This would turn into a vicious cycle, especially under the pressures of a major championship. Today, thank goodness, he waggles once, re-grips once and then swings. No doubt, this fix is a big reason for his improved play this year.

Moreover, the better your trigger routine, the faster and more efficient you’ll be on the golf course, especially under the gun. Have fun with it, and if you have any questions, please e-mail me via www.shawnclementgolf.com and, of course, if you wish to book a session with me to develop your routine, call (800) 461-0236 or visit www.tabooresort.com.