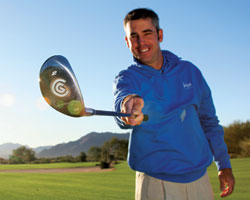 By now, you've probably realized that hybrid clubs are a lot easier to hit than traditionally shaped long irons. The ball flies higher and lands softer with a hybrid, making them ideal for shots deep in the fairway that require a soft landing on the green. But what you may not know is hybrid clubs are also designed to perform well from a variety of other locations on the golf course. From the rough, the fringe, even the bunker—the hybrid can be an effective tool for saving your score. Let's look at four ways to score with a hybrid, and in no time, you'll be reaping the rewards of one of the most versatile clubs in the bag.

The proper ball position relative to your stance is extremely important when playing this shot from a bunker. If the ball is too far back, you'll top it—too far forward, you're going to hit it fat. The right position is to situate the ball a half-inch to one-inch back of where you normally would play your hybrid shot. As you swing, keep your feet planted in the sand as much as possible to prevent slipping and keep your weight in a centered position throughout the swing. This will help steepen your swing to ensure ball-first contact. Truth is, hitting a hybrid from the bunker isn't much different from hitting a regular shot, as long as you make the minor adjustments in your ball position before you make a swing. From there, swing and accelerate through the ball! 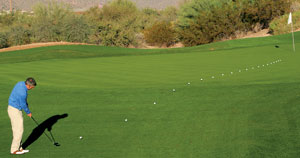 One of the best ways to ensure consistency around the greens is to keep the ball as low to the ground as possible. With a hybrid, you're assured that the ball will start rolling really quickly, making it easier to gauge how far the ball will roll. The key to hitting successful bump-and-run shots begins with choking down on the grip and holding the club with a putting-style grip. The trick with this shot is to emulate a body-driven putting stroke. To further encourage greater accuracy, opt for the square-to-square stroke as shown here. This will help you get the ball rolling in the right direction. As for the hands, limiting excessive wrist movement will make it a lot easier to gauge speed and distance, helping you to hit the ball more consistently and get up and down more often.

When you barely miss the green and end up in light rough on the high side of the hole, don't assume the putt or lob shot are your only choices. Another option is a shot that's more likely to lend a desirable result. Like the previous shot that encourages roll, the chip from above the pin does the same. The key is in knowing where to get the ball rolling. Begin by making sure there's room to get the club behind the ball. Address the ball like you would a standard chip, with your hands slightly forward, the majority of your weight on your forward side and your head directly over the ball. With a confident stroke, chip the ball so it lands in the rough, not the fringe or green. The extra momentum of the hybrid will cause the ball to roll forward even after hitting the rough, which will then slow the ball down so that it will roll softly onto the green. It's a safer shot than a wedge from a downhill lie, that's for sure!

Before you opt to putt or chip from a spot where the ball is resting against the collar, consider the benefits of a hybrid. For one thing, a hybrid has a longer, wider sole that can help push the grass down behind the ball, making it easier to make solid contact. As a result, there's a greater margin for error than with a wedge or putter that can easily slip underneath the ball or get stuck in the grass. To play this shot, address the ball with a putter-style grip, only this time, don't choke up as much. With the ball in the back of your stance, press the hands forward. On the backswing, cock your wrists to lift the clubhead slightly and then swing downward on the downswing. Unlike the bump-and-run, which is more of a body stroke than a wristy one, allow your wrists to hinge slightly to help lift the club away from the collar on the backswing. On the downswing, the ball will pop and roll in a hurry, so be sure to read the green!

Frank O'Connell, PGA, is a 10-year teaching veteran based at the beautiful We-Ko-Pa Golf Club near Scottsdale, Ariz. For more info on booking a lesson, visit www.wekopa.com.

One thought on “4 Ways To Score With A Hybrid”