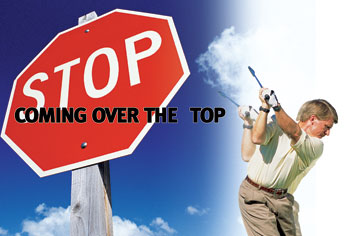 Editor’s Note: Story updated May 10, 2017 — It’s a phrase heard on driving ranges, tee boxes and fairways nationwide. I’m coming over the top. It’s a lament as common as I’m lifting my head or I’m swinging too fast. And as hard as golfers try to correct this fault, most endure little success. The slice sticks around and continues to wreak havoc on the scorecard, head and heart. As a golfer you deserve better!

Golfers who come over the top do so because they have no other option. In other words, coming over the top is a necessary compensation for an earlier problem. In fact, if a player was to actually come down on the inside or on-plane, he or she would be worse off. The key to fixing the problem of coming over the top is to first understand why it happens. Once a player understands what created the need to execute an over-the-top move, he or she can fix the problem at its root, resulting in a downswing that’s from the inside or on-plane.

4 most common backswing errors that result in coming over the top in the downswing are:
1. Taking the club away too flat or under the swing plane
2. Stranding the majority of weight on the left (forward) leg at the top of the backswing
3. Creating a narrow swing arc
4. Leaving the clubface open at the top 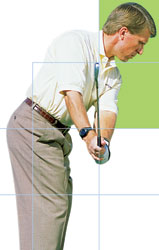 Taking away the club too flat is the most common of the backswing flaws. This flaw can cause a vicious cycle. The more a player is aware that he or she is over the top, the more he or she is likely to take the club away to the inside.

Learning to take the club back correctly on-plane begins with learning the proper setup posture. When most players set up, the first thing they do is look down at the ball by bending at the neck and shoulders, in effect, not bending at the hips. When a player fails to tilt from the hips, his or her natural takeaway plane will be to the inside or too flat—more like a baseball swing than a golf swing.

The proper posture begins by tilting from the hips while keeping the shoulders back and the chin up. This posture is the one that best allows you to take the club back properly, with the clubhead lining up with the hands at the waist-high position and the shaft hinging skyward in line with the left forearm. These moves set the club on-plane and in front of the body and in perfect position to come back down on-plane or even slightly to the inside. 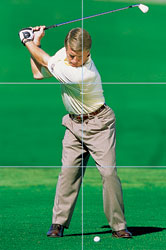 A second flaw that causes an inside takeaway is rotating the arms faster than the upper body. When this happens, the player’s arms get trapped behind the body, and the only way to get them back in front and strike the ball squarely is to come over the top.

Your forearm rotation should match your shoulder rotation. When these two rotations are linked, the arms will remain in front of the body, effectively leaving room to bring the club down on-plane.

What causes a reverse pivot? The most typical flaw is lower-body sway. When the lower body slides away from the target on the backswing, the upper body falls toward the target. The cure to ending the reverse weight shift is to learn to resist with the lower body and coil with the upper body. The lower body should be the foundation for the upper body during the backswing. Tiger Woods commonly talks about the importance of maintaining pressure on the inside of his right leg by slightly forward-pressing his right knee toward the target as he takes back the club. By doing so, he keeps his hips from sliding, yet allows his right leg to accept the rearward transition of weight. 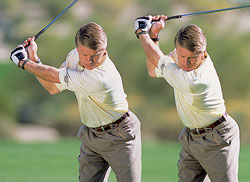 The third most common reason for coming over the top is narrowing the swing arc. A good way to think of swing arc is the distance between the butt of your golf club to the right side of your head at the top of the backswing. If and when the swing arc narrows, the room needed to drop down the club on-plane in the downswing disappears. The typical reaction to this lack of swinging room is to throw the club out and over the top.

The most influential component of swing arc is the position of the right arm throughout the backswing. A player with a narrow swing arc tends to fold the right arm too early or keep it unnaturally pinned to the right side all the way to the top. Both flaws pull the club in too close to the body. The player with this flaw will feel the need to free the club by throwing it way over the top and away from the body. 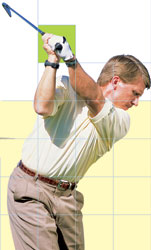 As you take the club to the top, focus on pressing your right palm against the your left thumb (for right-handed golfers). This maintenance of pressure effectively pushes the butt of the club farther away from the head while also straightening the left arm and leveraging the golf club. If you can maintain that pressure to the completion of the backswing, you’ll create all the room you’ll need to naturally pull the club down on-plane.

The fourth most common reason why a player comes over the top is an open clubface. When the clubface is left open at the top of the backswing, the natural reaction is to swing to the left (over the top) to get the clubface square at impact.

An open clubface at the top can typically be traced back to a weak grip at address. Weak, as it’s used here, refers to the actual strength of your grip, not the positioning of your hands on the handle. If you grip the club with your palms, you have a weak grip, and the club will tend to fan open in the takeaway.

In a stronger grip, the club runs more through the fingers. The left thumb pad sits more on top of the grip, while the lifeline of the right palm sits on top of the left thumb. This grip will allow you to set the shaft on-plane in the takeaway, set your wrists properly and keep the clubface from fanning open.

If any of the errors described here exist, attack them by using the advice provided. This approach will produce cures that result in long-lasting, positive results.

10 thoughts on “Stop Coming Over The Top”