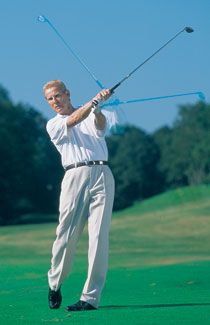 Golf Fact #1: There are millions of golfers who have never hit a hook, but there isn't a single player alive who hasn't at one time or another sliced the ball. Why? Think of it this way: In terms of golf survival, the mother of all musts is getting the ball into the air–it's the first and by far the most important problem you must solve. And to get the ball airborne, many golfers feel the need to chop down on the ball with an open clubface and with a very steep approach. While this technique works well as in Houston, we have liftoff, the joy in the control room is short-lived because while steepness is your friend during liftoff, it's your enemy during the rest of the flight, imparting too much sidespin on the golf ball.

So here's the great paradox in golf: Imbedded in the cure of its most primordial problem (getting the ball airborne) is the virus that causes the slice (an open clubface). Accomplish the one and you're automatically infected by the other. Now, the second great paradox: You're aware of all this, but nonetheless can't stop slicing. The reason why the slice is such a pesky foe is that there are three unique kinds of slices (plus their offspring), and the generic cures offered in most instruction articles don't work because they're written for The Slice, not the slice you have at a particular moment.

With the ball flying so far right, you adjust by opening your stance and aiming to the left of the target. Now, the ball starts way left and slices back toward the target–the Baby Boomer. Aiming more to the left to accommodate your Baby Boomer works until, in an effort to hit it too hard with the right side, you actually square the clubface to the path with an aggressive over-the-top move of the shoulders. The result is a pull way left of target. (In the family of slices, the pull is the first cousin to the slice.) To correct the pull, you introduce a chicken-winged left arm to open the face at impact. This results in an even bigger slice that finishes to the right of the target (the Adult Boomer). To fix this, you aim (open up) even more left and employ more chicken wing. This causes the mother of all Boomerangs, the Sonic Boomer, a ball that starts way left and exits right, melting your scores as it nestles somewhere near Topeka.

Sick of this score-wrecker, you listen to the advice of your playing buddies that you're aiming way left, so you aim in the general direction of the target, but still employ your old friend the chicken wing. Aided by the open face at impact, the ball starts in the general direction of the target and then spins to the right–welcome to the Flare. Hit enough Flares and you'll subconsciously open your stance to start it more left, causing a reintroduction of the Baby Boomer. And so the cycle goes.

I've seen thousands of golfers endure this endless loop of faux fixes and slice progressions. The good news is that it doesn't have to be this way. We're about to embark on a Slice Eradication Program (S.E.P.) that I'm sure will help you get your ball flying more toward your targets. The S.E.P. involves: 1) recognizing that there's more than one way to slice a golf ball; 2) identifying what slice you're currently producing (see above); 3) learning the key anti-slice matchups; and finally, 4) grooving a no-slice swing. 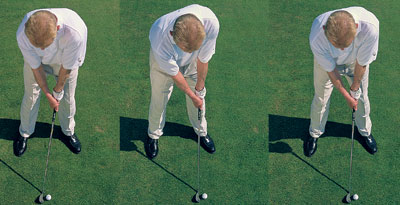 1. Target And Clubface
Aim your clubface correctly so it's pointing where you want the ball to start. Select an intermediate target, then use the vertical aiming lines that are a part of every club to get your clubface pointed in the right direction.
2. Body And Target Line
Arrange your body correctly, paying particular attention to your shoulders. In the swing, the arms follow the shoulders; if your shoulders are too open or closed at address, you'll cut across the ball at impact.
3. Spine Angle And Shoulder Tilt
Since the shoulders work perpendicularly to the spine, how your spine is angled at address holds the key to what kind of slicer you are. If your spine is too upright, your shoulders will swing on too level a plane, trapping the club behind you so you have to come over the top and produce the Boomerang or, if you exaggerate enough, the Right-To-Right. If your posture is too bent over, the club will swing on too steep a plane, often causing the Flare.
4. Ball Position and Shoulder Position
A ball that's played too far forward causes the shoulders to open; too far back creates closed shoulders. Use the ball position that will allow you to align your shoulders parallel left to your target line–it will vary according to your body build.
5. Grip And Clubface Position
The positioning of the hands on the grip must allow for either a flat or slightly bowed left wrist–stay away from the slice-causing cupped wrist. A neutral grip typically creates a flat left wrist (square face), a strong grip augments a bowed left wrist (shut face) and a weak grip too often creates a cupped left wrist (open face).
6. Foot Flare And Release
The front foot should be adjusted by experimenting with less flare. The amount of flare of the front foot controls the release of the clubface–the less flare, the sooner the front leg straightens, causing an earlier release by squaring the face more aggressively.

Groove A No-Slice Swing
The following anti-slice fixes apply only to the specific slice type for which they're meant to cure. This illustrates the importance of recognizing the type of slice your swing typically produces–whether it's the Flare, Right-To-Right or Boomerang. Once you define your slice, the journey is half over as the following fixes are quick and take just a few practice hours to ingrain.

Fixing The Right-To-Right
Curing the slice demands a counterintuitive approach. Basically, the cure isn't what you think it should be. You have to do the opposite of what you think because the slice is a fooler–feel and real are different._Ê

To fix the Right-To-Right, your task is to start the ball left of target and let it fade back to target. Once that's done, experiment deflaring your front foot until the ball begins to draw away from the target. Then, adjust your aim/alignment until the ball flies directly at the target as follows: 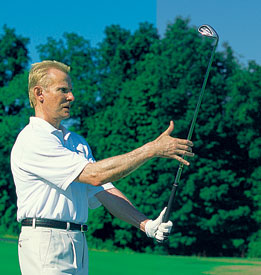 1. Aim slightly left of the target and align your body parallel left to the clubface line.
2. Move the ball forward in your stance one ball width.
3. Incline your spine more than you're used to by bending more from your hip joints (not your shoulders).
4. Increase the flare of your back foot to promote more backswing turn.
5. Hinge your wrists correctly (see the In-Line Hinging Drill).
6. From the top of the swing, bring the club down before it moves around (see the Down-Then-Around Drill).

In-Line Hinging Drill
Stand with your left arm and shaft extended in front of you in a straight line. Now, hook the shaft with the fingers of your right hand and pull directly toward your head, just as you'd cock the hammer of a pistol. This is hinging or in-line set. Any cupping opens the face. Again, you want a square or slightly bowed left wrist at the top of your swing.

Down-Then-Around Drill
Get to the top of your swing and stop. The first move is to drop the arms down to waist high without turning your upper body. Do this, then stop. Slowly bring the clubface to the ball with your body turn. This will give you the feel of first the club comes down, then it comes around. Get into your address position again and stop halfway back in your takeaway. Pump your arms to the top, then back down to halfway. Do this twice. On the third pump, hit the ball. Once the ball starts drawing away from the target, adjust the ball position and aim/alignment until the ball flies directly at the target.

Fixing The Boomerang
Your task is to start the ball well right of target then, by making the following changes, spin the ball back toward the target.

1. Aim your clubface to the right of the target–a lot for the Sonic Boomer, a little for the Baby Boomer.
2. Align your hips and feet parallel left of the clubface and with your shoulders slightly closed.
3. Move the ball back in your stance two ball widths. This will generate closed shoulders.
4. Increase your spine incline by bending more from the hips than usual with your rear end out and up, as if you were sitting on a tall bar stool.
5. Keep your hands on your toe line during the takeaway. To help you accomplish this and guard against an inside takeaway, pick a spot about 24 inches away behind your ball on the target line. Tap this spot with your clubhead hard enough to leave a mark. Now, take you clubhead over the mark during your takeaway. This guards against bringing back the club too far to the inside.
6. On the downswing, approach the ball from inside the target line (see the Inside Path Drill).

Inside Path Drill
Set up an arc of balls. The concept here is that you swing over the first ball and hit the second ball, then let the clubhead pass over the last ball on the arc. (It won't actually pass over the last ball, but it should feel as if it does.) Swinging along this line grooves an inside approach to the ball.

7. With these adjustments, your ball will fly to the right. Your task is to spin the ball back to the target by imparting right-to-left sidespin. Adjust the amount of spin by the amount you release your forearms (see Forearm Release Drill). After you can successfully spin the ball from right to left, cut back on the level of forearm rotation and adjust your aim and alignment until the clubface points at the target and the body is aligned parallel left. 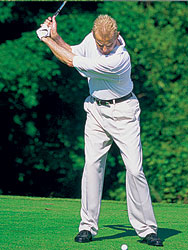 Fixing The Flare
Of all the different slice fixes, the Flare is the easiest to correct. You simply need to add more forearm rotation and link the turn with the movement of your body.

1. Aim your clubface slightly left of the target along with your hips and feet.
2. Deflare your front foot to encourage an earlier release of the clubhead.
3. Move the ball back in your stance about a ball width to guard against open shoulders.
4. Release your forearms through impact (see the Forearm Release Drill).
5. Be sure to rotate your body in sync with the rotation of your forearms. If you stop your body, you'll pull the ball to the left.
6. Once the ball starts left of target and stays there on a regular basis, adjust your aim until the ball flies directly at the target.

These steps may sound complicated, but in reality, they're a natural progression of moves to combat the series of mistakes repeated, lost and repeated again during the Vicious Slice Cycle. If you're serious about ridding your game of the banana ball once and for all, follow the above-mentioned steps. There are other quick cures out there, but rarely do they fix the true root of the slice problem. The Slice Eradication Program, however, will produce tangible, lasting improvement.

PGA professional Dr. T.J. Tomasi is regarded as one of the top 100 teachers in America, and is one of the most widely published authorities on the golf swing. He currently instructs at Pistol Creek Golf Club located just outside Hartford, Conn.