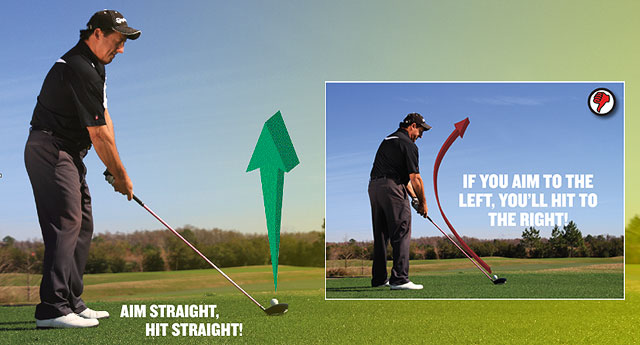 Hitting a big, weak slice is never any fun. Not only do they rarely travel very far, but they’re impossible to control, especially when there’s the slightest breeze or you’re playing in fast and firm conditions. It’s the number one bugaboo of most amateur players. And when they attempt to cure their slice, it often gets worse because they haven’t the proper know-how to manage the movement of the ball and start hitting straighter tee shots. In this article, I want to put an end to complicated, tedious anti-slice advice and help you get rid of that pesky banana ball once and for all. Read on, follow these easy tips, and slice no more!

One of the most common mistakes I see from amateurs who struggle with slicing is improper aim and alignment. The first and most important key to getting rid of a slice is to stop opening your stance (as you can see in the photo on the opposite page). Doing this will force a swing path that cuts across the ball from outside to inside the target line, adding more slice spin. The solution? Square your shoulders so they’re parallel to the target. As for your feet, they should be square, or even slightly closed (also opposite page) to encourage an inside-to-outside the target line path.

Why does aiming left cause you to slice? In most cases, it’s because many slicers think they’re aiming to the left, when in actuality they aren’t. When you set up and then open your stance, you’re actually moving the ball back in your stance. Also, when you do this, and you don’t close the clubface as well, you’re in position to hit an even bigger slice!

Get A Good Grip

When it comes to your grip, again, things may seem a bit counterintuitive. To help avoid slicing, the more you turn your hands to the right, the more inclined you’ll be to start hitting your shots straight, or even a little to the left. This is what’s sometimes referred to as a “strong grip.” But I think that’s a bit of a misnomer. I prefer to call it an “active grip,” since many think a strong grip means gripping the club firmly, with a lot of pressure. However, the firmer you grip it, the less your wrists will roll and close the face through impact, so don’t do that! Position your hands as you see here, and maintain a firm, but supple, grip pressure. Don’t tense up; instead, let the position of your hands do its job and get the hands more active during the swing. I’ll bet you see fewer slices right away.

To do this, make an adjustment in your setup by tilting your shoulders away from the target. See how my right shoulder, and even my right hip is slightly lower than my left at address? This tilt will encourage my body to take the club back and to the inside. If I set up with my shoulders level to the ground, I’ll be more inclined to swing along or away from the target line, thus forcing me to swing from the outside in, causing me to swipe across the ball and impart a lot of slice spin.

Finally, once you get the tilt at address ready to go, hold it all the way through impact!

We cover the chicken wing a lot in Golf Tips. And in case you’re wondering why, it’s because we instructors see a lot of them, especially with those who slice the golf ball. Just look at the clubface in the above photo. It’s wide open, facing to the right! Now, to stop the chicken wing, and to let the hands roll over through the hit, try using a credit card as I’m doing here. Slide it just below your left underarm and practice swinging without dropping it. This will force you to roll your hands and not lift your left elbow up and out of the proper position.

I love this drill for eliminating the slice. It’s also super simple. Just grab your driver as you normally would with your left hand, and with your right hand, grip all the way down past the grip and directly onto the golf shaft. Now, go ahead and make a few three-quarter swings. As you do this, because of the separation you have between your hands, you’ll really feel the clubhead turning over as you move your way through the downswing. This drill will effectively do its job of activating your hands so they release more effectively and help prevent hitting the ball with an open face.

Practice this drill often, and watch that slice start to disappear.

Also, as a bonus, this is a great drill for just about every club in the bag. Try it with your irons and wedges. It’s a great way to get loose before a round.

Getting rid of a slice sometimes requires you to not only think about the right positions of the body before you hit the ball, but also be aware of where you end up after you make contact. I like to encourage my students to imagine where the clubhead is after they make contact. And in this case, to really reduce or eliminate a slice, the clubface should be facing down toward the ground. In the photo on the opposite page, you can see I’ve done just that, with the clubface facing the ground. This is a great indicator of the proper hand rotation as well as body rotation through the shot.

The next time you find yourself struggling with a slice, concentrate on where the clubhead is after impact, not before impact. This will help you swing more freely and keep your hands rotating all the way through the shot. In the photo, notice the extension of my arms through the shot, and how they’re positioned directly in front of my chest. The more you can keep your arms and the club in front of your chest, the easier it is to rotate the hands and clubface and put an end to slicing the golf ball. Also if you can point the clubhead down after impact, as demonstrated here, you’ll put an end to sliced shots.

Follow these easy tips for curing a slice and I’ll bet, in no time, you’ll start hitting straighter and longer shots!

Longtime Golf Tips contributor Barry Goldstein is regarded as one of the country’s leading golf instructors. He currently teaches at Inverrary CC in Fort Lauderdale, Fla., as well as the Maine Golf & Tennis Academy in Belgrade, Maine. For more information, email him at drforgolf@aol.com.

12 thoughts on “Slice No More”