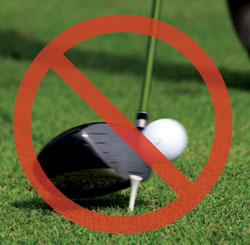 Square The Clubface And Hit It Straight!
As most of us know, the slice is probably the most common fault in all of golf, particularly for the recreational player. Though that fact isn't particularly surprising, what is surprising is how long people are willing to struggle before seeking a legitimate method of eradicating the slice from their game. One of the typical methods players pursue in hopes of straightening their slice is trying to develop more of an inside-out swing path, which isn't necessarily a bad thing. However, though an outside-in swing path definitely promotes the production of left-to-right spin (slice spin), the ultimate cause of slicing is an open clubface at impact. Learn to get the clubface square through the hitting zone, and that left-to-right spin—and those banana balls—will quickly disappear.

The basic fact that all slicers have to accept is that, though other factors contribute to poor golf shots, more than 70-percent of shot shape is due to clubface angle and nothing else. Controlling the clubface is the secret to both solid contact and accuracy, and is the one thing you must focus on if you hope to improve. To help accomplish this task (which isn't as daunting as you might think), I've come up with three simple clubface keys that just about any golfer can learn. Work on these keys, and I guarantee your slices will become significantly less severe, and maybe straighten out completely. 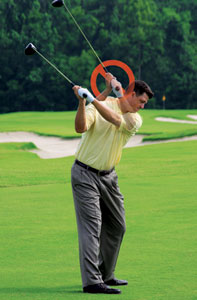 #1 Proper Grip
The hands have a bigger influence on the clubface than any other element in the golf swing. Due to this oft-overlooked fact, golfers regularly lose focus on the grip and allow it to play a major role in creating a variety of slices. To begin eliminating left-to-right spin, make sure that the grip of the club is running through the fingers and not the palm of your glove hand. The V's formed by your thumbs and forefingers should point toward your right shoulder at address in order to ensure a square or even slightly closed clubface at impact. I recommend placing tees in the webbings of your thumbs (as seen below) to help see clearly if your grip is correct.

In the photo on the below left, you'll notice that the tees lean toward the target and the V's in my hands point toward my front shoulder. This overly weak grip is a typical slicer's mistake that must be avoided. Instead, make sure you utilize a relatively strong grip as seen on the below right.

Lifting your hands steeply above the plane promotes an open clubface and a cupped left wrist. Instead, keep your left wrist flat and the clubface square.

#2 Flat Left Wrist
Everyone has been told at one time or another to strive for a flat left wrist at impact, but it's almost equally important to achieve a flat left wrist at the top of the backswing, especially if you're a chronic slicer. In the picture at the right (opposite page) I'm clearly demonstrating the correct (flat left wrist, square clubface) and incorrect (cupped left wrist, open clubface) positions at the top of the swing. Note that my left wrist is clearly in line with my left forearm and the clubshaft in the correct position, while in the incorrect position my left wrist and the back of my left hand are clearly not in line with either. This is a critical difference that has a lot to do with shot shape.

A good way to achieve the proper, flat left wrist position at the top of the swing is to imagine the logo on your glove, as well as the clubface, facing toward the sky as you reach the top. This is a bit of an exaggeration, but it will help get you going in the right direction. Another good trick is to feel as if the clubface stays slightly hooded in the backswing, or in other words, pointing toward the ground. 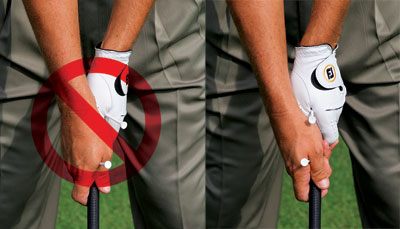 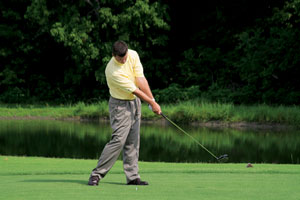 #3 Turn The Toe Past The Heel Through Impact
This is a concept I pilfered from my former employer, Jack Nicklaus. Mr. Nicklaus used this technique whenever he needed to draw the ball from right-to-left, because he felt that having the toe of the club beat the heel to the golf ball encouraged the clubface to close through impact. The secret to mastering this face-closing procedure is to try to start the rotation of the clubhead prior to impact and complete the rotation just after impact. Most people simply don't rotate the face enough in the downswing, or else, do it much too late. To get the proper feel, make some practice swings and freeze just after impact. Make sure your glove hand is below your non-glove hand every time. If your non-glove hand isn't on top, you definitely need more hand rotation.

To make certain you rotate the clubface correctly through the ball, hold your position just past impact and double check that your right hand is above the left.

Tim Brown is a Teacher of the Year recipient and the Head Pro at Timberlane C.C. in Gretna, La