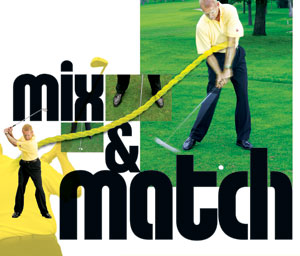 Every golfer has suffered through it–getting worse while attempting to get better, ultimately tinkering unnecessarily and sending an A game directly to F. While it’s important to discover ways to fine-tune your swing, it’s critical that you do so with an eye toward keeping the key elements of your motion intact. Uninformed tinkering invariably unbalances your swing’s matchups, and it’s a big reason why most recreational players can never truly rid their games of slices and hooks.

This article will provide you with a way to construct a better overall swing and then keep it free from swing viruses. The key to this method is becoming aware of your swing matchups–the blueprint that will allow you to assess the advisability of each swing change under consideration. To build a sound swing and then keep it healthy and devoid of errors, you should know how to construct your own personalized matchup string.

The Law Of The Strings states that the golf swing is comprised of several elements that, when joined, form a string. The Law also states that if you change one of the partners in the string, you must change the others to prevent your swing from becoming unbalanced. The key elements of your string are clubface position, ball position, front foot flare, hip action and release pattern. The most dominant element of the string is clubface position at the top of the backswing. As such, an open-face player has one kind of string, the square-face player another and the closed-face player still another. 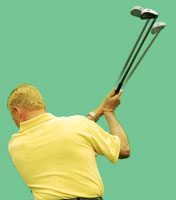 2 Square-Face Player. The square-face player requires a medium ball position, a flared front foot, modest lateral hip action and a blended arms/hands/body release pattern with a slight bend in the back elbow at impact.

Clubface Position
The position of the clubface at impact is what controls shot direction, but since it’s difficult to see clubface position at the point of impact, clubface position at the top of the swing is used to classify players. In the absence of any downswing compensations, a closed face at the top will produce a draw while an open face will create a fade. If the face is too closed, you get a hook; too open, a slice.

An open face at the top has the toe of the club pointing toward the ground. The toe of a closed clubface points toward the sky. To determine your face position, use a video camera or, better still, consult your teaching pro.

Ball Position
The range of ball position for any club is from the middle of the stance to the tip of the front shoulder. Basically, the farther forward the ball position, the more to the left the ball will initially start. This explains why an open-face player needs to play the ball forward, so the ball will start left of target, then fade back. A closed-face player needs the ball back toward the midline of the stance in order to allow for the draw. 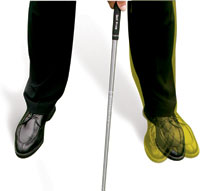 Mismatching ball position and clubface position is seriously dangerous business. A fader of the ball will face a long day of high slices to the right if he or she plays the ball too far back in the stance. A square-face player with this same ball position will hit mostly pushes. Conversely, a draw player (closed face) will hit low hooks with the ball played too far forward while the square-face player, who’s otherwise perfectly matched up, will pull the shot.

Foot Flair
Turning out your front foot (flaring) delays the formation of the left wall that triggers the release, a good match for an overly shut face where delay is beneficial. Deflaring your front foot makes the release occur sooner and is helpful to the open-face player whose fade has turned to a slice. Foot flare ranges from deflared (foot perpendicular to target line) to max flared (45 degrees to target line). 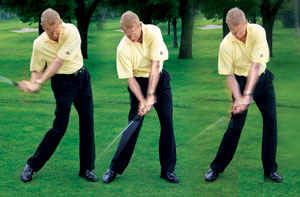 The more your hips move laterally before they turn, the more time the clubface has to rotate through impact. Thus, a lot of lateral hip action provides an open clubface the time it needs to square up. To prevent overclosing of the shut clubface, the matchup is hips that rotate early with minimal lateral motion.

Release Pattern
The angles of power created during the backswing must be released at impact in sync with the rest of the elements in your matchup string, most notably your clubface position. An open clubface requires a more hands/arms release where the right elbow straightens to push the face square. A shut face demands a body release where the hands/arms are very quiet and the right elbow bend is retained to hold off the rotation of the clubhead. Mismatch these in any combination and you’ll produce the opposite trajectory and ballflight you’d expect from your typical motion.

What these matchups add up to is a simple credo I teach all of my students: If you want to change your swing, you must change your string. In other words, you can’t simply alter the individual components of your motion–it’s an all-or-none endeavor.

The best way to get matched up is to choose your string, then experiment with each element of that string to find the exact ball position, foot flare, hip action, etc., that fits your body type, strength and flexibility. If you’re committed to improving, experimenting with different foot flares and ball positions can be a lot of fun. String elements are powerful, and slight changes in each can create very different ballflight patterns. Strategically charting the results from changing different string elements will put you more in touch with your game and greatly increase your knowledge and command of the physical dynamics of the swing.

One thought on “Mix And Match”