How many times have you been told the reasons why you slice, without being told what you actually need to do to stop slicing? Too often I hear instructors explaining the cause and effects of sliced shots, without providing a shred of information on what kind of swing is required to prevent banana balls. If you find yourself agreeing with me, then my lesson in the next few pages should be right up your alley. Unlike other articles, we aren't going to figure out why you're slicing. That's not going to get you anywhere, considering it only deals with half the problem. Instead, I'm going to teach you what it takes to draw the ball so you can start hitting more approach shots from the fairway instead of the right rough. Sound appealing? Good. Let's hook that slice once and for all._Ê 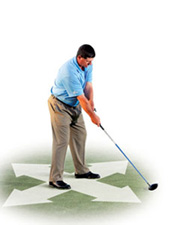 Balance Your Setup In All Directions
To eliminate the slice, let's start from the beginning. The address position should reflect an even weight distribution in every direction. In other words, your weight should be evenly distributed over both feet and proportionally on the balls and heels of your feet. For example, think of an infielder ready to catch a line drive. By flexing his knees and balancing himself in every direction, he's ready to spring in any direction to catch the ball. As a golfer, you too should be in a similarly athletic position to be ready to make a golf swing. If you're leaning one way or the other, it's a sure bet your golf ball will lean to the left or right as well.

Avoid leaning
The natural inclination to fight a slice is to lean away from the ball, but in actuality, that will make your slice worse! Keep your balance in every direction, and you'll see it's easier to turn through the golf ball.

Tilt Away Before You Start
Once you've established an evenly weighted stance, the next ingredient for slice busting is to tilt the shoulders away from the target. This means lowering your back (my right) shoulder so that your shoulders slope downward away from the target. This is key! Many golfers who struggle with slicing do so because they invert their shoulders at impact and swipe down on the ball with a forward shoulder that's lower than the rear shoulder. That position is both a weak and inconsistent one. Come time to hit a draw, the left shoulder must remain above the right to ensure the needed inside-to-outside and upward swing path that's required to put draw spin on the ball.

You'll Hit It Higher
Tilting your shoulders will produce an upward blow into the ball that will help you not only draw it, but hit your tee shots higher. That means not only will you kill your slice, you'll hit it farther down the fairway with added carry and roll. 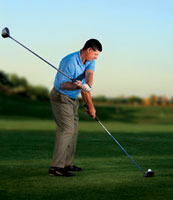 Swing Underneath Your Shoulders
Now that you've gotten the setup and shoulder positions ready, how you move during the onset of the downswing makes a big difference on whether you're going to hit a slice or draw. To draw the ball, you have to swing below the shoulders. If your hands get above or out in front of your shoulders, you're going to come over the top of the ball, hitting either a double-crossed hook or a big slice (depending on whether or not the clubface is open or shut). Check out the photo. Notice how my clubshaft is below my shoulders and not out in front or above them. That's a sure sign I'm swinging from the inside and not over the top. My hands are also inside of where they were at address, further illustrating the inside-out path.

Move Inside Out
At address, the target line extends from the clubface to the target. Anytime the golf swing gets out to the right of the line before contact, it's a sure sign you'll pull it, slice it or both! Start the downswing from inside the line and swing away from it. 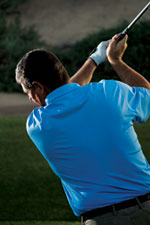 Flatten Your Wrist At The Top
To fight a hook, Ben Hogan used to cup his left wrist at the top of the swing. What that meant was, he would create an angle between the back of his left hand and left forearm. Now, since we want to do the opposite of Mr. Hogan and try and draw the ball, it's critical that the left wrist (right wrist for southpaws) remain flat in order to avoid rotating the clubface too far open at the top of the backswing. With the left wrist flat, the clubface will remain square or closed at the top of the swing, helping to prevent an open face at impact that would then send the ball veering off to the right. Keep a flat left wrist, and don't forget to periodically check in front of a mirror to make sure you're in the right position.

Hand Action
Not only should the back of the gloved hand be flat with the forearm, both hands should reside right above the back shoulder at the top, like you see here. This will help you make a swing from the inside out with a square clubface at impact.

Arm Rotation
I'm willing to bet if you're a slicer, you probably don't rotate your hands properly during the downswing. Also, you may not realize that the way to a square clubface at impact is to continually close the clubface through the downswing. If you stop closing the face and start sliding, the face will open, causing—you guessed it—a sliced shot. To get your hands moving, here's a simple drill to encourage more rotational movement with the hands. Start with the left hand, as I'm doing here. As you make your backswing, rotate the hand in slow motion until the left thumb points up on the backswing. Then as you begin the downswing, allow your hand to roll open, with the thumb pointing straight out in front of you as your hand crosses your sternum. Through the finish, the left hand should open completely. Make the same motion with your right hand as well, and concentrate on rolling the hands as opposed to sliding the hands as many slicers do. This drill will help you ingrain the proper hand rotation necessary to close the face through impact.

Keep Your Head Behind The Golf Ball
One of the biggest myths in golf instruction is the one about keeping the head still during the golf swing. If you do that, odds are you won't be able to transition your weight toward your back foot on the
backswing, invariably leading to a reverse pivot or some other slice-inducing move. Instead, allow the head to shift back as the body shifts its weight on the backswing. On the downswing, allow the head to move forward, but not too far that the head gets out in front of the golf ball. If the head leads too much, the body will follow and the hands will have no chance of catching up! The result? Usually a nasty slice. Keep the head behind the ball throughout the swing, and you'll be more likely to swing from the inside and avoid hitting a slice.

Thumbs Up
Notice how in both scenarios, my hand is fully rotated and my arms are extended? That's important! My extended arms mean the hands can freely rotate, while my body stays behind the ball. 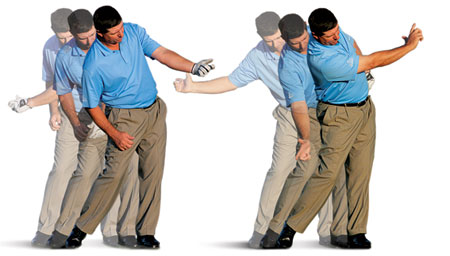 Square Your Shoulders
In theory, when someone tells you to aim at the target, you'd assume that means aim everything at the target, right? Wrong! The correct way is to aim the clubface at the target and position your shoulders parallel to that line. Aiming the shoulders to the left only accentuates a swing that cuts across the ball from outside-to-inside the target line, producing a weak slice. Conversely, if the shoulders point to the right of the target, you're likely to either force the upper body to over-rotate or even swing too much from the inside. The goal is to swing from the inside, but not too much that the hands get stuck behind the body on the downswing. Stay neutral! The key to hitting draws involves a swing path dictated by the turn of the whole body, not just the shoulders.

Use A Club For Help
It's not uncommon to see Tour pros use a club like this during their warm ups to remember to stay square. If you open or close too much, timing the right impact position becomes a real chore. Stay square to hit more draws! 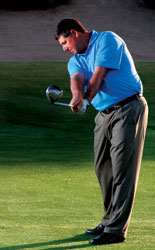 Extend Your Arms
Sometimes, putting an end to the banana ball requires a simple swing thought that will inevitably control the entire swing. In this case, reminding yourself to extend your arms will help you close the clubface and prevent a slice-inducing, bent-arm, chicken wing position at impact. Also, extending the arms will likely encourage the rest of your body to continue turning, which in and of itself is another necessary ingredient to hit a draw. Speaking of which, hitting a draw (and not a snap hook) requires you to swing from inside out, and doing that requires your forward (my left) shoulder to remain above my back shoulder. Do that as you extend your arms and you'll see that hitting a draw is a lot more natural than you might have thought!

Right over left
After impact, the ungloved hand should be on top of the gloved hand (as I'm doing here). If not, it's a sign that the hands haven't rotated properly. Rolling the hands will help you draw the ball and hook your slice once and for all.

One thought on “Fight the Right”