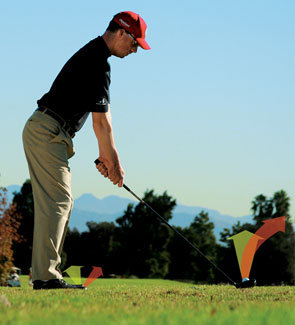 Body alignment is one of two key setup elements most frequently changed by amateur golfers (the other is ball position). Because players often associate the alignment of their upper body with the starting direction of the ball off the clubface, they tend to incorrectly alter their alignment for a variety of reasons, the most common of which is to compensate for a chronic pull slice. While the logic of aiming the torso further left to prevent hitting the ball to the right may appear sound at first, this faulty compensation actually causes more harm than good in the long term.

Another common alignment change players make when fighting a pull slice is aiming their feet to the right of the target, creating a body position that features a closed lower body stance and open shoulders. So instead of aligning the shoulders and feet square to each other, as they should be, the player has assumed a classic pull-slice setup position without even knowing it. In effect, they've fueled the fire that they're trying to fight.

The important thing to understand regarding a pull-slice stance is that it starts a chain of events that's almost impossible to stop or save in the downswing. When the feet are aligned farther right of the target than the shoulders, it almost always results in a takeaway that goes too far to the inside along the toe line and then back out over to the shoulder line on the way down. This inside takeaway and over-the-top transition results in a club that strikes the outside of the ball, starting it left with a high degree of left-to-right spin. Remember, you always want to give yourself a chance to hit the inside of the ball if you want to make consistently solid contact.

The Fix: Put a shaft down on the ground and point it slightly left of the target. Assume your setup position and point your shoulders slightly right of the target. Make sure your left foot is farther from the ball than your right foot and your left shoulder is closer to the ball than your right (feet slightly open, shoulders slightly closed). This position will allow you to deliver the club from the inside rather than over-the-top, across your body, and you should immediately feel freer and more powerful.