4. STRENGTHEN YOUR GRIP TO HIT A FADE

One of the most misunderstood aspects of the golf swing is the grip. In actuality, whether you have a strong or weak left hand, you still can find a way to hit either a draw or fade. Typically, instructors equate a fade with a weak left hand, but I’m hear to tell you that’s not the only way.

An effective way to hit a surefire fade is to adopt a strong left-hand grip. The only possible caveat from attempting this shot is that the hands will have a delayed release, meaning you’ll likely lose some power. But if it’s a fade you want, here’s how you do it.

The trick is to hold the left hand in a strong position at impact, as I’m illustrating in the above photo. What will be required to pull this off is a strong rotation of the body, which should continue rotating well after impact with the golf ball.

And again, because the act of holding the hand in this position will delay the release and rotation of the clubhead, the fade you produce won’t have a ton of power. But if you’re looking for a repeatable, accurate shot that flies high and lands softly, the delayed-release fade is ideal.

To prevent your fade from becoming a slice, make sure you keep rotating your body through the shot. Also, the clubhead will need to release at some point. If you try to stifle your release entirely, you not only run the risk of injury, but also will slice more and lose even more power and control.

Finally, it’s important to acknowledge that although releasing the hands and rotating the hands should happen simultaneously, they’re not the same thing. The hands will release, but in the case of this shot, the rotation is what you should try to lessen in order to hit a powerful fade. 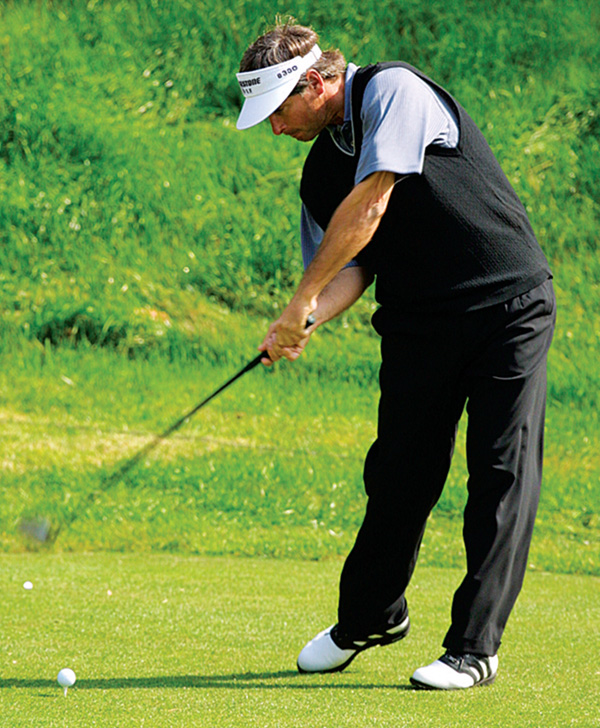 One of the most prolific and exciting players to ever play the game, Fred Couples has made a hefty career out of hitting a big, powerful fade off the tee—with a strong left-hand grip, mind you.

Like A.J. said, the key to Couples’ ability in hitting a fade is his big body rotation through the shot, which then prevents him from blocking and slicing the ball to the right. But where does his power come from? Like most Tour players known for power, Couples is among the best at not only making a solid rotation, but also retaining the angle between his left arm and the shaft in the few microseconds before making impact with the ball. Also, like A.J. said, Couples is able to release the club (unload the angle between the shaft and his left arm) without rotating the clubface closed (which otherwise would produce a straight shot or even a draw). Releasing and rotating are two different things. To hit the power fade like Freddie, you have to make a strong release with less rotation.
—Ryan Noll