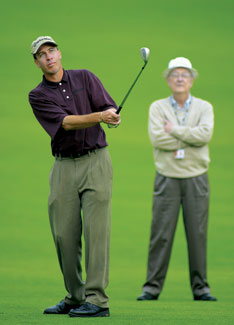 As an instructor with over 50 years of teaching experience, I've seen my fair share of golf swings—both good and bad. Most of the bad swings I see are marred by basically the same series of mistakes. Similarly, good motions are defined by several, rock-solid commonalities that, if you know what to look for, stand out like a sore thumb on a tiny hand.

I met Todd Fischer at the 2001 U.S. Open at Southern Hills. Though Todd wasn't playing competitively at the time, he owned the type of swing that you would define as great as soon as you saw him start his backswing. We worked a little, and soon thereafter he stormed through a season and a half on the Nationwide Tour, ultimately securing his PGA Tour card and posting two top tens in his rookie season.

What makes Todd's swing so great? What does it possess that yours doesn't? Before you get too down on yourself, take solace in the fact that Todd is a golfer who has simply worked hard to get to the position he enjoys today. He wasn't a prodigy or a freak of nature who could break par before he could walk. He joined the elite ranks by focusing on the chain of events—beginning with the setup—that lead to centered, powerful contact, applying the mechanics of the modern golf swing as well as a few homemade moves. It's a swing that works, and is rife with the elements all great swings share and from which you can learn.

Balance
When you look at a great golfer swing the club, the first thing that stands out is their balance. Compare that to your own motion or to one of the lesser-skilled members of your foursome, who's constantly falling backward, forward, away and to the target. If all of my students swung with an attempt to maintain balance instead of killing the golf ball, they'd drop five strokes immediately.

Balance throughout the swing is created by a proper setup, one that features the following ingredients: A) Head positioned behind the ball with the right shoulder situated slightly below the left and both shoulders aligned parallel left of target; B) Neutral hands (positioned just inside the left leg) and knees slightly flexed (stacking the chest, knees and toes); and C) Feet positioned slightly wider than shoulder width, providing a solid foundation. 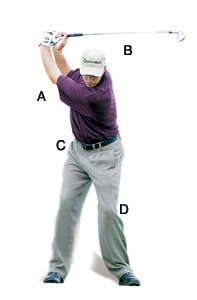 Takeaway
A great takeaway features a clubhead that travels straight back along the target line with the face remaining pointed at the golf ball until the wrists hinge. This can only be accomplished by syncing the hands and shoulders.

Another aspect of a good takeaway (and swing, in general) is that the arms remain in front of the chest. Also, notice how the knees remain flexed, with the left knee pointing at the golf ball. This helps produce a tighter coil at the top.

At The Top
If you're great at the top, your chances of success increase dramatically. Notice: A) Todd's left shoulder has rotated to a point directly below his chin (the right will replace it on the downswing), the left wrist has kept from cupping and the right forefinger supports the club; B) The shaft lies parallel to the ground and directly above the right shoulder; C) The right knee has willingly accepted the transfer of weight and held off the tendency to straighten; and D) The left knee is still pointing at the golf ball.

The key to a great top position is to rotate your body behind the ball within the circle defined_Ê by your hips. It's also critical to maintain your spine angle—no lifting of the torso required. Think of keeping your left shoulder as low as possible.

Downswing
Great swings ultimately end up here, with the club arriving at the ball from inside the target line, the butt end of the club pointing at the golf ball and the shaft lying neatly between the two forearms. If you're not right here, you won't maximize your results.

From the top, Todd, like all great swingers of the golf club, unleashes stored energy into the ball by simply unwinding, with the right shoulder rotating down the target line and under the chin. This rapid yet controlled uncoiling occurs without any head movement.

Impact is often referred to as the moment of truth in the golf swing. In my opinion, this lofty title more appropriately describes the

downswing. Impact is but a natural result of what occurred on the way back down to the ball. If your downswing sequence is solid, your contact with the ball will be, too.

_ÊYour priority in the downswing is to keep the clubshaft on the proper plane. You'll know when you're on the correct path when the shaft sits between your forearms midway down. One key for achieving this state is to keep your left shoulder from spinning open too quickly. Your shoulders and hips (following the lead of your hands) should turn in sync, and then keep turning. Also, stay planted! Great swings feature spine angles that are rigid, knees that remain flexed and a steady head.

Impact
Great golfers produce great contact. Here's what I look for:
A) The right side sits slightly lower than the left, which forms a wall to hit through (notice how Todd's left shoulder, left arm, left hip and the shaft form a straight line).

B) The hands have returned to the same position they held at address, with the left wrist as flat as it can be and both hands leading the clubhead into the ball.

C) The right foot has transferred weight to the left without the body or head moving ahead of the ball.

Postimpact
Once you've made contact with the ball, the swing is hardly over. You must continue to unwind and get everything—hands, hips and club—left of your target line. Notice how, in the release, Todd's arms are fully extended and the right hand has rotated over the left. Great. His finish is even better, defined by extreme balance, a straight back and even knees.

One thought on “What Makes A Golf Swing Great”