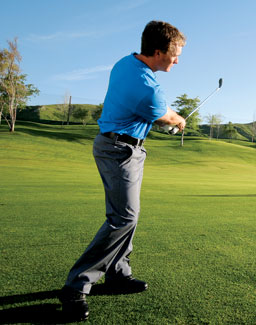 Golf isn't a game of who hits it the best, it's a game of who misses it the least. Even the best players in the world routinely mis-hit shots. In fact, the average Tour player hits only about 12 greens per round! How do they miss one out of every three greens and still manage to routinely shoot under par? Two reasons: steely determination and a red-hot short game. While we may not all be wired with Tiger Woods' killer instinct or have as much time to dedicate to our game as Tour players do, we can find the time to practice the most important shots in the game: those from within 100 yards. They're the ones that require touch, imagination and radar-like precision—three skills that can easily escape us, especially when our games have been dormant for awhile.

So, this spring, before you start swinging for the fence with your driver, spend some time working on your short game—especially if your goal is to knock a few strokes off your index. After working on these shots, you'll amaze your friends, get up and down from everywhere and start playing like a pro.

1. Distance: Sand Wedge
A great drill for buddies (and something that's lots of fun to practice) is to have a friend stand with a baseball mitt at intervals of 30, 60 and 90 yards away from you, then hit balls to him as if the two of you were playing catch. By hitting the ball different distances, you'll gauge the size and rhythm of your swing so that you can consistently hit your target. Practicing this drill is also a great way to learn how to hit soft, high shots.
_Ê 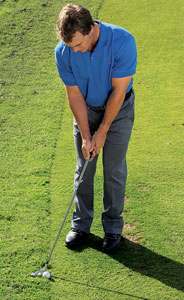 Once you've successfully hit the ball those three distances, try to fill the gaps. Just like throwing a ball to a friend, you'll learn how to hit it the proper distance without thinking about it.
_Ê
2. Greenside Hybrid
Use the newest club in your bag for guaranteed greenside accuracy. Hitting a hybrid is great for when your ball is snug against the collar or if you have a bad lie in some gnarly grass. Because the hybrid glides through the turf without any twisting or grabbing, the result will be a safer, more predictable outcome on some of your toughest shots.

Stand tall with a narrow stance. Place the ball a little back of center, and lean your weight slightly toward the target. From here, it's just a putting stroke. A little pivot toward the target on your followthrough is a good idea as well. Now that's a versatile club!

3._Ê Texas Turndown
This is a great shot to play in Scotland or on those hardpan Texas fairways, when you have to land the ball short and run it out. It's perfect for an approach with no bunkers and lots of fairway leading up to the green.

Using a 7- or 8-iron, place the ball in the center of your stance, and set your weight slightly toward the target. Adopt a shallow, arcing swing where the clubface closes significantly through impact.

The result will be a low, over-spinning type of trajectory that hits and runs to the green like a rabbit. 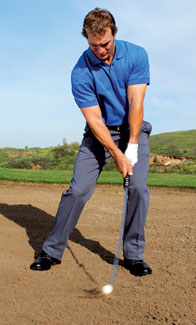 4. Long Bunker
Long bunker shots are considered extremely difficult for even the most experienced players. Reason being, to hit it farther you have to square up the clubface, which leads to a digging effect and, possibly, fat shots. On the flip side, the player must also hit much closer to the ball, which often leads to thin or skulled shots._Ê

The perfect solution for the 40- to 50-yard bunker shot is to simply use a club designed to go farther.

Experiment with a pitching wedge, 9- and 8-iron. As long as the face is open, the club will have bounce, allowing the head to glide through the sand without any dig.

Then simply aim for impact two to three inches behind the ball—just like a normal bunker shot.

5. Pitch/Lob Shot
Missing a green often requires a high, soft pitch that will land close to your target, especially when the pin is cut close to the fringe.

The most important thing is to get into the proper posture, so adopt an open clubface, center the ball and widen your stance. Then lower your knees and the club's handle, and back the shaft away from the target.

Once you've gotten into the proper stance, think big and soft, as a big swing and a soft rhythm will get the job done. WARNING: be careful with your lie! A little cushion helps, and anything on hardpan should be avoided.

Jeff Ritter is the Director of Instruction at the ASU Karsten Golf Academy in Tempe, Ariz. To learn more about his teaching and to read some of his other tips, visit www.jeffrittergolf.com.